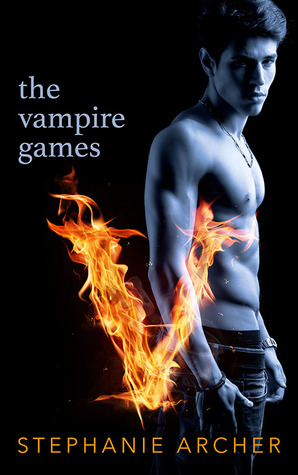 BLURB from Goodreads
My name is Bianka, and I live in a world a lot like yours. Or at least, I used to.

Then I got harvested.

Taken into eerie darkness underneath the surface of my world, I’ve learned that cities like mine – Hidden Oaks – are just places that the vampires keep humans until it’s time to drink their blood. Now it’s my turn. They’re harvesting me.

But I’m fighting hard, and the vampires have noticed. A sponsor is buying me. A handsome, mysterious vampire with piercing eyes, who wants me to fight other humans in The Vampire Games. If I lose, I’ll be harvested. If I win, I’ll join my sponsor, Phillip, as one of them.

I’ll be turned into a vampire.

All I must do to spend an eternity with Phillip is sell my soul.

The scary part? I’d do a lot worse for him than that.

INITIAL  THOUGHTS
I have to admit I was a little skeptical as I approached reading this book, because of the title "The Vampire Games". Part of me wondered if it would be like "The Hunger Games"...I should also say I had become a little bored of the "usual stereotypical vampire" and usual Vampire genre plots. So to say I was going to be a hard possibly critical audience was fair.

FINAL THOUGHTS
Wow what a place to end the first book Stephanie! When can I read more?
Totally loved this book, and didn't want it to end! I was pleasantly surprised and thoroughly enjoyed this book. Yes I certainly want to read more of the potentially brilliant series. I admit being quite cynical to begin with due to the title being "The Vampire Games" being so similar to "The Hunger Games" but it is, in my opinion a totally different  plot base, sure there's a form of  "games" in both books but that as far as the similarities go really.