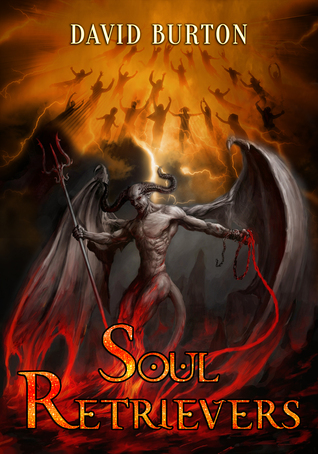 BLURB from Goodreads
What if souls destined for Heaven were sometimes sent to Hell by mistake? Someone would have to go to Hell, retrieve the soul and take them to Heaven Gate. Someone like Getter, a Soul Retriever hired to find a ten year old girl soul, the same age as his daughter would have been. This retrieval, he takes personally.While there, Getter hears a Prophecy saying he will be important to the future of Hell and all Life. He wants no part of any prophecy. Neither does Mephisto, head of Helland Security, since he plans to take over Hell from Satan. Along with Sneaker, a new vampire with a chip on her shoulder just learning how to be a vampire, and new friends, both soul and demon, Getter steals the girl’s soul and races to Heaven Gate with Mephisto in pursuit to the last hellish inch.

David Burton has been a boat builder, sailor, and custom cabinetmaker and has traveled by thumb, motorcycle, and sailboat. Upon returning from sailing in the South Pacific, he turned to writing. His first published book was a mystery, Manmade for Murder. Hell Cop, a supernatural adventure story, was his second published novel. Blood Justice, a vampire revenge novel, will be published by By Light Unseen Media, in 2010. He has also written screenplays, including an adaptation of his Hell Cop and Fear Killer novels. He now lives with his wife in Southern California and is working on more stories and characters that pass thorough his life and brain in both novel and screenplay form.