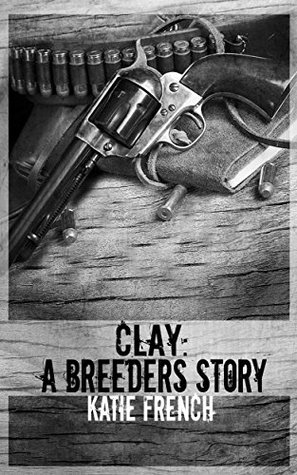 BLURB from Goodreads
When Clay's younger brother is killed, everyone thinks Clay’s to blame. His father won’t look at him, the hired guns don’t respect him, and Clay can’t live with himself. A dangerous mission presents itself, and Clay jumps at the opportunity, knowing it might be his only chance to win Pa’s favor. But the job’s so dangerous even Pa won’t ride along. Can Clay prove himself and earn his guns before someone puts a bullet between his eyes? This prequel novella is approximately 50 pages and can be read at any time throughout the Breeders series.

INITIAL THOUGHTS
As I said in my "Initial Thoughts" for Plan B, I really do enjoy this series, so I was again genuinely looking forward to reading this one. The thing that really bothered me this time was I was once again reading it out of order, after having just read The Benders which is Bk#3 and Plan B which is Bk#2.5 and this one is listed on Goodread's as Bk#4.5. Though I should add Katie has said the novella's can be read at any point during the reading of the Breeder's series.

MY REVIEW
Once again I purchased this novella from Amazon UK, for around 99p which I personally think is roundabout the right price for a novella.
The main feature of this cover is a gun and bullets. Would the cover make me pick this one up from a bookstore shelf? Being totally truthful (which I always try to be) I probably wouldn't pick this one up from a bookstore shelf randomly, unless it was under the specific section of post apocalyptic I really wouldn't pick up a book with a gun featured on it. Knowing it is part of the Breeders Series I would of course snatch up a copy to buy!
So the cover has a gun and bullets on it, which I would say fit's the Clay we know from what I had read about so far in the novels Bk#1 through to Bk#3. This novella as you will guess from it's name is all about Clay. We meet Clay as a younger boy, and learn more about what made him the way he is. We witness the whole incident where Clay and his younger brother Cole, went out and sadly Cole never made it back. It's the incident that certainly still haunts Clay throughout this series. Marlin Tate makes it well known to anyone and everyone around    You also get a closer look at Clay and His father Marlin's relationship. The way Marlin belittle's his son for learning to read, to the point of sadistically stepping and crunching Clay's hard sought after glasses. Marlin call's him sissy boy, pansy-arsed and a four eyed freak! what Clay has to do to be accepted by his fathers men. I loved the luxury of the closer look at Clay, his character and what has made him the person he is now. When reading this novella, the reader learns where Clay developed his protective streak, how he attempted to shield the housekeeper Martha from his father's drunken rages, often putting himself in the eye of the target to deflect his fathers vengeance.
I really enjoyed reading more about Clay, the novella explains quite a lot, especially how and why he slowly coaxed Riley into trusting him.  Though I have to admit to already having a soft spot for Clay's character.
So did I enjoy the novella? I loved it. Learning more about Clay and his brother Cole too.
Would I recommend the novella? Yes, if you already like Clay, you'll love him after reading this novella!
Would I want to read more in this series? Yes! I am seriously loving this series. It's addictive reading!
Would I want to read more by Katie French? Yes, after reading this series I would always checkout the blurb of any book written by Katie French!

FINAL THOUGHTS
Gives great extra insight into the character of Clay...from his childhood....to how he came to claim his first guns. The more I read of this series, the more of it I want to read! I never want it to end!