REVIEW - CONFESSIONS OF A MALE NURSE BY MICHAEL ALEXANDER 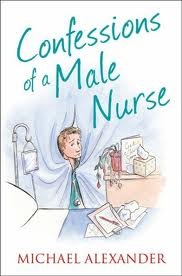 BLURB from Goodreads
From stampeding nudes to inebriated teenagers, young nurse Michael Alexander never really knew what he was getting himself into. But now, sixteen years since he was first launched into his nursing career – as the only man in a gynaecology ward – he’s pretty much dealt with everything: Body parts that come off in his hands; Teenagers with phantom pregnancies; Doctors unable to tell the difference between their left and right; Violent drunks; Singing relatives; Sexism; . . . and a whole lot of nudity.
Confessions of a Male Nurse is a touching, shocking and frequently hilarious account of one man’s life in nursing.

INITIAL THOUGHTS
To say I have had this one on my kindle a while is I guess an understatement, so when I was looking for a little humour, something to make me laugh and lift my mood too!

MY REVIEW
I downloaded a free e-copy of this one from Netgalley in exchange for my honest review. As I said in my Initial Thoughts section above I wanted an uplifting, lighter read so decided to give this one a go.
The cover of this book shows what I guess you could say is a typical "hospital scene", a bed with patient notes scattered on it, the patients bedside table with the half dead drooping flowers, a box of tissues. the curtains closed around the bed with a male nurses head poked through the curtains. the expression on the nurses face is that he is probably seeing something rather shocking or grim and sickening! Would the cover make me pick this one up from a book store shelf? Yes, the cover has a comedy element about it so I would pick it up to read the blurb.
I think its fun to get an insider look at other professions from a Male Nurse, A GP, to an Air Hostess or Checkout Girl. For the Nurse, GP, Teacher or Air Hostess to share the humorousness things in their job as well as the more serious ups and downs of their daily tasks.
In this book Michael Alexander is a Male Nurse, originally from New Zealand who decides to travel for a while so gets a working visa and comes over to London, England and signs up with a nursing agency. Michael works on many different wards, meeting different bosses with different managerial styles, lots of Doctors with varying degrees of attitude and professionalism towards their job and patients.
The one thing that continually strikes you throughout the book and all the comedy is that Michael not only genuinely cares about the patients he is allotted to care for as well as any other patients that are around him on the ward too. He is the type of Nurse that I personally would say I'd want to be caring for myself or one of my loved ones were they in hospital. Michael is prepared to go that extra mile. One great example of this is there is one elderly lady who really wants and needs a shower but there never seems to be time to help her, Michael gives up part of his lunch break to set things up in a shower stall that is quite inadequate, but he perseveres and this lady is so grateful when she has had her shower, to the point the reason she is in hospital actually improves and sets her well onto the road to recovery.
Of course there are also times that Michael feels like walking out of his shift when there aren't enough members of staff to do the hourly checks and turns that they should be doing to prevent bed bound patients getting bed sores etc.
Michael also finds himself being given the jobs no one else wants as he is the "newbie" "agency nurse".
So did I enjoy the book? Yes, it was the lighter read I felt I needed at the time. I enjoyed reading this book. Would I recommend the book? It certainly give an insight into hospitals and their staffing levels and standards. Michael compares staff to patients ratio both in New Zealand and here in the UK. Would I want to read more about Michael Alexander and his nursing career? I think I would yes. I enjoyed the chatty style of this book and at the end of it, Michael tells us he is going on to be a "school nurse" at a private boarding school in Switzerland. Would I want to read other "Confessions of" titles? I have actually read other Confessions titles such as Confessions of a GP etc, I think I also have one or two on my kindle waiting to be read.

FINAL THOUGHTS
Insightful and eye opening, makes you smirk, snicker, chuckle and giggle throughout too.