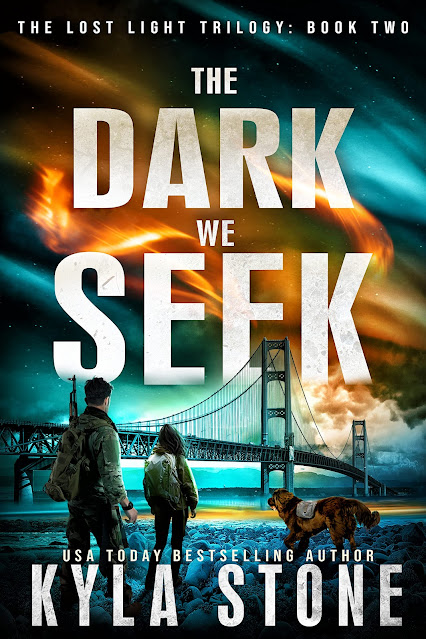 BLURB from Goodreads
Darkness spreads across the globe...

As tens of millions of people grapple with a new reality without power, a serial killer hunts in the chaos. Alger County Undersheriff Jackson Cross is determined to stop him, no matter the cost.

Torn between vengeance and a chance at redemption, ex-convict Eli Pope faces his greatest test, while Lena and Shiloh Easton struggle to survive in a world that grows deadlier by the day.

But nothing can prepare them for what comes next…

Set in the rural wilderness of Michigan’s Upper Peninsula, The Dark We Seek is the riveting second installment in the CME/EMP survival series by USA bestselling author Kyla Stone.

REVIEW
Wow! What a journey this book takes you on! Just when you think you have every detail worked out and it's over, it isn't!!

Really sad start when Cody's body is found both something Lena wanted yet dreaded finding at the same time. Then as Lena & Shiloh settle into their new home at the lighthouse they have violent intruders to deal with alone as Eli is off on his own part of what ends up being the joint mission of finding the serial killer that partnered with Walter Boone.

I have to highlight that i adored the "power struggle triangle" experienced within a certain scene in this book between, Eli, Jackson & Sawyer.
Each man attractive, strong & principled in their own way. Each choosing to live/survive this post Apocalyptic world. All 3 still having that achilles heel within the Easton family, whether its was Lily or Cody or is Lena or Shiloh.
It seems Lily really did love the authoritarian strong bad boy image, Sawyer, Eli, Jackson.

I must admit I loved the little twist, the little 'spanner in the works' that means Walter Boone's partner didn't actually murder Lily by his own hands, it seems theres is yet another accomplice, or copycat that knew the quirks & calling cards left by Boone & his partner. Its certainly a fantastic cliff hanger!! One minute you're thinking all solved, all loose ends tied up......and then just one thing out of place to unravel things again.

I have my suspicions and I sadly think it's going to be a highway to heartbreak and hellish choices for Jackson. Will he be capable of delivering justice, and/or preventing Eli, Sawyer or others delivering their new form of immediately actionable consequences.

I have so many scenarios and theories around
the 'messier killing' of Lily Easton. Could it have been done by a female, or third accomplice in attendance? Was Lily murdered by this third individual in a fit of jealous rage because of all the attention Lily got from the local men including her own boyfriend? Or was this third person interested in Lily and she refused them? There's so much more to come in book 3. Will Jackson keep his new found information to himself or share it with Eli, Lena & Shiloh.

On what else could happen next I am hoping for a happy family unit consisting of Eli, Lena & Shiloh, and maybe a little love & romance for Jackson & Devon. However, with Sawyer wanting to rule over the area and the fact he still has an army at his disposal it's only a matter of time until he comes up against the principled Jackson & Eli.