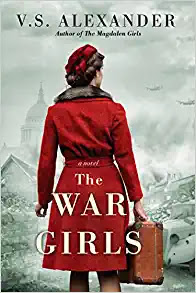 BLURB from Goodreads
It’s not just a thousand miles that separates Hanna Majewski from her younger sister, Stefa. There is another gulf—between the traditional Jewish ways that Hanna chose to leave behind in Warsaw, and her new, independent life in London. But as autumn of 1940 draws near, Germany begins a savage aerial bombing campaign in England, killing and displacing tens of thousands. Hanna, who narrowly escapes death, is recruited as a spy in an undercover operation that sends her back to her war-torn homeland.

In Hanna’s absence, her parents, sister, and brother have been driven from their comfortable apartment into the Warsaw Ghetto. Sealed off from the rest of the city, the Ghetto becomes a prison for nearly half a million Jews, struggling to survive amid starvation, disease, and the constant threat of deportation to Treblinka. Once a pretty and level-headed teenager, Stefa is now committed to the Jewish resistance. Together, she, Hanna, and Janka, a family friend living on the Aryan side of the city, form a trio called The War Girls. Against overwhelming odds and through heartbreak they will fight to rescue their loved ones, finding courage through sisterhood to keep hope alive . . .

REVIEW
Wow, what an emotive book telling the stories that those that perished in the Ghetto who took great risks to make sure what happened was written down, to be told and never forgotten.

Amazing, believable characters. Well written, really makes you think which character would you have been most like...Hanna/Greta-SOE Stefa-Ghetto resistance fighter, Perla- matriarch of the family seeing everything crumble around her or Janka, a Catholic woman, married to a drunken, increasingly abusive man, who refuses to turn her head away from the plight of the Jews, particularly the Majewski family, despite the dangers to herself from her own husband and the Nazis should she be found helping them in anyway.
Then there's the male characters Izreal-patriarch of the family, a holy man, who fades before his families eyes, Daniel-the boyfriend of Stefa, becoming a policeman in the hope that will give those he loves some protection, then resistance fighter, Aaron-a young boy who grows into a man under the Nazi oppression, determined to fight back one day and in the meantime commits as many small acts of defance as he can get away with, Zeev-best friend of Aaron who though he ends up on the outside of the Ghetto Walls still suffers terrible hardship and danger whilst trying to help others, & Eryck helps house a, SOE yet trapped between wanting, & needing to do something, to fight back, yet keep his safe at the same time.