BLOG TOUR - SILVER IN THE MIST BY EMILY VICTORIA

Silver in the Mist by Emily Victoria is a YA fantasy featuring asexual representation that follows a palace spy sent to infiltrate a neighboring kingdom in hopes of returning magic to her dying land. 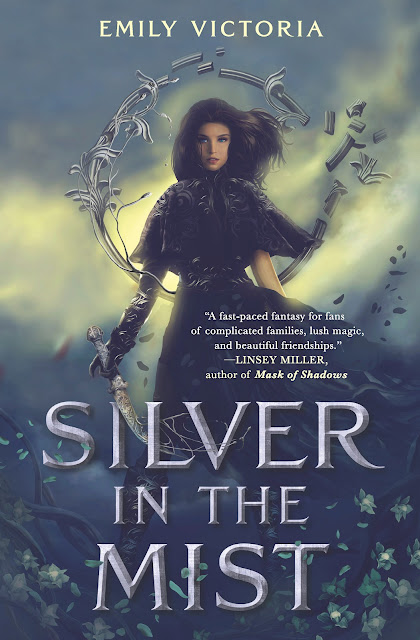 BLURB supplied by Harlequin Trade Publishing
Eight years ago, everything changed for Devlin: Her country was attacked. Her father was killed. And her mother became the Whisperer of Aris, the head of the spies, retreating into her position away from everyone… even her daughter.

Joining the spy ranks herself, Dev sees her mother only when receiving assignments. She wants more, but she understands the peril their country, Aris, is in. The malevolent magic force of The Mists is swallowing Aris’s edges, their country is vulnerable to another attack from their wealthier neighbor, and the magic casters who protect them from both are burning out.

Dev has known strength and survival her whole life, but with a dangerous new assignment of infiltrating the royal court of their neighbor country Cerena to steal the magic they need, she learns that not all that glitters is weak. And not all stories are true.

The camp around me is shadowy and asleep—vulnerable—just the way I like it. At my back, metal poles hold lanterns that let out an erratic flicker of a glow. But it doesn’t reach as far in as I am, and even the patrolling soldiers barely stray from their circles of firelight. It’s sloppy, this whole camp.

I feel, rather than see, someone slip into the shadow of the tent behind me.

Lochlan’s jesting voice is that low tone that barely carries as far as my ears. I shift closer to the canvas of the tent so they can crouch beside me. “Fancy seeing you here,” they say.

Even though this is serious, my own lips twitch in response. Like me, Lochlan is dressed in tight-fitting clothes with their hood up, dark and practical and perfect for getting up to no good. They tug the strip of cloth covering their face down as they let out a huff. “This thing gets so itchy.”


I raise a brow. “That’s not regulation.”

They give me a look, but it’s edged with that sharp ex­citement neither of us can hide in the field. It tingles in my own fingertips. I want to get on with it, but as always, the Whisperer’s voice echoes in my head, tempering the impulse.

Take the time to observe. Know the lay of the land.

No matter how many missions I do, how much experience I think I’ve gained, it’s always my mother’s voice that sounds in my head out here in the field.

I scan the tents in front of us. There are three of them in the inner circle, five in the outer. If this camp has the usual layout, then the barracks, the mess, and the supplies will be in the outer tents. The scribes and those in command—in other words, everyone important—will be in this inner ring.

The tent on the far left is larger than the two beside it. All are in that deep navy color that is dyed even darker by the night, which only serves to offset the fabric’s silver lining. The canvas is thick enough that even if there was light inside the tents, we wouldn’t be able to see any silhouettes. It doesn’t give us much to go on, but at least it means once we’re inside, no one will be able to see us either.

“Captain’s quarters are in the middle. The large one on the left is for the scribes. The last one houses the captain’s two pages.”

“So are the captain’s office and his sleeping quarters the same?”

I stifle my sigh. That will be a pain to deal with, but it’s not like we haven’t done it before. Multiple times. “The scribes?”


“They sleep with the soldiers as far as I can tell.”

That’s promising. I scan the area. The captain’s tent is the only one with a guard. The man is bored, idly fiddling with his sword’s sheath. He wears a tunic of soft blue lined with white, so neat it looks as if it’d get dirty if the guard glanced at the ground wrong.

“We can take him,” Lochlan says.

I elbow them. “No evidence outside of the theft, remem­ber?” The scribes’ tent isn’t guarded, and there’s barely a foot of space between it and the captain’s tent beside it. That’s our best chance. “This way.”

We track down the row we’re sheltered by, moving from shadow to shadow, aware of the guards and the torchlight hovering just around the corners. At the end of the lane, I wait for the guard’s attention to shift and then we’re just two shadows slipping over the grassy gap. The canvas of the scribes’ tent is secured with thick ties, and I undo the row to let us in.

The space is shadowy in the dark and I take a moment to let my eyes adjust. Rows of portable desks fill the tent so tightly I have to step carefully as I ghost between them, Lochlan behind me.

The desks are littered with papers and worn writing im­plements, and among them lie pieces of filigree. The deli­cate swirls of the silvery patterns shine in the darkness, like fallen pieces of moonglow. My fingers hover over them. We aren’t supposed to leave any evidence, but I can’t resist swip­ing a couple of the shards into my pocket. This is a Cerenian camp. They won’t notice one or two missing pieces of fili­gree, while we need all the stolen magic we can get.

Behind me, Lochlan pauses as they look at the filigree.


Even though I can’t make out the expression on their face from this angle, I know what will be there. Loss.

I nudge them. “Bet you a week’s worth of chores I can find what we need first.”

Lochlan’s eyes glint in the dark as they grin. “You’re going to regret that.”

A couple more ties get us out the far wall, and I give a quick glance to make sure the guard can’t see us before slip­ping into the captain’s tent.

He’s a snorer. That much is obvious as we step in and a grinding noise like rocks being smashed together echoes over to us. Lochlan’s face contorts in laughter and I grab their face cloth and yank it back over their mouth.

There’s not much in here. Besides the bed, the only things are a camp desk and a chest. Well, that and the clothes scat­tered all over the place. There’s even a discarded sword not a foot away from where I stand. He’s not a strict captain then. I’m betting he’s the type to leave his papers lying out rather than filing them away at the end of the day.

I take the desk and sure enough, it’s cluttered with writ­ing instruments and parchment. The Whisperer ordered us to bring back the original orders from the Cerenian monarch that sent these soldiers here. I don’t know exactly what they will say, but I can guess. There are a number of patrolling camps that work their way up and down the Cerenian bor­der, making sure it’s secure. Normally they follow the exact same route. This camp, though, is well into the neutral ter­ritory of the Peaks.


The last true attack from Cerena was decades ago, long before I was born, but that doesn’t mean they aren’t planning another. I can’t see why else they would have strayed so far into the Peaks, when it’s such difficult territory to cover. We can’t face the Mists and an army.

My fingers shift through the papers, careful to disturb them as little as possible. Then in the dark, I catch the image of a songbird sitting on a branch: Cerena’s royal seal. The orders themselves are written in code but that seal means this is what we’ve come for.

I lift the paper high, so Lochlan can see it.

The snoring cuts off. I drop to a crouch behind the desk. As I peer around its edge I see the captain blinking sleepy eyes open.

I look at where Lochlan is hiding behind the chest. They’re closer to where we entered than I am. They should be able to get out if they move right now, before the captain is fully awake.

I wave my hand at them. They hesitate, but I give them a glare. Moving as silent as a shadow, they’re gone.

There’s a creak from the bed as the captain gets up, mut­tering beneath his breath. His footsteps come closer, padding over the canvas floor. My hand finds the knife at my hip. As soon as he’s close enough, I’ll jab the knife in his leg. Then I’ll run.

His feet come into view and I’m tensing to move when there’s a panicked shout from outside. It’s taken up, the sound multiplying.


What did Lochlan do?

The captain grabs his boots and races outside. As soon as he’s gone, I slip out the side of the tent. I smell the smoke the moment I’m free, the ring of light at the eastern outskirts of the camp now shining decidedly angrier.

“A lantern has fallen!” someone shouts. “Bring water!”

The camp is a flurry of activity. All of the soldiers, most only half-dressed and with mussed hair, are heading one way. I catch a clear moment and dash in the opposite direction.

I dart between the tents, breaking out of the last line and plunging into the forest at the base of the mountain. It’s darker beneath the trees, the branches scratching at my clothes, and even though I’m risking a broken ankle, I don’t slow. Better a broken ankle than an arrow in my back.

The ground beneath my feet turns from moss to dirt to stone, and the forest fades as I track up the path.

I turn the corner, and there it is.

A wall of white clings to the mountain like a shroud. It’s so thick I can’t even make out the rocks in it. All I can see are the flashes of lightning deep in its depths, bright and fierce.

Lochlan sits on a rock just outside the border of white, idly swinging one of their legs. Their hood is already down, showing their auburn hair with the single streak of gray, cur­rently tied back into a ponytail. The filigree lantern we’d hid­den on our way down shines at their feet, sparking off their bright green eyes.

I tug the cloth away from my face. “What did you set on fire?”

They grin at me. “You’re welcome.”

There’s a shout behind us from the direction of the camp and we plunge into the Mists.

Excerpted from Silver in the Mist. Copyright © 2022 by Emily Victoria. Published by Inkyard Press.
ABOUT THE AUTHOR 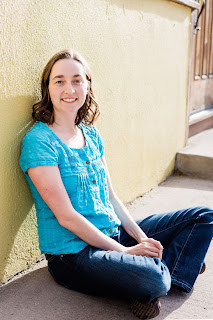 Emily Victoria is a Canadian prairie girl who writes young adult science fiction and fantasy. When not wordsmithing, she likes walking her overexcitable dog, drinking far too much tea, and crocheting things she no longer has the space to store. Her librarian degree has allowed her to work at a library and take home far too many books.