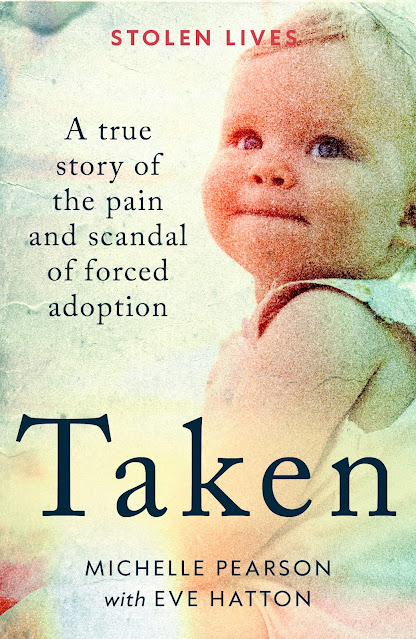 BLURB from Goodreads
In 1972, Michelle Pearson gave up her son for adoption.

As ‘one of those girls’, she was expected to hide her shame with secrecy. No one should ever find out she’d had a child.

But she never forgot the son who was taken from her.

In the years that followed she struggled with PTSD, traumatic memory loss, agoraphobia and anxiety – impacting every area of her life.

This is Michelle’s story of love, loss and hope; of how over 50 years she has managed the consequences of living with her secret, survived the emotional pain, and finally, after being reunited with her son, the journey to rebuild their lives together.

REVIEW
The byline heading at the top of the book cover "Stolen Lives" fits perfectly as although Michelle did have a life, and so did her son Tim/John who was taken from her, they did have their opportunity at a life together stolen from them by a group of people and organisations who thought being an unwed mother was the fault of the young girl/woman and that they knew better. Rather than support the girl/woman with her child if that is what the girl/woman wanted they "knew best" and all but a few were railroaded into giving up their precious babies for adoption.

Michelle's story is told in a very matter of fact way, stating facts, timelines, dates etc. I think Michelle tells her story in a very forthright manner, straight to the point. I have read other similar stories of forced adoption and I think this style of telling her story about being forced into putting her precious baby son should not be mistaken as coldness, but as a way to try to reign in the tumultuous emotions she must have had to revisit to write this book.

It's almost as if Michelle has had to separate herself from 'young pregnant Michelle' it was in a different era at times in the books it's as if it happened to a different person too but it's important to remember this isn't a fictional story, this actually happened to Michelle, to real people, real lives were and are still affected.
Utmost respect to Michelle for holding back & accepting her sons decision to keep their reunion a secret from his adoptive parents. It must have been a difficult secret to keep as well as agony emotionally keeping it secret too.

I guess Michelle had a 'happy ending' in that she was reunited with her son and is part of his life, not everyone gets this favourable ending. It could have been so very different for Michelle if Tim/John's adoptive mother had got her way. Also can it truly be called a 'happy' ending after all the heartbreak Michelle went through, she was seen as the 'bad' girl from the moment it was revealed she was pregnant.....it takes two to make a baby! Yet Tim was seen as being the 'responsible one.' The 'loose morals' label was definitely hung around Michelle's neck and made heavier to bear both during her stay at the mother and baby home and afterwards in her adult life. I found myself shaking my head, gritting and grinding my teeth in anger at how Michelle was made to feel by those around her. It's so easy to dismiss it all as being down to the era she was living in, her parents religion etc. I dread to think how many women are out their grieving for lost children. The ones too scared to try to make contact, or where there is not enough information or even where the adopted child refuses contact.

I was equally shocked and horrified that this actually happened so recently, I guess it happening in 1972, when I myself was born in 1971 made me feel like it wasn't that long ago. This also led me to the question when did this "forced adoption" actually stop. Sadly I don't think lessons have been fully learnt as those in power with authority seem to always think that they 'know best'. That there is a 'one size fits all' solution to every/any problem or issue that arises.

Summing up, though it feels odd and wrong to use the word 'enjoy' in connection to such a heart rending book but I did enjoy reading it, I found it thought provoking and informative. It made me think about what sort of pressure is put on young pregnant girls these days, or are they given the whole picture as there seems to be much more help available now. I struggled a little at the beginning, not getting on well with the style in which Michelle's story was being delivered. However, I was pulled into the book more and more as time went on, was in tears in quite a few places within the book and wanted to reach through the book and hug both 'young Michelle' and older Michelle on many occasions.