BLOG TOUR - THE GIRL FROM GUERNICA BY KAREN ROBARDS

Masterfully rendered and vividly capturing one of the most notorious episodes in history, The Girl from Guernica is an unforgettable testament to the bonds of family and the courage of women in wartime. 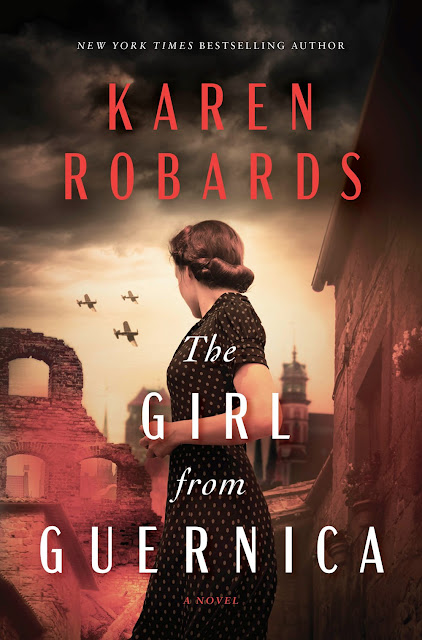 BLURB supplied by Harlequin Trade Publishing
On an April day in 1937, the sky opens and fire rains down upon the small Spanish town of Guernica. Seventeen-year-old Sibi and her family are caught up in the horror. Griff, an American military attaché, pulls Sibi from the wreckage, and it’s only the first time he saves her life in a span of hours. When Germany claims no involvement in the attack, insisting the Spanish Republic was responsible, Griff guides Sibi to lie to Nazi officials. If she or her sisters reveal that they saw planes bearing swastikas, the gestapo will silence them—by any means necessary.

As war begins to rage across Europe, Sibi joins the underground resistance, secretly exchanging information with Griff. But as the scope of Germany’s ambitions becomes clear, maintaining the facade of a Nazi sympathizer becomes ever more difficult. And as Sibi is drawn deeper into a web of secrets, she must find a way to outwit an enemy that threatens to decimate her family once and for all.

To laugh and dance and live in the teeth of whatever tragedies an uncaring fate threw in your path was the Basque way.

The stories Sibi’s mother told, stories handed down through generations of indomitable women, painted those defiant suf­ferers as heroes.

Sibi feared she was not the stuff of which such heroes were made.

She was hungry. Her feet hurt. And she was afraid. Of those things, afraid was the worst by far. She was so tired of being afraid.

A knot in her stomach. A tightness in her throat. A prickle of unease sliding over her skin. Familiar sensations all, which did not make their sudden onset feel any less dreadful. Sixteen-year-old Sibi—Sibil Francesca Helinger—pushed back a way­ward strand of coffee-brown hair that had escaped from the heavy bun coiled at her nape and frowned out into the misty darkness enshrouding the Calle Fernando el Católico. Her

pulse thrummed as she clung to the desperate hope that she was not seeing what she thought she was. Since the fighting had moved close enough so that the residents of this ancient village high in the western Pyrenees could actually hear gun­fire in the surrounding hills, fear had become her all-too-fre­quent visitor. But this—this was different. This was because of something that was happening now, right before her eyes, in the wide, tree-lined street just beyond where she stood watching the regular weekly celebration on the night before market day.

Have we left it too late? The thought made her mouth go dry.

“I want a sweet.” Five-year-old Margrit’s restless movement beside her reclaimed her attention. Gripping the child’s hand tighter, Sibi cast an impatient glance down.

“There’s no money for a sweet.” Or anything else, Sibi could have added, but didn’t.

“But I want one.” Round blue eyes in a cherubic face sur­rounded by gold ringlets stared longingly at the squares of honey and almond turrón being hawked to the crowd by a woman bearing a tray of them. The yeasty aroma of the pas­try made Sibi’s stomach growl. For the last few weeks, she and her mother had been rationing their diminishing resources by skipping the evening meal so that the younger ones could eat.

“Ask Mama to buy you one later.”

Margrit’s warm little fingers—which Sibi kept a secure hold on because, as angelic as the youngest of the four Helinger sisters looked, she wasn’t—twitched in hers. “She won’t. You know she won’t. She’ll say she doesn’t have any money, either.”

That was undoubtedly true. In fact, Sibi had only said it in hopes of placating her little sister until their mother returned. Thinking fast—Margrit had mostly outgrown tantrums, but not entirely—Sibi was just about to come out with an alternate suggestion when thirteen-year-old Luiza jumped in.

“You know we’re poor now, so stop being such a baby.” Cross because she hadn’t been permitted to go to the cinema

with a group of her friends, Luiza spoke sharply. The thick, straight, butterscotch blond hair she’d chopped to chin length herself the night before—”Nobody has long hair anymore!” she’d wailed in the face of their mother’s horror—had already lost its grip on the rag curls she’d forced into it. She looked like she was wearing a thatch of broom straw on her head, but Sibi was far too good a sister, and far too preoccupied at the moment, to point that out.

“I don’t like being poor.” Margrit’s lower lip quivered.

Luiza cut her off. “You’re whining. You know what Mama said about whining.”

A match flared in the street. Tuning her sisters out, Sibi fo­cused on what the brief incandescence revealed as it rose to light a cigarette—red tip glowing brightly—before arcing like a tiny shooting star to the ground. Sibi looked beyond the ciga­rette to the dark shape behind it. The dark shapes behind it. She wasn’t mistaken. Soldiers—their soldiers, the loyalist Republi­cans, their uniforms unmistakable—poured into the street from seemingly everywhere. And the numbers were increasing…

Her heartbeat quickened. Does no one else see?

Biting down on her lower lip, she glanced around. The crowd clapped and swayed to the rollicking music of the highly prized town band and ate and danced and played games and— She concluded that no one else did. The village leaders who were present appeared unaware: Father Esteban talked to the woman behind the refreshment table as she ladled out a bowl of spicy fish soup for him; His Honor the mayor played mus, the popular card game, with three friends; the Count of Arana, the town’s most prominent citizen, stood with his arms crossed and a stern gaze fixed on his fifteen-year-old daughter, Teresa,

as she walked away from him with her hand tucked into the arm of… Emilio Aguire.

Watching them reminded her of just how much of an out­sider she was here in this quaint small town with its red-roofed white houses and narrow cobbled streets. Emilio was her age, he was the handsomest boy in school and he had been kind to her. She had hoped… But no. To hope for anything where he was concerned was foolishness. She and her mother and sisters were only temporary residents. She worked as a part-time wait­ress and her mother had worked in a dress shop before being fired three weeks ago, when the shop owner’s husband had displayed too much interest in her. And that, of course, had immediately become a topic for much discussion among the town gossips whose gleeful suspicions that the former Marina Diaitz, now Helinger, who had come home with her children but without her husband, was a floozy were thus seemingly confirmed. All those factors combined to put them near the bottom of the social ladder in this place where the wealthy local aristocracy had been comfortably in place for generations, and they, with their German father, would have been outsid­ers, anyway. And Teresa was beautiful and rich and— Well, there it was, foolishness.

She had no time for foolishness.

Glancing at those in her own party—Luiza and Margrit, and their other sister Johanna, all bunched close around her, and their mother, Marina, dancing merrily with the baker Anto­nio Batzar beneath the colored lights strung above the make­shift dance floor in hopes of securing a scarce loaf of tomorrow morning’s fresh bread—Sibi felt her heartbeat quicken.

Intent on their own concerns, they appeared oblivious to anything else. As usual it was up to her, notorious as the fam­ily worrier, to think about what might happen, to catch and make sense of what the rest of them missed.

Tonight, it was that their soldiers, their last line of defense against the surging rebel Nationalists, appeared to be coming together en masse to slink like starving cats past the Sunday night festivities.

These were the same war-weary, battle-scarred troops that had been camped out in the forested peaks surrounding the town since they had fallen back after the savage attack on the neighboring village of Durango that had brought the nine-month-old civil war as close as its ancient churches and ram­bling streets. In the days since, thousands of panicking refugees had flooded the town. The warships of Generalissimo Francisco Franco, commander in chief of the rebel forces, had blockaded the Basque ports. Food had become scarce: along with bread, milk and meat were almost impossible to obtain. People were hungry, frightened. The war that had been safely on the other side of the country had changed direction so fast that the resi­dents of these sleepy villages high above the Bay of Biscay had been caught unprepared. But unprepared or not, in a new and terrifying offensive the newspapers were calling the War of the North, the fighting was now rushing like a wave toward their front door. 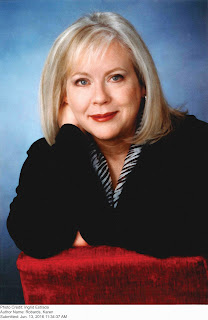 Karen Robards is the New York Times, USA TODAY and Publishers Weekly bestselling author of fifty novels and one novella. She is the winner of six Silver Pen awards and numerous other awards.