REVIEW - KIKI IN THE MIDDLE BY ANN MALASPINO 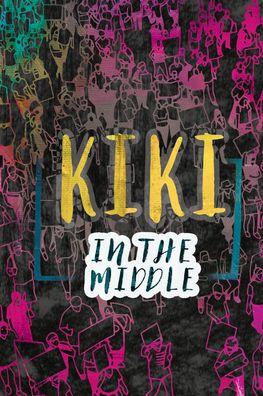 BLURB from Goodreads
Kiki is a teen artist living with her Greek-American family in Queens. After a man with mental illness is killed by police, protests fill the streets. Kiki's into art, not activism, and would rather observe from the sidelines than participate, but she reluctantly joins her friends on a march. She is shocked when a protestor lifts up a photograph of her brother, Stravros, and one word―#Murderer. Stavros, a police rookie in his first week on the job, says he was just defending himself. But Kiki’s friends, and thousands of protesters, news reporters, and politicians, say he should be in jail. Kiki must decide who to believe, and what to do about it. Even artists can't stand on the sidelines forever.

REVIEW
The story of a young girl, Kiki who loves art but chooses only to use charcoal, never colour. Kiki signs up for an art class and attends with a mixture of very different characters. Kiki's brother shoots a mentally ill man called Ray during his shift as a Police Officer. The book tells how those around Kiki cope with the news. Kiki doesn't automatically jump to her brothers defence, though she cannot condemn him as her best friend would have her do either. Kiki learns the facts about what actually happened, she meets Ray's parents and educates herself about his mental health issues. As the title says quite simply Kiki finds herself literally 'in the middle' her family naturally support her brother Stavros and expect her to do the same, whereas her friends see the wider picture, know her brothers faults, and can only see Police brutality. Kiki has so much going on, damned no matter which 'side' she falls on.
Her only distraction and escapism is her art classes but soon the man her brother shot even haunts those. Her art class undertake many different drawing tasks, their final artwork to be worked on together is to paint a mural. With the support of her art group friends particularly 'Green eyed boy' who usually only draws hands, Kiki brings both sides of the argument/incident whilst at the same time shows the similarities between the two men at the centre of it.

I really enjoyed this short book. Very cleverly written, fast paced and so much covered within it.

Great, believable, and relatable characters put in an increasingly common situation. Perfect conversation starter book. I certainly found it captivating as well as thought provoking.
Posted by Jeanz xx at 03:00