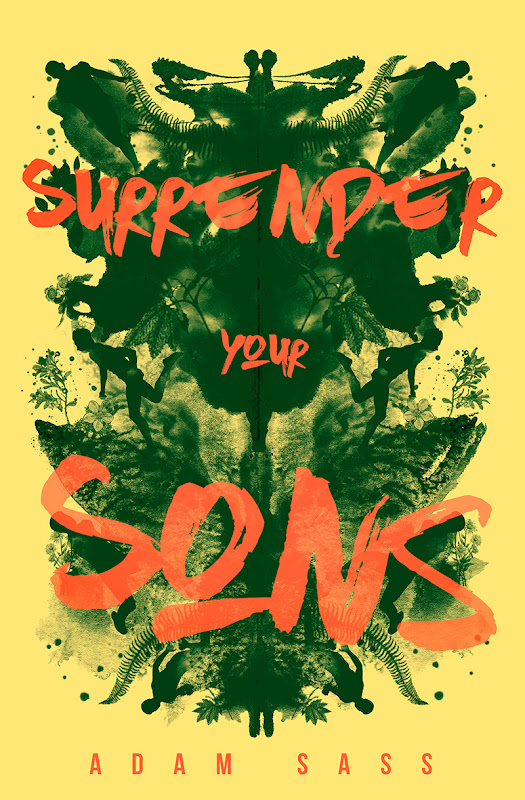 BLURB from Goodreads
Connor Major’s summer break is turning into a nightmare.

His SAT scores bombed, the old man he delivers meals to died, and when he came out to his religious zealot mother, she had him kidnapped and shipped off to a secluded island. His final destination: Nightlight Ministries, a conversion therapy camp that will be his new home until he “changes.”

But Connor’s troubles are only beginning. At Nightlight, everyone has something to hide from the campers to the “converted” staff and cagey camp director, and it quickly becomes clear that no one is safe. Connor plans to escape and bring the other kidnapped teens with him. But first, he’s exposing the camp’s horrible truths for what they are— and taking this place down.

REVIEW
It was the bright yellow colour of the cover that attracted my eye, then the title “Surrender Your Sons” made me curious as to what the book was about. The genres I have seen listed for this book are Teen, YA and LGBTQIA which I agree with but it is also so much more. I am not a Teen reader yet thoroughly enjoyed reading this book. I’d say it has lots of elements within it such as mystery, thriller, suspense and it covers some really emotive subjects. The book deals with “coming out” to your family, their reactions as well as your wider community’s reactions too.

The main character in the book is Connor Major, who lives in Ambrose, Illinois. A place he describes as in the middle of nowhere. Connor lives with his mother, Marcia Major, as his father left them years ago and has had very little to do with Connor since. Marcia Major works at the local hospital caring for preemie babies.

The Majors nearest neighbour is Reverend Stanley Packard who seems to float around Ambrose with all the women, including Marcia fawning over him and basically hanging on his every word and request. Connor has an Iranian boyfriend, Ario who is older, and much more experienced as well as further on his life. Ario’s mother and family are supportive of him being gay, which is probably why Ario not only encourages, but pressures Connor into officially “coming out”. Unfortunately for Connor, his mother is shocked and annoyed, so much so that her reaction is to confiscate Connor’s phone and not allow him out. Connor briefly dated Vicky, who he now looks upon as his best friend. Vicky is pregnant by an older man whose identity she is determined to keep secret. Unfortunately for Connor this makes people resume he is the father of her baby. The sad thing is his mother Marcia indicates she would be quite happy if this was the case, and tries to pressure her son into “stepping up” and “taking responsibility” for Vicky and her baby. Connor’s mum does attempt to punish her son by not allowing him to see his boyfriend and by signing him up to do meals on wheels for the Reverend. It’s whilst doing this that Connor meets Ricky Hannigan. Ricky has had some sort of accident and is paralysed, the Reverend stresses to Connor he must treat Ricky and his mother like VIP’s and always be on time. Ricky lives in the area that Ario does so naturally Connor takes the opportunity to visit his boyfriend but instantly regrets this when he is spotted coming out of his boyfriend’s home by the Reverend who is keeping a close eye on him. After that Connor is accompanied on his meals on wheels round by the Reverend. When Ricky suddenly dies he leaves a musical programme for Connor with the words “Help Connor” and “Nightlight” on it. It’s not until later that Connor realises Ricky is attempting to send him some sort of important message.

Then one evening he is woken from his sleep, restrained, bundled into a van and taken to an Island to basically “make him straight”. He isn’t the only person on his way to the Island, he meets Molly who has a girlfriend and her family have also paid to have their child “made straight” too. Both Connor & Molly are handled roughly and quite badly that first night but its just the beginning of their journey. Connor begins to realise this is the place called Nightlight that Ricky was trying to warn him about.

There’s a real mixed bunch of people at the camp, from 20 yr old rich male model, to young teens. Connor soon discovers that he isn’t the only one who has a parent that doesn’t understand him. At some point within the book all the characters attempt to fake being “normal” to pass the tests and classes they are subjected to. There is one particular class led by the awful Ramona where they have to pair up into “normal couples” and go on a date. The jobs the campers/prisoners are given are very gender specific too, such as Molly cleaning, Darcy waitressing. The punishments are archaic and very “boot camp-esque” even staff members can be subjected to them.

There’s lots of great characters in this book, so its hard to choose just one favourite. I loved Darcy Culpepper, who is described as wearing a retro bob wig. This description had me thinking of Frenchie from Grease and the whole Beauty School Drop Out scenes! It turns out that Darcy is much more, wily and knowledgeable than she is given credit for. Darcy knows things, secrets, about the staff, pupils and what is going on at Nightlight, than you at first think. Another character I liked even though she was only in the book for a few quick scenes was Ario’s younger sister. The one who Connor gave $10 to, as she wanted to donate it to a page of the Aunt of a male model who had disappeared, thought to be being held captive at some weird place that was going to make him straight. Connor empathises with the male model as it appears most of his family have turned against him since he came out just like Connor’s mum has with him. He also likes Ario’s little sister, thinking its great that she wants to help, and is so accepting of both her brother’s and his sexuality.

Now to characters I loved to hate! Well of course the pious, foreboding Reverend Stanley Packard the man in charge at Nightlight. The same man that strides around Ambrose that everyone bends over backwards to please and impress. Then there’s the crazy Miss Ramona Hayward or Miss Manners as the campers nickname her. Ramona is likely to strike out and hit or scratch you if you don’t say what she considers the right thing. Ramona is also the camp nurse, so that’s a great combination when she injures someone, then has to deal with what injury she has inflicted on them. Though Ramona isn’t the only violent one at Nightlight, Briggs is the one in charge when the Reverend is back in Ambrose. Briggs also lashes out and punches and pushes the campers around to make them do what he wants.

The book is told in different series of timelines/memories. There’s Connor “Before” he came out, Connor “After” he came out but “Before Nightlight”, then the “Present” which is Connor at Nightlight and then right at the end of the book we get a taste of life “After Nightlight”. It’s all from Connor’s point of view and we make discoveries about the other characters and Nightlight as he does. He discovers the Winners Wall which is the walls of the cabin the boys sleep in. The walls are covered in photographs of success stories, those that arrived gay and went home “normal/straight”. Its whilst looking at this wall that Connor discovers a photo of Ricky Hannigan, as well as Briggs, one of the staff members. There’s also a space where a photograph has been ripped away. The Winners Wall holds a lot of clues and secrets that Connor needs to uncover the truths about. As Briggs was on the boys cabin Winners Wall it made me wonder if female staff member, Ramona was on the Winners Wall in the girl’s cabin, but we didn’t get a description of their cabin or anything from their point of view/their voice really.

I found the book quite an addictive read and enjoyed pondering what had happened to Ricky that ended up with the FBI turning up at his home when he died to investigate. For them to be still asking questions about his accident that happened years before. Why was Connor told to treat him like a VIP? I loved the brain teaser type aspect to the book, and at times hated having to put it down. In fact, when I finally finished reading the book it was in the early hours of the morning as I had to know what had happened to Ricky and who was responsible for Ricky’s accident. I totally admit I thought I had solved the mystery a couple of times but wow I was still shocked when the truth was revealed. This book certainly made you think and puzzle over why these people at Nightlight thought how they treated the campers would somehow change their sexuality. The end of the book was really realistic and I am really glad it was. Connor talking to Ario about how different he felt now they had been apart and what he had been through with his new friends he met at Nightlight. I was glad things were kept super realistic with Connor’s mother too. It would have been so easy to have her denying any knowledge of what went on at the Island she had sent her son to. It would have been a typical happy ever after for her to apologise and her to welcome back her son immediately. I found the ending with Connor & Marco reuniting Ricky’s ashes with his own true love fairly emotional. This book certainly transports you to hell and back with Connor on his rollercoaster life. Though this book does deal with serious issues don’t be put off reading it as it also contains some great humorous quotes and scenes too.

My immediate thoughts upon finishing the book were that I had really enjoyed reading it. The book was really believable and I quickly became attached to the characters. By the end I even felt a little sympathy for staff member Briggs, though I couldn’t bring myself to feel anything positive for the Reverend or Ramona!

To sum up I think maybe some readers will think it a little far fetched and try to deny places and people like Nightlight existing but who knows if they are providing the type of teaching and treatment described within this book, they wouldn’t be openly advertising it would they! I loved the mystery and suspense elements within the book. It did make me think about anyone “coming out” in the present day and I reckon its still a big step for anyone. When will society just be accepting of everyone no matter who they are or what their sexuality is.