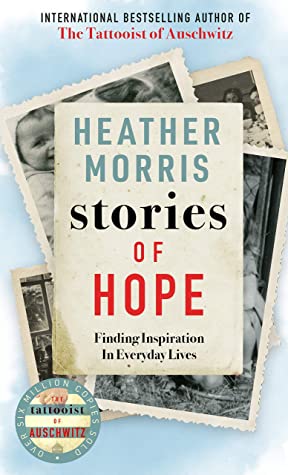 Title: The Stories Of Hope
Author: Heather Morris
Publisher: Manilla Press, Bonnier Books UK
Genre: Biographies & Memoir, Health Mind, Body, Non-Fiction
Release Date: 17th September 2020
BLURB from Goodreads
In Stories of Hope, Heather Morris takes us on an inspirational journey through some of the defining experiences of her life, including her profound friendship with Lale Sokolov, the tattooist at Auschwitz-Birkenau and the inspiration for her bestselling novel.Heather Morris will explore her extraordinary talents as a listener - a skill she employed when she first met Lale. It was this ability that led Lale to entrust Heather with his story, which she told as the novel The Tattooist of Auschwitz and its bestselling follow up, Cilka's Journey. Now she shares her inspiring writing journey, exploring how she learned to really listen to the stories people told her, some of which she has shared with millions of readers in her fiction.An essential companion to The Tattooist of Auschwitz and an inspiring manual for life, Stories of Hope will examine and explore Heather's extraordinary writing journey, in the form of a series of tales of the remarkable people she has met, the incredible stories they have shared with her, and the lessons they hold for us all.
Goodreads Link
PURCHASE LINKS
Amazon US (not yet available)
Amazon UK
REVIEW
Having read The Tattooist Of Auschwitz, and Cilka’s Journey both by Heather Morris I was really excited to read more. I had read somewhere on social media, or online that she was in the process of gathering information from three sisters about their Holocaust story and naturally presumed that was what this book was about.

I think the cover of this book is very fitting with the photographs featured on the cover and an aged looking paper bearing the title of the book. The cover also features the fact that Heather is the best-selling author of The Tattooist Of Auschwitz. The cover also has the by-line of “Finding Inspiration In Everyday Life” which is what Heather has done when she is sharing her own stories of her own life and when she talks about the different times she sat with her great grandfather and he told her about all the different objects he had collected over the years.

The only way I can really describe the book is that it’s kind of like two books in one really. There are sections that instruct you how to listen, both to people and your surroundings. I think to some it could come across a little like “telling granny how to suck eggs” in parts. I guess you could even say it is a tiny bit overly preachy in some of these sections too. Whilst I read these sections, I will be totally honest I didn’t enjoy them all and think some of them could have easily been left out of the book with little detriment to it.

The sections of the book I loved were the parts where she described how she came in to contact with Lale. Those first few meetings in his home, with the horrible coffee and the awkwardness that after one of his dogs accepted Heather enough to give her its ball, turned into an acceptance of her and a loving friendship. The outings that they went on to the cinema where Lale easily chose actress Natalie Portman to be the one to portray his beautiful wife Gita should a movie be made of their story. Though it took Lale much longer to choose Ryan Gosling to be the one to represent him. The amusing flirtations that Lale had with Heather daughter, to the event that Heather attended where women were at one side of the room and the men to the other. Lale introduced her to his friends and fellow Holocaust Survivors who immediately shared their own tales of Lale and Gita. They were also eager to tell Heather their own stories of families, and friends lost during the Holocaust, along with the different concentration camps they were kept in. Arguing and squabbling like children about who had the worst time in which concentration camp and the little stories of a small kindness that helped them live through to another day.

Heather reveals she also worked at a hospital, and I found one story she shared quite poignant as it was the loss of a child. Heather reveals how she would dress babies in outfits brought in by their parents, place toys, cards, and photographs with them. In this particular tale a bereaved father has two marbles that his ow father had given him as a child and he wanted to pass on one of the marbles to his son, but was finding the decision of which one to choose impossible and he asks Heather to choose. Her kindness is not forgotten and we learn her choice of marble colour turns out to have been quite apt later for the young bereaved couple.

Heather reveals how she heard about the three sisters, a last-minute, spur of the moment journey to meet one of them, enabled thanks to the understanding of her day job boss, whose story is going to be her next book. Heather mentions that without her family and friends understanding she wouldn’t have been able to write these books. She also reveals the toll listening and writing about these different Holocaust stories have taken on her. She explains that survivors deal with this awful period of the past differently. Some with have spoken to their families, where others will have never talked about the numbers tattooed on their arms. Luckily for the following generations some want to tell their stories, they want them to be remembered and continue to be passed on. It is a time in history and in their lives that in my opinion should never be forgotten. I think Heather is doing something invaluable for both the survivors of the holocaust who wish to tell their stories and for us, the readers of her books. Heather discloses the process she uses for the books. For example, with Lale she didn’t take notes, she would rush home and write down all she remembered as soon as she got home. Then as she does with all the stories, she is told she fact checks everything for the date, time and name of SS Officers and Survivors are correct. It was really engrossing reading how the research and writing of the Survivors are all different. As with Cilka’s Journey, Heather had to check, birth documents and family documents to back up what she was being told. Heather describes passing the house where Cilka used to live. There are things in this book that Heather describes that really make the hairs on your arms, and back of your neck stand up. Heather has also visited Auschwitz she describes being able to pin point the different barracks and areas in the camp that Lale described to her in such detail with ease whilst she was there.

I feel I need to add in a little more about this book, I had seen on social media people that had read it and were saying they really hadn’t enjoyed it. I came across these comments quite accidentally as I usually try my best to avoid what others think about a book when I know I do want to read it for myself. Some of the things said really had me second guessing whether I would enjoy the content of the book or not. For anyone unsure of reading it, having seen some negativity about the book, my advice would be to read the book for yourself. Even if you don’t like the bits suggesting questions to ask to have meaningful conversations, or the pointers on learning to really listen, there is so much more to the book. It tells you more about Heather the woman who was initially taught to be able to sit and listen well to others by her great grandfather. You get more of an idea of what Heathers life has been like as well as how writing these powerful, emotional, harrowing stories affects her and her own family too. Its certainly a book worth reading.

My immediate thoughts upon finishing the book were that it was an enjoyable enough read, though not what I had initially thought it would be. I loved the parts about Heather and her great grandfather, who taught her the value of listening. I also adored the recollections Heather shared about her time with Lale, the stories about the research she needed to do about Cilka. Here is also a very poignant story about an incident that occurred whilst Heather was working at a hospital that I found highly emotive. The book ends on the promise of the story of 3 sisters, which I can't wait to read.

To sum up, I really enjoyed certain parts of the book where as other parts I admit to finding a little irritating. Having said that for those who wish to learn how to listen to the world and people around them then those parts of the book will also be more interesting to them. Perhaps those sections are aimed at the younger generation that perhaps haven’t been around their elders to actually listen too. As an only child when my family visited my grandparents I was used to sitting, spending time with them and really listening to them, hearing the stories of their pasts. As Heather says in her book perhaps some would look at that as a duty of respect for your elders, though I loved spending time with them, reminiscing about how different their own childhood were. How my grandparents first met etc. I found it all fascinating. Perhaps they are the ones responsible for my fascination with people’s histories, memoirs and their own family stories. On the whole I would say, overall, I enjoyed the book quite a lot.