REVIEW - MY NAME IS SELMA BY SELMA VAN DE PERRE 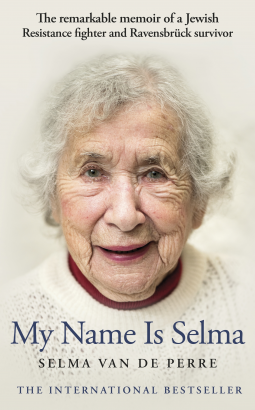 BLURB from Goodreads
Selma van de Perre was seventeen when World War Two began. Until then, being Jewish in the Netherlands had been of no consequence. But by 1941 this simple fact had become a matter of life or death. Several times, Selma avoided being rounded up by the Nazis. Then, in an act of defiance, she joined the Resistance movement, using the pseudonym Margareta van der Kuit. For two years 'Marga' risked it all. Using a fake ID, and passing as Aryan she travelled around the country delivering newsletters, sharing information, keeping up morale - doing, as she later explained, what 'had to be done'.

In July 1944 her luck ran out. She was transported to Ravensbrück women's concentration camp as a political prisoner. Unlike her parents and sister - who, she would later discover, died in other camps - she survived by using her alias, pretending to be someone else. It was only after the war ended that she was allowed to reclaim her identity and dared to say once again: My name is Selma.

Now, at ninety-eight, Selma remains a force of nature. Full of hope and courage, this is her story in her own words.

PURCHASE LINK
Amazon US (no link yet)
Amazon UK

REVIEW
I’ll be totally honest I feel drawn to books about the survivors of the Holocaust. I feel very strongly that their stories must be told and never ever forgotten, so when I saw this book and the picture of Selma, “the Ravensbrúck survivor” and “Jewish Resistance fighter” “today” at age 98 I felt compelled to read about her life as well as her many near deaths too.

I think the fact the cover image is Selma’s face makes it so powerful and almost irresistible, I know I would have to pick it up from a book store shelf to learn more about the remarkable woman who was a Jewish Resistance fighter who also managed to survive Ravensbruck too!

The book begins with Selma hiding hoping to evade capture. Sadly, she is found by an SS Guard and thrown into the last wagon. Selma doesn’t know any of the women she is in the wagon with. It turns out the women in the wagon are asocial, meaning they have done something the Germans do not like. It ends up being a bit of good luck for Selma as these women worked in the kitchen which means they have had access to food and have managed to smuggle more with them than those in the other wagons. When the women bicker about how to share or ration their food it is Selma that speaks up and ends up being chosen to take care of and distribute the food, in an attempt to make it last for their journey. It’s whilst on the long train journey that Selma writes a not to her best friend Gretchen, she tells her friend she is in a cattle wagon on her way to Ravensbruck or Sachsenhausen. She throws the note through a gap in the slats of the wagon hoping it reaches her friend but not knowing if it ever will.

The book then reverts to the past and gives some background about Selma and her parents and siblings. Selma’s father was an actor so they moved around a lot for his work. His work was also sporadic so Selma was used to life changing rapidly. When he was in work they could live, eat and dress well. However. when work was scarce they wore hand me down clothes, made do, and ate what their mother could get her hands on to cook for them. Maybe it is this type of life of having to adapt to her surroundings that helped Selma exist and survive Ravensbrusck. Though Selma and her family were Jewish, they weren’t regular attenders at their church. The most religious thing about Selma and possibly the only clue to her Jewish heritage was the fact she wore a Star of David necklace. Some would say lucky for Selma, she didn’t have the typical Jewish hair and looks so easily passed as a German.

Several times in the book, Selma refers to herself as lucky. As she works distributing messages and leaflets within the Jewish Resistance, she comes really close to being captured. Selma’s part of the resistance ends up being caught, yet once again she is not identified as Jewish and is put with political prisoners. Selma has many brushes with death, even when liberated from Ravensbruck, she narrowly misses being in one of the vehicles that is blown up when mistaken for a vehicle full of fleeing German Army personnel.

I don’t want to reveal everything about Selma’s life as you need to read it all in the words and order Selma chooses to divulge it in the book. It is her story to tell. You may think that when Selma is liberated from Ravensbruck her suffering is over, but it is far from finished. Selma may have been freed from Ravensbruck but she has no where to live, no money, just nothing.

Selma naturally revisits her old home and discovers the odd neighbour here and there that is still in the area. Selma is desperate to know what happened to her dear father and her mother and her younger sister Clara. Unfortunately, the reality is devastating. Selma still manages to pick herself up and get on with her life. Her two brothers fought and are both now in England.

This book tells how the war and Nazi regime progressed. First what could be considered small things were taken away from Jewish families, like not being allowed into the same cinema as others, not being allowed out. Then losing their businesses and property. All perhaps things the Jewish people could survive or cope with alone but the way things escalated because of one mans idea’s of perfection, that same man’s feelings of hate towards a race of people would be unbelievable, and you would think it a fictional story if you didn’t know that it is fact and the people in these books are real, their losses real, their suffering real. The more I read about the era, the more I learn, then look at the world around us and shockingly see similarities, the beginnings of possibilities of all these atrocities happening again.

I found it interesting to learn that the Red Cross visited different camps run by the Nazis, obviously only shown certain areas and healthy prisoners. Red Cross parcels were regularly sent to these concentration camps. However, in reality it was extremely rare for any of the parcel contents to ever make it to those in need. The guards were the ones that benefited from the Red Cross parcels not the prisoners existing in the horrendous conditions hidden from the visiting Red Cross. How could the truth be so easily hidden?

I also read the sad story of the Resistance member that revealed information in the hope it would save Selma and his other colleagues. Of course, the Nazis did not keep to their end of the deal, lives were lost and the Resistance member survived the war and ended up being labelled a collaborator, despite having suffered greatly himself.

Though I have read quite a few of these survivor stories there is always more to learn. I didn’t know Ravensbruck gave their prisoners numbers but did not tattoo them onto them as other camps did. I think I have read a lot about Auschwitz and not so much about the women only camp of Ravensbruck. I had also read about “The White Rose” but perhaps not so much about the Jewish Resistance. I know it is a very dark period of history but these stories must be told, these people must be remembered, then at least they did not die in vain.

Selma truly is an inspirational, remarkable woman, but through her words in the book she strikes me as someone who would shrug off an accolade or praise for what she did. Selma tells her story in a matter of fact way, how it all happened. Selma made and lost friends along the way. After the war she did her best to trace family and friends tracing what happened to them, visiting them if they too survived and mourning the ones that didn’t. I am honestly thankful to Selma for telling her story, so that younger generations can learn the truth and pass on her story into the future too. Selma doesn’t make out she is/was anything special, she just tells her story and that of those around her throughout her journey. As she says in the little introduction of the book she has shared her story as a tribute to all those who suffered and died. The ironic thing is all through her journey through the resistance and in Ravensbruck she was not identified as Jewish. She was arrested and held as a political prisoner, under an assumed name and false identity papers. Did being a political prisoner as opposed to being a Jewish prisoner save her life? Who knows, maybe it did. I imagine anytime those identity papers were called for, examined were extremely anxious times for Selma. She must have been continually on edge, and she states in the book she trusted no one with her true name and heritage. It wasn’t until everything was over that Selma reclaimed her real birth name in the hope it may help her trace her family and friends.

My immediate thoughts upon finishing this book were that it was an amazing account of a brave, courageous woman who survived the atrocities around her by living one day at a time. Trying her best to hold on to a shred of hope. Despite the odds she survives Ravensbruck. Her life story and those like her should be told, and retold, handed down the generations so they are never forgotten or repeated.

To sum up this book takes you through a whole range of emotions. From dread and being on the edge of your seat as Selma describe how she evades being almost caught on many occasions. There’s horror at the conditions she has to live in, anguish when she is so ill, it seems she will die in the camp, to elation when Ravensbruck is liberated, relief she isn’t in the wagon that is bombed yet at the same time despair for those poor women to have survived the war and a concentration camp to be bombed and killed during their liberation by those on their own side of the war. I say this about lots of the books I read about those that survived the Holocaust but Selma’s story is one of courage, bravery and yes as Selma herself says luck and it must be read, and talked about. It’s a message, memories of an horrendous time that should never be forgotten.