BOOK PROMOTION, AUTHOR INTERVIEW & THIS OR THAT POST - HOPEBREAKER BY DEAN F. WILSON 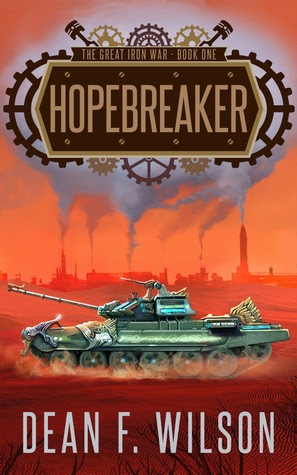 BLURB from Goodreads
In the world of Altadas, there are no more human births. The Regime is replacing the unborn with demons, while the Resistance is trying to destroy a drug called Hope that the demons need to survive.Between these two warring factions lies Jacob, a man who profits from smuggling contraceptive amulets into the city of Blackout. He cares little about the Great Iron War, but a chance capture, and an even more accidental rescue, embroils him in a plot to starve the Regime from power.When Hope is an enemy, Jacob finds it harder than he thought to remain indifferent. When the Resistance opts to field its experimental landship, the Hopebreaker, the world may find that one victory does not win a war.

What is your name, where were you born and where do you live now?
Dean, Dublin, and … Dublin. While the Irish have been known for spreading around the world, I'm not one of them, and I'm happy to live here for the rest of my life.

What is the name of your latest book, and if you had to summarise it in less than 20 words what would you say?
Hopebreaker: A contraceptive amulet smuggler gets caught up in a plot to starve the Regime by destroying a Hope factory.

Do you have plans for a new book? Is this book part of a series?
I'm currently hard at work on Lifemaker, the second book in The Great Iron War series. It is due for release at the end of March, 2015, and I'm aiming for a pretty aggressive release schedule for the rest of the books (six in the main series, plus one prequel).

What genre would you place your books into?
Hopebreaker and its sequels are all steampunk novels, but steampunk itself is kind of a mix of genres. It has fantasy and sci-fi elements, but the story is also dystopian, and it's set in another world, which borders on the world of my epic fantasy series The Children of Telm. In this way, everything I write has some connection. The Memory Magus series of short stories provide a direct link between those two worlds.

How long have you been writing?, and who or what inspired you to write?
Since I was at least 11 years old (my family insist it was earlier). I wrote my first novel then, entitled The Power Source. It was not particularly good, but it was great practice. I also recall receiving a report card from school when I was even younger, which noted my ability to form unusual sentences, so I think my interest in words and language has always been there.

How do you come up with the Title and Cover Designs for your book/books?Who designed the Cover of your books?
For this series, the title is the name of the primary steampunk vehicle, but also a one-word summary of the plot. The covers show the vehicle in the foreground, with smoke rising in the background, which forms a cloud in which the title sits. This same pattern applies to all six books in the series, and the stand-alone prequel. I usually decide upon a pattern I like, and convey this to the artist. In this case it was Duy Phan, who did an amazing job on the covers.

Do you choose a title first, or write the book then choose the title?
It depends on the book. It was only when I had written most of Hopebreaker that I came up with the title for it, but now I have the titles for all of the rest of the series, which follow a similar pattern.

How do you come up with characters names and place names in your books?
Most of the time it's just random sounds that come into my head. Other times I choose words from foreign languages, usually with a meaning relevant to the character or place.

Do you basic plot/plan for your book, before you actually begin writing it out? Or do you let the writing flow and see where it takes the story?
I like to find the balance between plotting things out and just seeing how it goes. The main elements of the story are usually planned, but the characters are then given free rein within those boundaries, and they act and react according to their nature.

Do you think ebooks will ever totally replace printed books?
I think there are pros and cons to both, and I think both will be around for some time to come. While ebook growth is phenomenal, many people still enjoy their physical library of books.

What do you think about book trailers?
I like them if they're done well. Of course, most authors don't have the budget for that and have to settle for something very basic. It's another medium for letting people know a book exists.

Do you or would you ever use a pen name?


I plan to write spy thrillers in the future, and those will be under a pen name.

Read a book once/Re read books more than once?
Re-read