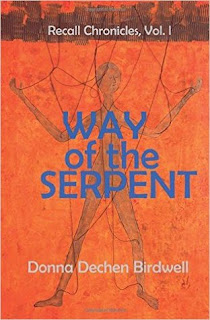 BLURB supplied by "The Author's Assistant"
It’s 2125. Aging is a thing of the past but personal memories and desires are now under corporate management. Jenda Swain is a youthful 111 years old, content with her professional career, when a disturbing encounter with an old woman forces her to question her own identity, to begin searching for the woman she once was and might yet become. Her journey takes her into the arms of an activist artist who has a quest of his own; answers come together as their world falls apart.

Way Of The Serpent
The café was down a couple of side streets, in an area of Dallas Jenda never went to, but she thought she might have been there once before. She couldn't remember. Without looking at the menu, she ordered a grilled cheese sandwich with fried potatoes and sweet tea. It was plain food. She was halfway through her meal, savoring the anonymity afforded by this out-of-the-way eatery as much as the greasy fare, when she noticed the woman who had turned on her stool at the café’s counter to stare.
The woman was old. That in itself was disturbing. Nobody got old anymore, not since Chulel – the drug that prevented aging – had come on the market a hundred years ago. Jenda, at 111, was as fresh and vigorous as she had been in 2035 when, at the age of 22, she had received her first annual Chulel treatment. Jenda’s grandmother was 165, but appeared no older than she had been when she began taking Chulel in her mid-sixties. What was this old woman doing in Jenda’s world?
Jenda turned away, but she could still feel the woman’s dark eyes boring into her, probing. Jenda couldn’t help herself; she looked again. When the woman saw her looking, she smiled.
“Zujo!” Jenda swore, quickly returning her attention to her unfinished sandwich. It was too late. Taking the look as an invitation, the woman dropped down from her counter stool and shuffled over to Jenda's table.
“You're Jenda Swain,” she said, cocking her head to one side and narrowing her eyes. “God, you look the same as you did in high school.”
“Excuse me?” Jenda sat up straighter and used her best business voice.
“Of course you don't remember,” the woman said, dragging out the chair across from Jenda and sitting down heavily. “Nobody remembers much of anything anymore.” She shrugged and looked down at her hands. Jenda looked, too. The woman's hands were wrinkled, misshapen, and covered in brown and red splotches. “I remember you, though,” she continued, looking up into Jenda’s face. “My god, you were a firebrand back then. I idolized you and your boyfriend, you know. Such temerity! The things you did...” The woman refused to turn away. “Do you still paint? You always had your mom’s gift for art.”
“I think you must have made some mistake,” Jenda said quietly, fighting to modulate her voice against the tightening in her throat. “You may know my name, but you clearly don't know me. Nothing you are saying makes any sense at all.” Jenda felt her cheeks warm as she flashed on an image of herself with an easel and paintbrush. Her last bite of sandwich seemed to have lodged somewhere near the base of her esophagus. “Now, would you please go on your way? Leave me alone.” Jenda blinked, shuttering herself away from this intrusive presence.
The woman's face clouded and she leaned forward, looking Jenda squarely in the eye. “You need to ask more questions.” She spoke the words clearly and forcefully. Then she pushed her chair away from the table with a loud scraping noise. As she leaned over to pick up the leather bag she had dropped under the chair, the pendant around her neck clanked on the tabletop. It was an old fashioned timepiece, the kind with a round face with numbers and moving hands. Jenda reflexively reached up to grasp her own necklace, a cluster of plexiform flowers in the latest style from her favorite recyclables boutique. The woman took in a deep breath, as if rising from the chair had taxed her strength. She looked at Jenda again. “You’re the one who doesn’t know who Jenda Swain is.” Her voice was gentle, maybe sad. Then she turned and walked out the front door.
Jenda’s impulse to run after the woman and ask her name was unexpected. Holding it in check, she sat rigidly, staring at her cold, greasy food. She swallowed hard, trying to dislodge that last bite of sandwich. Her hands trembled. She quickly finished her dilute, not-so-sweet tea. Looking up and down the street as she exited, she saw no sign of the woman..... 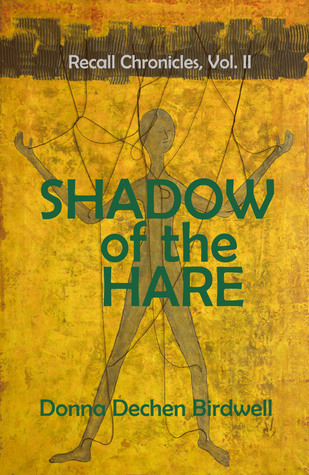 BLURB supplied by "The Author's Assistant"
Malia is a stubbornly dissident author and bibliophile in a world where books have ceased to matter and barely exist. She remembers how things changed through the 21st century, but after fifty years of self-imposed exile, she returns to a world far more terrifying than the one she fled. In Dallas, Nigeria, and India she doggedly pursues the truth her heart demands.

Shadow Of The Hare
The café was down a couple of side streets, in an area of Dallas I hadn’t visited for decades. As soon as I sat down I saw her and I couldn’t help but stare. It had to be Jenda. When I saw her look­ing at me, I slid down off the barstool and walked over to her table.
“You’re Jenda Swain,” I said, smiling, hoping she’d say, And you’re Malia Poole! But she didn’t. I hadn’t seen her in almost ninety years and it was clear she’d been taking the age prophylaxis, the miracle drug called Chulel that kept everyone young in our 22nd-century world. Almost everyone. She was giving me that look—that what-the-zujo-is-an-old-woman-like-you-doing-in-my-world look—followed by the averted eyes.
“Of course you don’t remember,” I said. I pulled out a chair and sat across from her. “Nobody remembers much of any­thing anymore.” I looked down at my wrinkled, age-splotched hands and then up into her smooth, fresh face. It was hard to believe I was two years younger than Jenda. “I idolized you and your boyfriend, you know. Such temerity! The things you did…” I was hoping to elicit some of those things from her or perhaps startle myself into recalling what some of them were.
She said nothing, glancing around the café as if to offer an apology for my presence. For my existence.
A memory suddenly came to me: a full-color portrait of Jenda as she was in high school. Not this business-suited twit, but a passionate firebrand of a girl. An artist?
“Do you still paint?” I wasn’t giving up. “You always had your mom’s gift for art.”
Jenda was clearly embarrassed and growing quietly angry. But I thought I detected the old passion under the surface. Come on Jenda—show me some of the old spunk.
She avoided my gaze. “I think you must have made some mistake.” Her tone was flat, dismissive. “You may know my name, but you clearly don’t know me.”


Her face flushed slightly and I thought I saw a glimmer of recognition in her eyes. Leaning forward, I looked into those eyes. “You need to ask more questions,” I said. I pushed my chair back and rose to go; then I looked down at her one last time. “You’re the one who doesn’t know who Jenda Swain is.” Donna Dechen Birdwell is an anthropologist whose curiosity about what makes human beings tick propelled her to travel widely, listening to the stories of many different cultures and eventually coming up with a few of her own. Her debut novel is WAY OF THE SERPENT. High on the list of countries she knows and loves are Belize, Guatemala, Mexico, Costa Rica, Cuba, England, Ireland, Spain, Nepal, India, and Tibet. Her work is deeply influenced by the stories and imagery of these places. Donna is an artist, poet, and photographer as well as a novelist. She holds a Ph.D. in anthropology from Southern Methodist University and previously taught at Lamar University in Beaumont, Texas. She now writes, paints, and photographs in Austin.