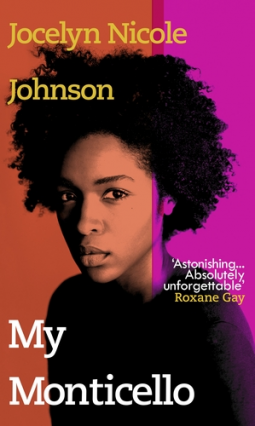 BLURB from Goodreads
What we saw in those moments riveted us, and then it set us free

In a time of rolling blackouts and terrible storms battering America, the neighbourhood of 1st Street, Charlottesville is attacked by violent white supremacists.

Families, friends and strangers flee for their lives in an abandoned bus, taking refuge in Monticello, Thomas Jefferson's historic plantation home in the hills above town.

Over nineteen heart-stopping days the group find ways to care for and sustain one another as the world burns beneath them.

REVIEW
I think the cover of this book is quite striking and certainly attracts your eye to it!
I would say the female featured on the cover is meant to be the main character in the book, Da’Naisha Love. The story is told from her point of view and you can really visualise what she sees as it is describes in the book quite easily.

There have been awful storms that have felled historic trees and flooded important buildings. The power just couldn’t cope and when the power failed and the mobile phone network went down, jets and helicopters fell from the sky. If all that wasn’t enough to cope with, the racism and racial attacks have rapidly increased. Da’Naisha had been living with her boyfriend Knox, but she fled to check up on her beloved grandmother MaViolet, who lived in a fairly poor part of the area. MaViolet had brought Da’Naisha up in that same neighbourhood were those that lived there didn’t have much but they got on together and helped each other where and when they could. After checking on the woman that raised her, Da’Naisha attempted to get back on campus but when she came across barricades and students guarding them that would not let her back in, they verbally and physically abused her shouting and spitting at her. These same students she had attended classes with until now. Da’Naisha returns to MaViolets and that’s where she is when the real unrest begins with men arriving at dusk singing the Star spangled banner at the top of their voices brandishing fire torches and guns. When Da’Naisha hears the familiar voice of Devin shouting go, go! Da’Naisha helps MaViolet and a few others onto “the Jaunt” a small minibus that they use to take the older folk on trips/jaunts. Devin and his twin cousins Elijah and Ezra keep the men at bay returning fire until everyone is on the jaunt and ready to get out of there. Da’Naisha drives, she has no idea where to go, just to get away from the angry mob! Eventually they end up at the Piedmont mountains, at Monticello. The very house/plantation that Thomas Jefferson designed himself. The irony is not lost on MaViolet or on Da’Naisha as they are descendants of Sally Hemmings a slave and mistress to Thomas Jefferson himself!! Thankfully one of the three guards still at their posts recognises Da’Naisha as she had worked there over the summer.

I don’t want to give anymore away really but the story tells how the group of people strive to keep together and survive and protect themselves. The book deals with a lot, racism, both those against Da’Naisha and the fleeing group, and those who show racism and prejudice against Knox as he is not like them. He could easily pass as white as a few of the others could but why should they have to hide their heritage! The book also talks about slavery, and Da’Naisha’s family connections to Thomas Jefferson, though neither she nor MaViolet make a big deal about it. All those taking refuge at Monticello treat the place with respect and they do well, just when you relax as they have made their own community and becoming cleverly self sufficient, then those who wish to wreck everything rear their ugly heads and things go rapidly wrong.

I also really enjoyed the different characters within the book. I loved the respectfulness of the younger generation had for MaViolet. How when she is really ill, they all visit her and try to help in any way they can. I have to admit to filling up with tears when I read certain parts of the book concerning MaViolet. MaViolet is a strong, proud woman and is loved by a lot of the characters in the book. If she has something to sy she says it, she doesn’t sugarcoat it, she tells it like it is.

The issues that Da’Naisha is going through really pull you in, I really felt her dilemma between the two males in her life. Devin, the boy from the neighbourhood she has grown up with and had a “on, of, briefly back on which seriously complicates things now with the other man in her life Knox. They both want to protect her, both care, probably even truly love her, Devin being the “bad boy” and Knox the good, safer option. Who will she choose and will the one she chooses still want to be with her when she reveals the awkward but probably more prevalent than anyone ever reveals situation, she has found herself in?

My immediate thoughts upon finishing the book were it certainly left me wanting more, and I think I would check out other titles written by this author in the future. The book gave me the same sort of feeling as I had when I watched the movie “The Hate You Give” (I know it was in book format first and written by Angie Thomas). It was a short book that covered a lot of large concerns that are still raging issues

Summing up I found this book an interesting, rather quick read. It left me wanting to know more about all the individual characters and their lives, the choices they had made and would go on to make. I wanted to know more about Devin & his cousins lives before they went to Monticello. There were other interesting family groups and other single characters that I felt had more to tell and give the reader.