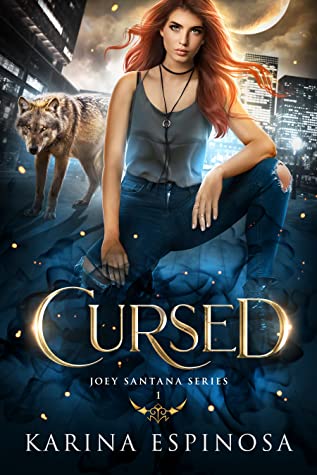 BLURB from Goodreads
The headlines read: Human Bitten by Werewolf.

Story of my life.

The names Joey Santana and my twenty-fifth birthday didn’t necessarily go as planned. In a world where supernaturals and humans live together, I was attacked and saved by none other than the Alpha of the Los Angeles Pack. But with survival came a price. And I wasn’t sure if I was ready to pay it.

Fast forward and I’m waking up the next morning in some stranger’s house with a half-naked man coming out of a bathroom. Awkward. And it so happens to be the Alpha’s son, Reed Stone. Right off the bat, he knows I’m trouble with a capital T since there haven’t been any humans turned into supes since supernaturals were outed five years ago. But if he thinks I’m going to sit back and take whatever he’s got coming, he’s painfully mistaken. I might have been human, but I now have canines, and I bite.

We’re forced to work together to wade through the supernatural politics and threats that await me. Our personalities clash in a battle of wills for dominance as the two of us grow closer together to solve the biggest mystery of all—why the hell would my father want to kill me?

REVIEW
When I heard that this author was bringing out a new series and after reading some of her other titles, I was eager to read this new one. I love the cover, the way it depicts the main character in the book, Joey Santana. It’s good to have an image to go with the person you are reading about. Though having said that upon reading the descriptions about the different characters in the book, I don’t have any issue visualising what they all look like. The image of Joey on the front cover certainly fits my idea of what she would look like too. The genres that this book would fit into are urban fiction, paranormal, fantasy but there are also elements of mystery, thriller and its certainly action-packed, with lots of human vs supernatural politics as well as all the inner politics within the supernatural’s and then the different laws, policies and customs within each individual race. So, there is a lot to learn about the world this book and series is set in.

In the “world” in this book the humans know of the existence of the different supernatural races. In fact, they have known for about five years, so you would think all the different races would have integrated somewhat by now but sadly that is not the case. The largest split is Humans vs Supernatural’s each living in their own areas of Los Angeles. Even the humans seem split with some taking a live and let live attitude, others wanting nothing at all to do with the supernatural races. Then the more extreme humans who join organisations like Human’s United led by Darius Blackburn, a group of people that want to restore order in the favour of the human race again and purify the land they all live on. They consider the supernatural’s to be abominations and want to get rid of them all.

It seems that life has kind of been plodding along with the odd flare up between supernaturals, and individual races and humans but nothing major. The latest disturbance to peace is that Senate Representative Marissa Beauchamp is trying to push through a law which would mean all supernaturals would have to be registered. Within this registration would be the name, address and also the supernatural ability listed and kept on record. The humans seem to want to control the supernatural community, perhaps using this law to treat them as second class, citizens or even pets with little to no rights! The talk of this law has been going too and fro for quite some time and it seems to have reached a stalemate, in that if put to a vote the decision could go either way.

Joey Santana, works at Sloane’s Restaurant waiting on tables. Sloane’s Restaurant is frequented by both humans and all the different supernatural’s. In fact Joey gets along with all types of customer, whatever race they are. Joey has made friends over the years with some of the supernaturals and talks to them and serves them just as she does anyone else in the restaurant. Joey is at work tonight despite it being her birthday and after some gentle harassment and persuading has agreed to meet up with her best friend, Kit, who she has known since they were at school together. Joey hasn’t had a great upbringing, never really feeling any love from her parents. In Joeys mind Kit is her family and the only one in the world that loves her, which is why she gets herself so easily talked into meeting him after work despite the fact she will no doubt be super tired. Unfortunately, later that evening Joey is attacked and left in an alley to die. Mr Stone, the Alpha of the Los pack makes a split-second decision and bite’s Joey to save her life. This does save Joey’s life but it also changes it beyond all recognition and it certainly adds fuel to the fire for the Humans United members who want all supernaturals registered. They manage to twist a desperate act of kindness to save a young girls life to the first act of the supernaturals turning humans to form an army, to then wage a war and take over from the humans!! It also reignites the embers of discontent within Elliott Stone’s pack. There are some that do not like Elliott and this action just adds another thing to dislike him for. Elliott has to plead his case, and prove that his perhaps in hindsight rash decision was not premeditated to the Guild. Joey also attends the meetings to explain what happened and why.

There are lots of characters to get to know in this book and I hope we will learn even more about them as series goes on. Of course, I love Joey, a fantastic kick-butt female character, the way she continues to push the boundaries that Elliott Stone asks her to keep to whilst she is in transition. I think Joey ends up seeing Elliott and his wife Lillian as surrogate parents. Then there’s Reed Stone, son of Elliott and Lillian, who finds some of the situations Joey gets herself into amusing where as other times he finds her exasperating. I can see a love triangle forming in this book already or will it be love pentagram as quite a few of male characters in this book seem to have certain feelings for Joey and become rather flirty with her on different occasions within the book. As for female friends, Joey doesn’t seem to have ever had them in her previous “human life,” she didn’t need one, Kit was the only human friend she ever needed or wanted. However, in her new supernatural life she finds a firm friend in the Crows Nest. After going out “to meet new friends” following the instructions from Elliott, she decides to ditch the increasingly irritating Reed, who Elliott tasked with introducing her to people. Joey heads straight to the bar and watches the barmaid interacting with the customers and mixing up different strange looking drinks. It’s not long until Joey and Eugenie are firm friends. The fact that Eugenie is Reed’s ex-girlfriend and their newly formed friendship irritates him is a bonus.

The characters I enjoyed despite them being the bad, troublemaker ones were Darius Blackthorn leader of Humans United and Norman Wright the human representative who sits on the Guild board. I started off strongly disliking Joey’s parents, particularly her father but further into the book, there is a scene that made me feel a little sorry for him. Other characters that I think are ones to watch are the Seelie Queen, and Levi a werewolf who is within Reeds friends circle, and maybe even Ava who is also a werewolf who is besotted with Reed. I already adore and feel attached to Joey and it’s clear to see, even though Joey doesn’t see it right now, that both Kit and Reed have feelings for her and quite possibly love her.

The action begins within the first few pages and doesn’t really stop until the very last page. Then you are left with so many questions and ideas about what may or may not happen next.
I really, truly enjoyed this book a lot, it didn’t take long for me to become totally engrossed. I loved all the sections where Joey is learning about her new life. Despite everything being new and strange, Joey is determined to make the best of her life. Though she is throwing herself into this new way of life she wants to keep her human best friend Kit in her life, despite being warned he may snub her, now she is so longer human. Joey insists Kit will be different, her being a werewolf won’t change their friendship at all. Unfortunately, Kit quickly becomes a target for the people who want to get their hands on Joey. Can Joey and Kit continue to be friends, or would it be safer for Joey to cut all human ties, and immerse herself in her new life. There are so many different aspects of this book, so many different plot lines to follow, it honestly is an amazing read!

My immediate thoughts upon finishing reading this book were, Wow! What a fantastic start to another amazing series by Karina Espinosa.

To sum up I can’t wait to read more!