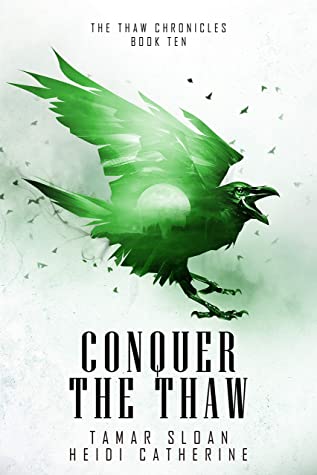 BLURB from Goodreads
Only the strongest will lead

The deadly Tournaments are over. A new leader of the Outlands has been chosen.

To hold onto power and seize the riches that lie in Askala, the new Commander must earn respect and build an army. But how can control be taken when everything has fallen apart?

In a harsh world of lies, secrets and brutal betrayals, challenges will be made and rules will be broken. The Commander will need to discover if the real war is against the dying planet or if it’s against the people themselves.

A new war has begun. Askala is the prize. Only the strongest will lead.

REVIEW
Once again, I love the cover as it fits so well with the rest of the series, and birds do feature in rather important roles throughout the books. I bet these books look absolutely amazing on a bookshelf together. The different colours used on the covers making them stand out and have individual looks to each book, yet the use of the birds being cohesive and linking the whole series of books.

It really felt like I easily slipped back into this harsh world and quickly remembered the different groups/tribes with their own individual customs, ways of life and different living conditions & environments. Each set of twins have been separated thinking the other person that is literally their other half has tragically died.

Lexis and Gray are together wandering the outlands in search of a place to settle either just the two of them or perhaps with a friendly group of likeminded people. Sadly, things do not go to plan, in fact they decline rapidly and just when it looks like death is near for Gray, Lexis has no option but to strike a deal with the Never people without thinking it through nor settling on terms of repayment for their help. Lexis and Gray are then divided, with Lexis being held in the women’s part of the Never camp and Gray recovering from the awful partial price he has paid for the Never’s help. You could say the Never people have certainly “hobbled” Gray, making sure he is in no fit state to attempt escape without paying off his debt by working for the /never people. The only reason Lexis hasn’t had the same damage done to her as she managed to fight off those doing the deed and made it quite clear she wouldn’t be leaving without Gray anyway. It’s whilst working off their debt that Lexis meets a young girl whom she befriends and discovers is called Shale. Lexis is horrified to discover Shale has had the same maiming done to her as Gray has. In fact, as the book goes on it is Shale who helps Gray discover how to move about, learn to work and survive despite his injury. In the Never camp if you do not work and do your share you forfeit your ration of food and water.

Raze and Winter, or rather Grace as she is now calling herself are also fleeing Cy where the Tournaments were held. I loved the explanations behind the name change, although it did confuse me a little until I got used to it. Winter herself wants to honour her dead sister, whom she looked up to, and still dearly misses. Another perhaps more poetic description of the name change is that Winter is a season, one that no longer exists. It is also put across that Winter was a naïve, inexperienced young girl who arrived at the Tournaments. People thought Winter & Gray would leave the Tournaments when given the opportunity but they refused. Then the other contestants thought Winter & Gray would be amongst the first to die. All the other contestants in the Tournaments had more fighting experience, they were much more prepared for what was to come and what they would have to do to survive and have a chance of winning the Tournaments. Despite these odds Grace & Gray adapted as the Tournaments were under way and Winter/Grace changed into a strong leader. A leader who wants to unite the Outlands and work together rather than rule with violence as Evrest wants to do.

Evrest is determined that he alone is the true leader, the new Commander Of The Outlands. He will be the one to lead an army on Askala and secure the bounty that is there for himself. Rather than physically fight him at the moment, which Grace knows would most probably end in the certain death of an already badly injured Raze and probably her own too as she is in no shape after the Tournaments despite winning to endure another fight right now. Grace needs the support of the other races/tribes, she needs them to follow her as well as needing their help to get herself and Raze away from a still bloodthirsty Evrest and his loyal followers. Evrest doesn’t even care about his own children, they are merely people in his way that he needs to dispose of. Grace, the others along with Raze flee from the immediate area when threatened by Evrest and his men. Then Grace forms a kind of council, consisting of a representative from each race of people. This council that is formed will be the ones voting on the important decisions ahead. There’s Feather, from the People of Never who Grace coerces and cajoles into carrying Raze who is so badly injured is unable to walk. In return, Grace promises Feather that he will be her second in command, much to the People of Rust candidate’s irritation as he had earmarked that job for himself. Scoria, the only other female representative other than the new commander herself stands for the People of Cragg, Grace represents the People Of Fairbanks or “the Ghosts” as they were once known. Finally, the last member is Raze who will represent the People of Cy. The other representatives aren’t entirely happy with that, more or less saying that Raze is injured and will likely die, and that they would be better to just leave him behind.

I truly admire the writing styles of Tamar & Heidi together it really is totally seamless and I don’t honestly think you could pick out who wrote what section/character without them telling you. I enjoy the descriptions within the book, they help you visualise what is being described. One particular description that stood out for me was the way Grace describe curtains and describes what they were used for to Raze. Raze cannot seem to comprehend that people were once bothered about having curtains a certain colour. Grace explains people cared about such things as they did not have real things to care about such as survival.

I liked a lot of the characters in this part of the series. Of course, I continued to care and like the older characters of Winter, now called Grace and Raze. Grace’s determination to protect Raze when he is injured and would surely die if left alone. It’s even clearer in this book that they have deeper feelings for each other. Just like the other half of their twins, Gray and Lexis who also have strong feelings that are growing ever deeper for each other.

One newly introduced character in this book is Shale, who was stolen from her own people, the people of Cragg, she has suffered the same maiming at the hands of the Never as Gray has but being younger has adapted. When she is put to work with Lexis, she discovers that there are people who still care, that there’s still kindness in the world. Shale helps them and when they make a break for freedom, they take her with them.

I thoroughly enjoyed getting to know the bad guys in this book, who were the people of the Never and what they do to poor Lexis and Gray. They think it is totally acceptable to maim someone so they cannot run away. We discover more about Brik, from Fairbanks like Gray & Winter/Grace, and my instincts about him in the earlier books are proven to be right.
There is even another “race”/group of people introduced to us in this book, they are the
people of Treasure Island, who end up giving us an inkling as to what the spin off series that Tamar & Heidi are doing may contain. My thoughts and feelings on the people of Treasure Island were mixed and I am still a bit undecided, on the surface they seem extremely welcoming, but it soon became apparent that they have a hidden agenda! There is one section in the book where they almost re-discover each other, that their twins are in fact alive. They quite literally pass each other whilst struggling with the acidic ocean and unpredictable weather. There are also lots of revelations in this book, turning up a few surprises as to different characters that are in fact half siblings, sharing the same awful father.

The only negatives were Winter changing her name to Grace, though when explained it did make sense, it just took a little getting used to. I also wasn’t keen on the word “factions” being used, to me the term is so heavily associated with Divergent, rather like the word “districts” would be quickly linked to the Hunger Games. I would have preferred calling the “factions” tribes to avoid any association with other books. I honestly think this series stands strong alongside books such as Divergent and The Hunger Games. If The Thaw Chronicles were ever made into movies or a TV show I would most definitely be glued to it. Though in my opinion whoever made it a movie or TV show would have to involve Tamar & Heidi to keep it true to their vision and the books.

My immediate thoughts upon finishing reading the books were “Oh wow! What a brilliant ending to an amazing, adventurous, action-packed book. These characters really have been on an arduous and dangerous journey that I have thoroughly enjoyed reading about.

Summing up I have loved all of The Thaw Chronicles, I can’t quite believe it’s the end! Though, is it? I mean I am so looking forward to the other spin off and discovering more about the man who started everything off. The man who owned the Oasis and those that decided to apply to go along with him on his ship Oasis.