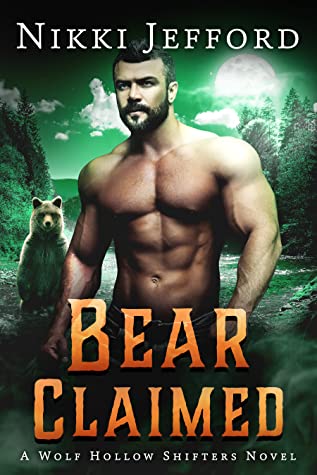 BLURB from Goodreads
Love made her crazy. A reckless act of passion sealed her fate.

There is only so much rejection a woman can take. Taryn has lost patience with her brother's best friend. He said he would claim her. Then grief made him ask for more time. She gave him time. And more time.

When the cur falls for another female in the pack, Taryn isn't heartbroken… She is furious! Livid enough to seek out the rugged bear shifter who has been skulking around Wolf Hollow's borders.

He was duped once before. Brutus isn't letting the next female get away so easily.

The wizards stole his ancestors' mountain community then tricked him out of a mate. He and his brothers are going to make the Wolf Hollow shifters sorry for the role they played.

When a spirited she-wolf throws herself, literally, into his arms, Brutus is forced to choose between the feisty beauty he wishes to claim and his duty to avenge his family against the wizards and wolves.

Can a wolf and a bear become true mates?

REVIEW
I always look forward to releases of this series as I have really enjoyed the whole series so far. It’s kind of sad to think there is only one more book after this one.

I love how the cover fits in with the rest of the series with the buff bodies and different colours. It’s back to green with this one, so it made me think of the first book in the series, Wolf Hollow.

We do already know a little about the central characters of this book, Taryn is giving Chase “space” to get over the loss of his sister, but she is becoming impatient and decides to confront him when she quite literally finds him in a passionate clinch with someone else.
It’s whilst she is still fuming from his betrayal that she first sets eyes on Brutus.

The history with Brutus certainly doesn’t cast him in a favourable light, but then neither do his actions when he see’s a naked Taryn in the river Sakhir. Everything seems to be going wrong for Taryn, first the male she wanted to claim has gone off with someone else. Then her brother leaves to travel with Hailey and Rafael and their small recently formed pack when Taryn feels she needs his support most. After being coerced into dancing at one her best friends claiming ceremony, and things not going how she wanted she rushes off to the river Sakhir and has what she sees as a one off, steamy rendezvous with Brutus. Wolves do have one night/one off sessions with each other before deciding to settle down. However, for bears it is somewhat different, and Brutus sees their steamy night as the beginning of a relationship, in fact he wants nothing more but to claim her as his mate.

Both Brutus and Taryn are keeping their relationship quiet as they know the rest of their pack/family would not approve. For Brutus, his older brothers Rocco, and Cliff will see his relationship as a weakness and a betrayal, as he should be joining in their plan to kidnap wolf pack children to hold hostage and then exchange them for Elsie. Rocco is the main bear that is dead set on getting his revenge on Elsie, the daughter of Lazarus who betrayed the wolves, years before by tricking them out of their homes in Balmar Heights.

For Taryn, it is Elsie, Zackary and Tabor who would be the major oppositions to their relationship as obviously they did not agree with Elsie being mated to Brutus (earlier in the series) despite it being part of a deal arranged by Lazarus. In fact, Zackary had fought with Brutus (both in human form) when they rescued Elsie. Then there’s the rest of the pack to contend with…who, if anyone would support a union between wolf shifter & bear shifter? Coulde they claim each other and live in, or near to Wolf Hollow? Would the Elders Jager and Palmer and the rest of the council approve their mating/claiming ceremony?

So much happens, and changes in this book. Old enemies become good friends, within the pack and across species too. The Bear brothers, Brutus, Rocco and Cliff have to decide whether to forget the past and the old agreements with Lazarus and look to the future. With Rocco set on revenge, so much so he says their father Randall would want them to do whatever it took to serve revenge on Elsie & Tabor, the children of Lazarus. Brutus wanting to move, Cliff finds himself in the middle and soon has to decide which brother he agrees with. I really enjoyed the interaction between Brutus and his sister Brook who is living in a cabin with her homesteader human husband. I bet her father Randall was very vocal with objections to her being with a human!! I thought it was really funny how Brutus knew he had to obey his sister’s rules to sit at her table and eat a meal with her and her human. I would have loved a bit more of Brook and Jake’s story, Oooo, hint…hint…maybe it could be a novella? It would be great to learn more about the bears past from way back in Balmar Height too and his interactions with the devious Lazarus.

I really enjoy all the heritage details of the different races, wolf shifters, bear shifters, witches and wizards. The ancestory of the characters has been carefully worked out and flows so well.

Once I started reading this book, I really struggled to put it down, I ended up reading it in just two reading sessions. The author writes in a way that makes it very easy to see what she is describing, such as the river Sakhir, and the different areas of wolf hollow. I love how she refers to the different pack members families and ancestors before them. There are so many fantastic detailed characters and then even more details of who the friendship cliques are, and why there are rivalries from years before. I enjoyed how some of the old jealousies and challenges between the characters were being forgotten or worked round in this book. I was in the same mind as Taryn in match making and pairing her brother Hudson and Nudara. What more can I say, I love the setting of Wolf Hollow, the different species of shifters and how they relate to each other, both in their own species and across shifter races, the way Brutus already knew and was friends with some of the wolves from the Glenn Meadows pack, yet because of a past slight were almost sworn enemies with the Wolf Hollow Pack. I honestly didn’t want the book to end! Definitely looking forward to the next book in this series.

My immediate thoughts upon finishing this book were that I absolutely love the Taryn and Brutus love story!

Summing up loads of things happened in this book, and I loved it. I can’t believe there is only one book left! It is a fantastic series so far and I am sure the last book will not disappoint.