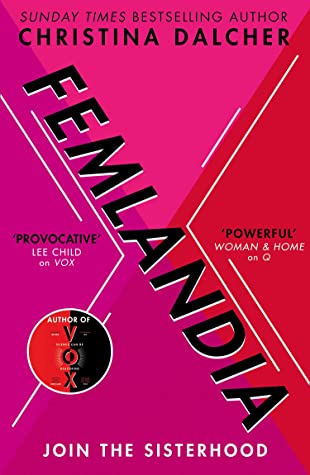 BLURB from Goodreads
The United States has sunk into total collapse.

Men in positions of power have wrecked the economy and left women to suffer and pick up the pieces.

Miranda Reynolds has lost her husband, her job and her home. There’s only one place left that she and her daughter Emma can go. Femlandia.

Femlandia is a female-only community. A utopia for women. There’s a reason Miranda never joined before. Now she has no choice.

With what Miranda knows about Femlandia’s founder, she’s right to be wary. While life outside the gates is fraught with danger, there’s something just as sinister going on within.

REVIEW
As I have read and loved VOX and Q both amazing, thought-provoking books by Christina Dalcher, I was eagerly awaiting her next book release. I have seen two different covers for this book, both have pinks and reds heavily featured on them, representing the female orientated community called Femlandia which is central to this book. I have to be totally honest that I do much prefer the HQ publishing cover. I prefer the harsher lines and the subtle X depicted within the cover. I feel this cover is a stronger representation of the tough, hardened by their encounters with men, women that live in Femlandia. The other cover by Berkley also suits the book in its own way but its perhaps softer in representations, using the feminine facial profile and the two lonely figures (representing Miranda and her daughter Emma). It refers more to the women creating a happy male free existence living in peace and harmony together. The genres I have seen listed for this book are General (Adult) Fiction, Sci-Fi, and Fantasy, but I personally think it is so much more. It is Futuristic, it’s Speculative Fiction, and I would also say it has some elements of horror in there too. I think it will appeal to a wide variety of readers.

The main three central, most important characters in this book are Win, her daughter Miranda, and Miranda’s daughter Emma. The world has literally been brought to its knees and it’s a survival of the fittest scenario. Miranda’s husband of 20 years, Nick has always enjoyed spending money and living the good life, all that was required of his wife Miranda was to look pretty on his arm and take care of their daughter, Emma. When the money dried up, and those that invested on Nick’s recommendations grew angry, Nick took the what would be viewed as some as, the easy way out and committed suicide, leaving Miranda and Emma with the angry friends and neighbours. However, when everything goes to nothing, when stores have no produce to sell, and neighbours are choosing to make suicide pacts with their partners as they can no longer face life as it is now, Miranda has two choices. She can be like some of her neighbours and give in shooting first her daughter Emma and then herself or she can gather what little supplies she does have and make the journey to a place she never dreamt she would ever consider going to, Femlandia. Miranda’s mother Win created Femlandia with another young women called Jen. Femlandia is a community of only women, most of whom have had bad experiences with men. Some of the women have fled domestic abuse, rape, molestation and other such abuse metered out by the men in their lives.

Miranda had a falling out with her mother Win when she shockingly discovered the truth behind her own father’s suicide. Miranda doesn’t like Jen, the “perfect daughter” that Win always wanted her to be. Miranda had been a daddy’s girl, loving pretty dresses, playing with dolls. As Miranda got older. she wanted nothing more to meet the love of her life, marry him and have children. Miranda grew into a “lady that lunched” with a small group of similar minded friends. Win was sorely disappointed, she wanted a strong, forthright, daughter who dressed in pants or dungarees, refused to play with dolls, who would grow into being an independent woman who refused to rely on a man to look after her. When it became blatantly obvious that there was no way Miranda would be the person her mother wanted her to be, Win turned her attention onto Jennifer Jones. Jennifer Jones, didn’t play with dolls, she eagerly took the part in Win’s “act” playing the daughter Win wanted Miranda to be. Miranda was happy enough at the time to step back and let Jen be the “perfect daughter.” Jen became the person to help

It shows how desperate things have become for Miranda that she would even consider travelling to Femlandia in the hope of being able to have some safety and a future for her daughter Emma.
It’s not an easy journey, especially when Emma is about to be attacked by a group of men. Miranda has to make a split second decision, to aim and fire the gun that belonged to her husband Nick, that he had left for her with his suicide note. By the time the two women reach Femlandia, Emma has strangely regressed to being mute, communicating only via a sign language that Miranda taught her as a child. The same sign language that was the basis of the way Miranda communicated with the chimpanzee at the zoo where she worked.

When Miranda and Emma reach Femlandia they are given no special treatment for being the daughter and granddaughter of the woman that founded the community they are about to enter. It turns out both females have been hiding a secret from each other, perhaps that is one of the reasons that they eventually being eagerly welcomed into the female only society that is surrounded by barbed wire topped electrified fencing.

Though initially life seems almost idyllic within the boundaries of Femlandia, Miranda soon begins to see the negatives of her decision to join the society of women. Emma seems to be quickly, and easily spirited away from Miranda. The relationship between Jen and Emma becomes ever closer, with the pair having their own routines and secrets. The irony of Jen stealing away another member of Miranda’s family from her is one Miranda sadly accepts as the price of the safety of her daughter.
It’s made quite clear by Jen that she is in charge and that what she says is taken as “law” within Femlandia. Miranda is presented with a long list of expectations and rules that have to be fulfilled in order to stay in Femlandia. Rulebreakers are punished, and Miranda ends up being first fairly gently admonished, then upon a second offence she is disciplined more harshly and threatened that another infraction will result in her being set out of Femlandia. There are lots of secrets being held within the community, Miranda tries to discuss things with her old friend and ex lady who lunched Sal, but it seems Sal is Femlandia through and through and just accepts what has to be has to be. In fact, Sal warns Miranda not to rock the boat. It turns out all those years ago Win really did underestimate her own flesh and blood because Miranda refuses to just accept what she is told and goes in search of the answers to the many questions she has about the truths behind Femlandia and its occupants. It does eventually turn out to be the case that not everyone is truly 100 percent happy with how they are living within Femlandia and they end up kind of championing Miranda, and when a choice has to be made, and Miranda puts her mother daughter relationship and her own life on the line she ends up receiving a little help from slightly unexpected people.

I could seriously go on and on about the world building, the society, its rules and the fantastic characters in this book forever but of course I can’t and I also do not want to reveal anything that would spoil the natural unfolding of this book when you read it for yourselves, because, yes I definitely recommend reading it!

I felt immediately pulled in and intrigued by what direction this book was going within its first few pages. The book held me tight until the very end and the epilogue. I’ll be totally honest the “final showdown” between Jen, Win and Miranda had me guessing which way it was going to go. It’s difficult to talk about without giving away spoilers but I thought it was going to go down more of the route of Win & Jen being like two sides of the same coin and always being together in life/death in this stark new apocalyptic world.
My immediate thoughts upon finishing the book were, Wow! Its was a great read, but then I thought more about the book, the final showdown between Miranda and Jen…..and I couldn’t help mulling it over and over. In fact that’s why it’s taken me longer to eventually sit down and write my review.

So summing up, and I know this may seem like I am being super picky but I truly feel like I would have preferred the book to not have the epilogue, as it felt like it was a bit rushed and almost like a list of tied up loose ends readers may have had. The epilogue like it existed to just answer the questions readers would wonder about, which could have been left open to each individual readers own interpretation. Yes, it’s good on one hand for the author to wrap everything up as they see it but on the other without an epilogue, I can’t help wishing that there perhaps could have been a book 2, part 2 or a novella, which dealt with how things continued on in Femlandia. I honestly felt that I didn’t need all the information in the epilogue, or perhaps not as much of it, I wanted to be left pondering what I thought may have happened. Having said all of that I truly, highly recommend reading this book. It would be a fantastic book club read, there are so many discussions that are raised by it. I can imagine different readers having a lively debate about the characters as well as the themes of the different types and levels of abuse. I honestly cannot wait to see what is going to come next from this author. I am finding myself drawn more and more to this type of speculative fiction, I adore reading and discovering the different characters thought processes for their individual actions and decisions.