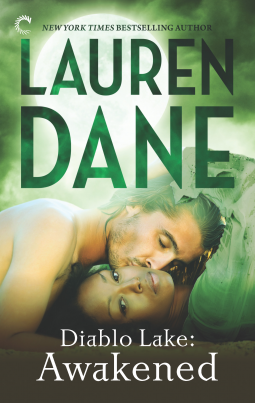 BLURB from Goodreads
It’s autumn in Diablo Lake and the town is buzzing with preparations for Halloween, Samhain, Collins Hill Days, and the wedding of the newly elected mayor and her wolf shifter fiancé.

Ruby Thorne can’t think of a better time of year to come back for good and open the health clinic she’s been planning for the last six years. Her connection to the town and its veins of magic have snapped back into place, flooding her with a power eager to jump to her call.

She has a sense of rightness. This witch is exactly where she’s supposed to be. So it’s not much of a surprise that he comes back into her path just like he was meant to…

Damon Dooley has spent the last few years learning how to run the pack at his older brother’s right hand. There’s been upheaval. Outrage. Violence. Old rules have created a silence so crushing it’s collapsed the fabric of not just the wolf shifters, but the town as a whole.

And yet, Ruby has returned. Man and wolf agree she needs to be in their life regularly, and before long, things move from serious to something magically deeper.

Bound to one another heart and soul, both committed to what’s best for Diablo Lake, Ruby backs Damon as he pushes for much-needed change. But when something falls into Ruby’s lap and she learns the whole, terrible truth, secrets need to be spilled. How—and by whom—becomes the only question.

REVIEW
I had initially been a little worried about remembering relevant things and the names of those that live in Diablo Lake, but honestly, I needn’t have worried at all. From the minute Ruby steps in to support her best friend and soon to be married Aimee against her soon to be bitchy mother-in-law, Scarlett Pembry I felt pulled back into both the world and lives of the Diablo Lake residents.

Ruby Thorne has returned home to her witch family in Diablo Lake, she is now qualified and ready to open the health clinic that’s been in planning for six years. Ruby is happy to be home, in fact it feels amazing.

Ruby had been dating Damon Dooley before she left Diablo Lake and they both agreed to put an end to their “romance” before she left, giving them both options to date other people rather than trying a long distance relationship. Though they parted on really good terms and it had been a mutual decision the can’t help but feel a little awkward around each other when they bump into one another in Diablo Lake. The universe seems to be throwing the couple in the direction of each other, as when Ruby wants somewhere to live, it is Damon that as part of his real estate business shows her the homes available. There are three properties to choose from and choosing where to live is important as Ruby needs her “witchy” side to feel at home and comfortable. It also seems that Ruby is in demand with both Dooley and Pembry pack hoping she will choose to live on their land. Having a witch on your land can be very advantageous to either pack.

This book has all the warm cosy witchy, shifter pack vibes with some romance and pack politics thrown in. What with all that and the upcoming wedding of the newly elected Mayor Aimee who is marrying the Pembry Pack Alpha, Macrae. Then there’s the traditions of Halloween, Samhain, and Collins Hill Days to be observed and celebrated Diablo Lake is certainly bustling. Ruby is also busy with Katie Faith getting the newly opened health centre up and running.

The younger, newer Alpha’s and their younger pack members want to create and keep a truce between the two packs. They want to modernise the laws and the way punishments are dealt with and talked about. There’s one particular law that both Alpha’s want to get rid of, but there is a lot of negativity and obstructions being thrown in the path to doing this. It is of course the “queen of mean” Scarlett Pembry at the bottom of not wanting the law changing, which eventually has people, particularly Ruby wondering what Scarlett and the older members of her family have to hide!

I adore the nods to normal life that Lauren Dane includes in her books, such as one of the characters shopping and using a trolley that has a wonky wheel. It seems even paranormal beings have inadequate trolleys! I loved the way the other male shifters, Jace, Macrae and twin brother Major had an easy camaraderie and thoroughly enjoyed teasing Damon and Ruby. I also thought the way the possibility of Ruby’s beloved grandmother Pearl perhaps beginning to succumb to the onset of dementia was handle truthfully, realistically and sensitively. I loved how Pearl Thorne, cheekily, unashamedly flirted with her grand-daughter Ruby’s fiancé Damon. The author takes you through a whole range of emotions and character journeys whilst reading the book. There’s so much going on in Awakened, the romance of the wedding and rekindled love, old feuds still being held onto, cantankerous shifters not willing to change and accept help from the new health centre. The girls get togethers are always funny, referred to as “Nip, Stitch & Bitch” meetings. I really like the feelings of belonging and family within the book too. The endearing yet at the same time comedic interactions between shifter Damon and Ruby’s dogs make great reading.

My immediate thoughts upon finishing the book were that I had really enjoyed re-visiting Diablo Lake and its residents.

Summing up despite it being “years” since reading the first two books, I found that I easily slipped back into the world of Diablo Lake and loved reading this book. I do really hope that Lauren Dane writes and releases more books in this great shifter/witch, magical series.