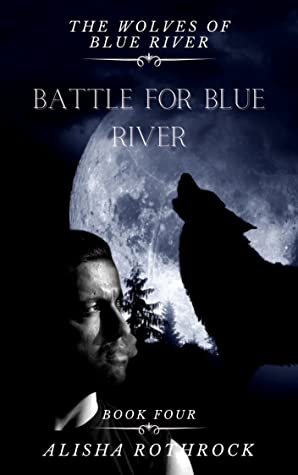 BLURB from Goodreads
It's been a long, rough road for the trio of teenage wolves, the quick-witted Nanny, and the rest of the wolves joining the fight to bring down the Alpha of the Blue River Pack. More challenges lie ahead for Lena and her ragtag pack of misfits. Love, loss, fear, and the burning need for revenge will spur seventeen-year-old Lena Bluethorne into the fight of her life, and this time she must stand alone. The time has come to fight for what is hers, and for the ones she loves. Will Zane maintain his stranglehold on the wolves of Blue River, or is there a new dawn coming for the pack?

REVIEW
The cover of this book again fits well with the prior books which I really like. After reading the previous novella’s I was looking forward to reading this one as I couldn’t wait to see what would happen when Zane and Lena came face to face.

The book has a prologue which gives a catch up on what has already happened whilst setting the scene well for what is to come next.

All the main characters are pondering about what will happen when Lena finally faces off against Zane. When Damon is missing, everyone at first thinks he has just gone for a run, but it soon becomes apparent he has somehow been lured or kidnapped. Lena is out of action and in pain. We learn that Lena and Damon are so connected that they can communicate with each other as well as feel each other’s pain. Unfortunately for them, its not just them that know this and Zane plans to use this to his advantage. Ana has to step up and lead the wolves when Lena is incapacitated due to feeling what Damon is being put through.

My favourite characters in this novella were Lena, Nanny and Jane who are really central to everything that is happening. We find out Nanny may have prepared Lena for a lot of things but failed to prepare her to feel her mate’s pain as if it is her own, despite going through it herself. It was Jane that helped Nanny through her ordeal and thankfully she is on hand to help Lena too. The characters I enjoyed not liking were Zane the cruel Alpha of Blue River and Sheila whom it seems played a large part in Nanny’s life. Zane is as cruel in this novella as he has been throughout the series, torturing his son Damon in and effort to weaken Lena. When it comes down to an actual fight, Zane has no intention of making it a fair clean one. In fact, he plans to use someone else for his own gain, though thankfully this actually backfires on him. The book reveals both Lena and Ana are having prophetic dreams, though the path forward even with these dreams are not totally clear and it takes some time for the two teens to interpret them.

My immediate thoughts upon finishing the book were that I had really enjoyed revisiting the Blue River Pack and learning more about the Opal Crescent pack too.

To sum up there is plenty of action, fight training and tension building in this novella, along with more hidden secrets to be unfurled. Alas as in all battles and wars there are casualties and yes sadly, we do lose a well-loved character but its all in context and for benefit and conclusion of the story.