REVIEW - OVERDUE: BIRTH, BURNOUT AND A BLUEPRINT FOR A BETTER NHS 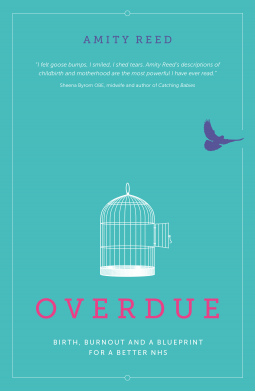 BLURB from Goodreads
Amity Reed became a midwife to serve women, but the reality of working in over-stretched and underfunded NHS maternity services soon shattered her illusions. She's not alone - for every 30 midwives that train, 29 will leave the profession. Overdue is both the devastating personal story behind the statistics, and a call for change in the NHS. Real-life stories capture the moments at the heart of midwifery: life, death, birth, tragedy and joy, and are embedded in a clear-sighted examination of what is working and what isn't in maternity services.

The result is a book that asks - and tries to answer - questions that are at the heart of many people's working lives: how can we follow our calling, provide for our families and keep ourselves healthy, if the workplace and its systems are working against us?

REVIEW
I enjoy reading non-fiction and am quite interested in maternity services and how they have changed over the years. I really like the book cover, the bird cage with the door open, maybe it is symbolic and represents those midwives flying away from the NHS, which after reading this book and having witnessed how short staffed and overworked they can be at first hand I honestly can’t say I blame them!

Amity talks about problems that occurred in certain hospitals years ago and how the national nursing strategy called ‘COMPASSION IN PRACTICE ’ was introduced.
The key values are: CARE, COMPASSION, COMPETENCE, COMMUNICATION , COURAGE and COMMITMENT. Amity rightfully says that when maternity/midwifery services suffer, women suffer, and babies can potentially die, meaning families are destroyed and for the midwive’s careers may be ruined or lost.

Amity tells us, the reader her own story of how she became a midwife herself. Amity already had children herself, she had also been a doula before going into midwifery herself. Though she loved being a doula, after three years she began to want more. Amity studied to become a midwife, it took 3 years of hard work, but Amity achieved a first-class degree.
I’ll be honest other than watching a TV programme a few years about Doula’s I didn’t have a clue who they were. A simple description is an independent birth partner and advocate for you when you are going through your pregnancy and the birth of your baby, and they often offer support after the birth too. I didn’t think doulas existed in the UK until I recently read a book called, Why Baby Loss Matters by Kay King who is in Yorkshire and is a doula herself.
Amity also gives an insight on what it is that keeps herself and other midwives on the daily grind of the treadmill, despite their working conditions being hard, pressure from those in charge and the pressures and sometimes the poor treatment and lack of thanks they receive from service users. We also see an American’s view of our free maternity services.
Amity reveals that though it is the hardest part of midwifery she loves the post-natal part of her job. Amity explains that she has to make sure of eating something substantial before her shift as it is a regular occurrence for it to be so busy that the midwives hardly have the chance for a drink let alone to sit down and eat. Amity also reveals how those you are working with can make a great shift or bad one. Amity also talks of understaffing. In the specific ward she talks about it can care for 21 mothers and babies, and it is considered as fully staffed with 3 midwives, 2 maternity assistants and just one infant feeding specialist on the floor for a day shift. Despite these numbers considered as “fully staffed” it is not uncommon for there to be just two midwives and one maternity assistant. This understaffing can be because of staff sicknesses or lack of budget, or that one of the midwives has been called over to the labour ward, as women in labour always take priority of those who have given birth. The labour ward is seen as where “all the action is” but the post-natal ward also has its own important needs. The post-natal ward is often called the “Cinderella” part of the Maternity services. Amity has spoken to many women about maternity services who have said that they felt alone and uncared for after they had given birth.
Amity reveals herself and many other midwives often say the job isn’t worth it, they could go get a job in a supermarket and it would mean at least the same money but a lot loss stress. So why do these midwives stay? Because they want to help the women, the new mothers, those with difficult birth, or those going through baby loss.
On TV fictional midwives either present day or in the days gone by such as Call The Midwife are portrayed as there always been enough staff, beds for mother and baby as well as having lots of time to sit and help the new mums etc. In reality the real maternity service has a heck of a lot of tests, measurements to be done repeatedly as well and reams and reams of paperwork that takes hours to be done. Which I honestly cannot blame the midwife feeling resentful to paperwork when it is stopping them from doing the caring which they originally signed up to do when they became midwives.
As with most inspectorate bodies, when the CQC turns up on a maternity ward they don’t see the shifts where there are only 2 midwives on a post-natal ward with 20 mother & babies to be cared for. They simply don’t see the stress the midwives are under, whether it’s from urgently sending for a doctor to check a baby’s heartbeat and as the Doctors are also short staffed the midwife is worried, they won’t get there in time. They do not see the midwife working way past the end of her shift to fill in her paperwork which means by the time she gets home she won’t get time with her own children as they will already be in bed. They don’t see the midwives going the extra mile trying to source clothes and baby equipment for a mum who has nothing.

So how would Amity changes things? Amity would propose a further set of “6 C’s” be brought into action, Choice, Consent, Creativity, Connection, Collaboration and most important of all and the ultimate goal, Change.

Having said the negatives about being a midwife and the current maternity services please don’t go into the book thinking it may be all negative as the author, Amity Reed does cover how bad things can be, but she also puts forward a solution to every problem she raises.
I found it interesting to read how things seem to be going full circle with less births being in hospitals and more of a push towards birth centres and/or home births. I could go on and on about this book, it’s a subject I find fascinating after two pregnancies myself, the first one in 1993 ending at 22.5 weeks in a “silent miscarriage” on 15/03/93 in a hospital side room, with me confused, scared, no explanations, uninformed, given drugs to bring on a “natural” birth. Eventually giving birth to my son on a commode that had been brought in when I asked to use the toilet. Then the next morning listening to all the other mum rightly so talking about their healthy babies. Then another pregnancy in 1996 that resulted in me giving birth a baby girl on the 29/02/96 with the help of an amazing midwife who stayed well past her shift as the labour ward was so under staffed. She even came in early for her next shift and made a point of dropping in on me to ask how myself & my daughter were.

To sum up I truly found the book interesting, informative, and enlightening. I wholeheartedly hope the changes Amity talks of in this book come sooner rather than later. I hope our NHS remains what it was set up as, a free care to all, whenever it is needed and not sold off becoming privately owned. I also understand that those in the NHS deserve fair pay and fair working conditions. Why do those in power not speak to and work with those who work the front line on the wards to create an even better service for everyone?