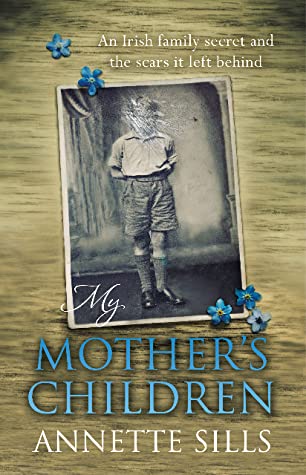 BLURB from Goodreads
Irish Mancunian Carmel Doherty’s life is unravelling. She has just lost her mother Tess and brother Mikey, her marriage to Joe is coming apart at the seams and her thirty-year friendship with Karen is on the rocks.

While clearing out her childhood home, Carmel discovers that her mother gave birth to a baby in an Irish Mother and Baby home when she was sixteen, a place notorious for its mass burial of babies and illegal adoptions.

Carmel goes on a quest for the truth about her troubled mother’s past. Her roller-coaster journey takes her from her comfortable Manchester home to the west of Ireland and to London's theatre land. It’s a journey that leads her to ask: Can we ever escape our own family history or is our destiny in our DNA?

REVIEW
The cover of this book features a probably wooden table top with a photograph of a young boy laid on it. The boy’s face has been obscured/erased in the photograph. There are pretty little blue flowers around the photograph that I think are forget-me-nots which would be super relevant to the content of the book. The genres listed for this book are General Adult Fiction, Historical Fiction & Women’s Fiction which all fit well. Of course, the book is based on the true story of the Irish Mother & Baby homes, but the way the author writes it makes it feel personal, as if she knows someone that has gone though, what one of the main character Tess endured.

The main character of Carmel has to empty her mother Tess’s old home as she has died. The one item of furniture she has decided to is the record player, which is described perfectly, in fact my parents had one similar to the one described in the book. Carmel isn’t sure why but she decides at the last minute to have one last look through it. It is whilst doing so that she finds an old letter. The letter is from her father to her mother, the think that strikes Carmel as strange is the address that the letter was sent to, a mother & baby home. This sets Carmel thinking why her mother has never spoken about the baby she had and why her parents just didn’t get married. Using the letter and clues she gleans from it she works out the era her mum was in the mother & baby home, and another woman is mentioned as she is the one smuggling letters in and out of the home for her parents. Carmel is naturally a little stunned and doesn’t read much into a conversation she has with one of her mum’s neighbours, but that conversation makes much more sense to Carmel later, further into her investigation and search for her older sibling. Carmel is eager to find her sibling as she feels so alone now her mother has died and prior to that her beloved brother also died from a heart condition. Luckily the gene connected to this hereditary heart condition is not present in Carmel. Carmel travels to Ireland, staying with her Aunt Julia. Julia reveals that she knew about the baby boy Tess had in the Mother & Baby Home in Tuam and shows Carmel a list of babies that died. In fact, she also shows her newspaper articles about the scandal of babies, bodies being found buried in the home’s grounds. It turns out that Tess had found out that her son was on the list of babies that did not survive despite being told by those at Tuam at the time that the baby was being adopted. Carmel has a very emotional visit to a shrine made in the Tuam Home grounds. Just when Carmel thinks everything is over, she decides to speak to the brave woman who smuggled letters in and out of the home and discovers that perhaps her brother could still be alive despite being on the list of dead. During her search for her brother Carmel does reconnect with other family members and learns more about her mother and father too.

All the while this is going on Carmel is struggling within her own marital relationship, and her best friend is becoming more and more distant from her, she truly feels alone in her search. Maybe that’s why it takes her a while to see what has been happening right under her own nose. I think her search for information about her sibling keeps her going and prevents her from become depressed herself. It’s not long since her mother’s death, before that was her brother’s death. Carmel worries she may end up with mental health issues herself, much like her mother. However, the more she searches, the more obvious it becomes what triggered her mother’s depression.

This book really does cover a lot of quite controversial subjects, from religion, unwed mothers, homosexuality, adultery, depression, and relationships. I found the book thought provoking on a lot of different levels, and it had me questioning how many women still wonder about where the children ripped from their arms in these institutions are? How many of these children have lost opportunities to meet or learn about their biological parents? I have read quite a few books set around the infamous Magdalene Laundries/Mother & Baby Homes, this one came across as really realistic and I felt tugged in and invested in the plot very early on. I felt myself thinking about those women and their babies long after I had finished reading.

My immediate thoughts upon finishing this book were that I had really loved reading a sad, sad story based around true events. So much going on. A look at Ireland, mentions of the mother & baby homes particularly the one in Tuam and the stigma surrounding unwed mothers, babies born out of wedlock, homosexuality, religion, and mental health.....I loved the very end though had kind of guessed at what would happen.

To sum up, I really enjoyed reading this book even though it is a quite sad story. It’s difficult to believe that young women were hidden away and their babies taken from them and adopted. The cruelty they had to put up with from the Catholic Church was horrendous. In fact, I think it’s no wonder Tess had mental health problems in the book with all that she went through. Another horrid thought is that all this was going on only a few decades ago. I think this fictional book is all the more poignant and at times heart-breaking when you know it is based on facts.