BOOK TOUR - THE LAST BOOKSHOP IN LONDON BY MADELINE MARTIN 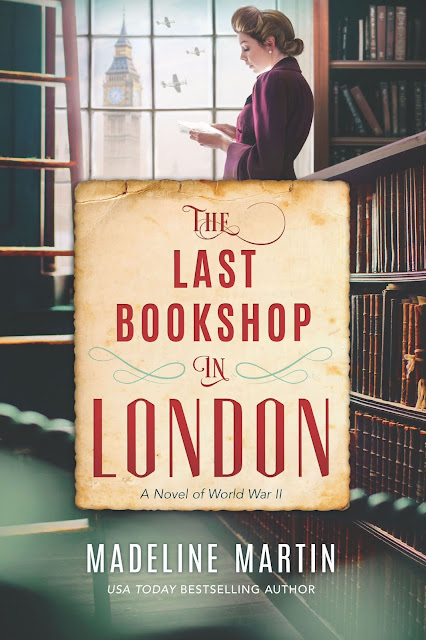 BLURB supplied by Harlequin Trade
Inspired by the true World War II history of the only bookshop to survive the Blitz, a sweeping story of wartime loss, romance, and the enduring power of literature, perfect for fans of The Paris Wife and The Lilac Girls

London, autumn 1940: the Blitz has only just begun when Grace Bennett arrives in London to find the city she’s spent a lifetime dreaming about now cast in the clouds of war, and all of her plans unraveling at the seams. After accepting a job at a charming bookshop nestled in the heart of the city, a haven for literary-minded locals, she feels like a fish out of water – she’s never been much of a reader, after all.

As the bombs rain down on the city night after night, a devastating air raid leaves London’s literary center in ruins, and the libraries and shops of Paternoster Row are destroyed in a firestorm. But against all odds, one bookshop miraculously survives. Through blackouts and air raids, Grace continues staffing the shop, discovering a newfound comfort in the power of words and storytelling to unite her community in ways she never imagined, a power that triumphs even the darkest nights of war-torn London.

August 1939 London, England
GRACE BENNETT HAD ALWAYS DREAMED OF SOMEDAY living in London. Never did she imagine it would become her only option, especially not on the eve of war.

The train pulled to a stop within Farringdon Station, its name clearly marked on the wall inside a strip of blue set within a red circle. People hovered on the platform, as eager to get on as those within were to get off. They wore smartly cut clothing in the chic styles of city life. Far more sophis­ticated than in Drayton, Norfolk.

Equal parts nerves and eagerness vibrated about inside Grace. “We’ve arrived.” She looked at Viv beside her.

Her friend clicked the top on her lipstick tube closed and gave a freshly applied vermillion smile. Viv glanced out the window, her gaze skimming the checkerboard of advertise­ments lining the curved wall. “After so many years of wish­ing we could be in London.” Her hand caught Grace’s in a quick squeeze. “Here we are.”

Back when they were mere girls, Viv had first mentioned the notion of moving away from dull Drayton for a far more exciting life in the city. It had been a wild concept then, to leave their slow-moving, familiar existence in the country for the bustling, fast-paced pulse of London. Never had Grace considered it might someday become a necessity.

But then, there was nothing left in Drayton for Grace anymore. At least nothing she cared to return to.

The ladies rose from their plush seats and took hold of their luggage. Each had only one case with them, faded things, beaten down more by age than use. Both were stuffed to the point of near-bursting and were not only impossibly heavy, but awkward to manage around the gas mask boxes slung over their shoulders. The ghastly things had to be brought with them everywhere, per the government, to en­sure they’d be protected in the event of a gas attack.

Lucky for them, Britton Street was only a two-minute walk away, or so Mrs. Weatherford had said.

Her mother’s childhood friend had a room to let, one she’d offered a year ago when Grace’s mother first passed. The terms had been generous—two months for free while Grace acquired a job and even then, the rent would be dis­counted thereafter. Despite Grace’s longing to go to London, and despite Viv’s enthusiastic encouragement, Grace had re­mained in Drayton for nearly a year after in an attempt to pick up the pieces of her broken existence.

That was before she learned the house she’d lived in since her birth truly belonged to her uncle. Before he moved in with his overbearing wife and five children. Before life as she knew it shattered even further apart.

There was no room for Grace in her own home, a point her aunt had been eager to note often. What had once been a place of comfort and love became a place Grace felt unwelcome. When her aunt finally had the temerity to tell Grace to leave, she knew she had no other options.

Writing the letter to Mrs. Weatherford the previous month to see if the opportunity still held was one of the hardest things Grace had ever done. It had been a surrender to the challenges she faced, a terrible, soul-crushing failure. A ca­pitulation that had rendered her the greatest failure.

Grace had never possessed much courage. Even now, she wondered if she would have managed her way to London had Viv not insisted they go together.

Trepidation knotted through her as they waited for the train’s gleaming metal doors to part and unveil a whole new world.

“Everything will be brilliant,” Viv whispered under her breath. “It will all be so much better, Grace. I promise.”

The air-powered doors of the electric train hissed open and they stepped onto the platform amid the push and pull of people coming and going all at once. Then the doors shushed closed behind them, and the gust of the train’s de­parture tugged at their skirts and hair.

An advert for Chesterfields on the far wall displayed a handsome lifeguard smoking a cigarette while another poster beside it called on the men of London to join the service.

It wasn’t only a reminder of a war their country might soon face, but how living in the city presented a greater el­ement of danger. If Hitler meant to take Britain, he would likely set his sights on London.

Grace turned from the poster toward the metal stairs, which glided upward on an unseen belt, disappearing some­where above the arched ceiling. Into the city of their dreams.

The advert was quickly forgotten as she and Viv rushed toward the escalator and tried to tamp down their delight as it effortlessly carried them up, up, up.

Viv’s shoulders squeezed upward with barely restrained happiness. “Didn’t I tell you this would be amazing?”

The enormity of it hit Grace all at once. After years of dreaming and planning, here they were in London.

Away from Grace’s bully of an uncle, out from under the thumb of Viv’s strict parents.

Despite all of Grace’s troubles, she and Viv swept out of the station like caged songbirds ready to finally spread their wings.

Buildings rose into the sky all around, making Grace block the sun with the palm of her hand to see their tops. Several nearby shops greeted them with brightly painted signs touting sandwiches, hairdressers and a chemist. On the streets, lorries rattled by and a double-decker bus rumbled in the opposite direction, its painted side as red and glossy as Viv’s nails.

It was all Grace could do to keep from grasping her friend’s arm and squealing for her to look. Viv was taking it in too, with wide, sparkling eyes. She appeared as much an awed country girl as Grace, albeit in a fashionable dress with her perfectly styled auburn curls.

Grace was not as chic. Though she’d worn her best dress for the occasion, its hem fell just past her knees, and the waist nipped in with a slim black belt that matched her low heels. While not as stylish as Viv’s black-and-white polka-dot dress, the pale blue cotton set off Grace’s gray eyes and complemented her fair hair.

Viv had sewn it for her, of course. But then, Viv had al­ways seen to both of them with an eye set toward grander as­pirations. Throughout their friendship, they had spent hours sewing dresses and rolling their hair, years of reading Woman and Woman’s Life on fashion and etiquette and then mak­ing countless corrections to ensure they “lost the Drayton” from their speech.

Now, Viv looked like she could grace one of those maga­zine covers with her high cheekbones and long-lashed brown eyes.

They joined the flurry of people rushing to and fro, heav­ing the bulk of their suitcases from one hand to the other as Grace led the way toward Britton Street. Thankfully, the directions Mrs. Weatherford had sent in their last correspon­dence had been detailed and easy to follow.

What had been missing from the account, however, were all the signs of war.

More advertisements, some calling for men to do their part, with others prompting people to disregard Hitler and his threats and still book their summer holidays. Just across the street, a wall of sandbags framed a doorway with a black-and-white sign proclaiming it to be a Public Air Raid Shel­ter.

Excerpted from The Last Bookshop in London @ 2021 by Madeline Martin, used with permission by Hanover Square Press.
ABOUT THE AUTHOR 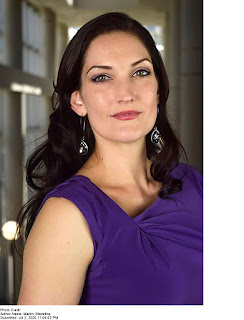 Madeline Martin is a USA TODAY bestselling author of historical romance novels filled with twists and turns, adventure, steamy romance, empowered heroines and the men who are strong enough to love them.