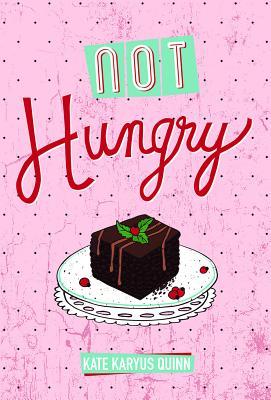 BLURB from Goodreads
June is fat. June also has an eating disorder, but no one sees. When she doesn't eat, her friends and family think they see a fat girl on a diet, not someone starving herself. When June's secret is found out by Toby, the new boy next door, she is panicked. Then she learns he also has a secret. Everyone has their own little lies.

REVIEW
The first thing I noticed about this book was the bright pink, rather girly looking cover, with a plate at it’s centre, with a rather generous size piece of cake/cookie/bun. I also discovered it was categorised as a HiLo book, and I wanted to publicise some of these books on my blog. If you are not familiar with the term “Hi Lo Book” it is a book that offer highly interesting subject matter at a low reading level, therefore it encourages older children/adults into reading about a subject they may be interested in but perhaps they aren’t so good at reading. I say anything that encourages more people into reading is great. Usually the fact that the book has the “poetry” genre label would usually put me off, but, this year I decided to read more books that weren’t necessarily in my normal comfort zone of reading.

The main characters in this book are June, Toby and June’s sister Mae. June considers herself to be overweight, everyone thinks June is on some fad style diet, only she isn’t. June has an eating disorder where she will eat nothing at all, then perhaps see a tray of buns her older sister Mae has baked and she will sneak around and when no one is watching June will eat them all. After eating so much in such a short time June will then run to the bathroom or outside behind a certain hedge to be sick, therefore ridding herself of what she has just binged on. There is no in between with June, she is either eating nothing at all, or really bingeing until the point at which she is sick and ridding herself of what she has just eaten. It is during one of her trips down the garden to her favourite bush to be sick behind that she meets Toby. June is mortified this boy she doesn’t recognise has seen her being sick, he knows her secret. June settles her worrying by thinking she hasn’t seen this boy before so maybe he was just a visitor, what is the likelihood of her seeing hm again. Unfortunately for June, this boy, Toby has just moved in with his grandmother, Junes next door neighbour and will be attending the same school. June is really scared she’s convinced that Toby will say something so when he doesn’t, she is shocked.

I loved the characters of June and Mae, that they have each other’s back no matter what, even though they may not put it into words every day. The book unfolds a little bit like a diary or as if June is actually talking to the reader. June describes herself as a liar, but she only ever tells one lie and that’s when she says “I’m not hungry”. It’s sad that June feels like she has no one to confide in, or rather she feels like she hasn’t got anyone. When all the time her sister Mae is insecure about her weight and curves too. Though as the older sister has a tad more confidence and dresses very well for her individual body shape. When the two girls finally trust each other to open up to one another , they discover they are a formidable team.

I aren’t totally sure what I think of the character called Toby. Sure, he hasn’t had the easiest childhood but now he is living with his grandmother things are better. Though he knows about June’s issue with food and doesn’t call her out on it or ridicule her at school, I feel, in my opinion that he plays with her emotions and the fact she isn’t very confident.
Toby has two separate identities, the one he is when he is at home with his grandmother and wants to go on walks and hold June’s hand. Then there’s the Toby at school who is part of the popular gang, that girls crush over and he doesn’t even acknowledge June’s existence.

I was really annoyed with June & Mae’s mother when June admits to not eating her mother’s reaction is not to encourage her to eat but to almost pat her on the back and say she wished she had June’s will power to not eat anything!

The character I loved to hate was Erick. By the way, I seriously laughed out loud at the parts where he is referred to as Er..”ick” it really suited him! I despised the way he treats both his girlfriend Mae and her younger sister June. The cheek of him getting angry when Mae makes different cookies to the usual chocolate ones that he has been selling to his friends!! I found the homecoming dance scene amusing when for a change he is on the receiving end of the sarcasm rather than being the one dishing it out.

I won’t go into detail but there is a scene where June has to make a choice and I have to say I am so happy with the choice she made. A few days or weeks earlier she wouldn’t have been confident enough in herself to make the choice she did.

So, to sum up I found the way June’s eating disorder was described and talked about to be in a simple, realistic but very honest way. I think this book would make a great conversation starter within the right setting, giving a safe environment for females or males to start a discussion on their own eating habits.