REVIEW - GIRL WITHOUT A FACE BY NASSER HASHMI 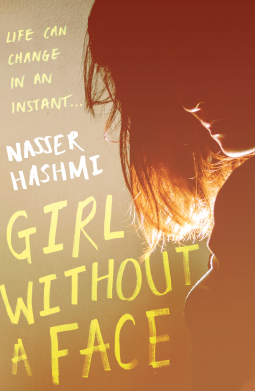 BLURB from Goodreads
Laura Danes was a perfectly normal girl with ambitions and dreams of becoming a successful filmmaker. That is, until one night, outside a secluded train station, changed the course of her life forever. With one action, the gang that threw the acid burned away, not only her skin, but also her future.Three months on, Laura is still struggling to make sense of it all. Things like that shouldn’t happen, not in a small market town, not to everyday people. Not ever. Although her mum tries to support her, Laura finds little to find joy in. Life no longer seems to hold any promise or surprise – until a member of the gang contacts her begging for forgiveness…With Jake opening up a new world for her, Laura finds a spark of the old filmmaking interest as she learns about the gang culture Jake comes from. With life slowly moving forward, Laura learns again to take risks, find courage and show others that one horrible event should not have the power to control your life.

REVIEW
The cover's main feature is a shadowed image of a female with her head angled downwards, its as if the female is shielding herself turning away from the sunlight and hiding. This image fits very well with the character of Laura in the book. The byline is a perfect fit for the book content, “Life Can Change In An Instant”. It certainly changes in mere seconds for Laura Danes.

The book begins with Laura and her mother, Sheila Danes collecting all the mirrors in the house and putting them away in the attic so they are out of sight. Laura doesn’t want to see herself in the mirrors since the “incident”. Laura used to pose about in front of the mirror and take loads of selfies like and the males & female of her age did that was until “that night”. The “incident”, “that night” changed her life forever quite literally from the flick of a wrist. Laura had been returning home, when she became distracted by her phone so she didn’t really notice the group of hooded males to begin with. Then when she noticed them there was no way to really avoid them, so she tried to feel and appear confident as she was walking past them. She wasn’t looking down at them, talking to them or anything, she merely wanted to be on her way but the leader of the group of hooded males had other ideas. The leader who we later learn is called Mark Lawler has “had a bad night” he is looking to cause someone trouble and he flicks his wrist throwing the contents of the bottle he has been carrying all night splashing the liquid inside of it into Laura’s face. It’s that instance that changes her life as the liquid inside the bottle is acid.

Laura had been a normal happy, make-up, looks, hair, clothes and selfie taking obsessed young woman. All that, along with her future and dreams of getting into film making are, she feels, shattered beyond repair. Naturally a young woman having acid thrown in her face is an horrendous crime and means lots of pain and hospital visits for Laura, who in reality is still grieving the death of her father too. Laura begins suffering panic attacks along with not wanting to go out in public. Laura fears being stared at, or pointed at, shouted at in public.

The Police are doing their best to catch the acid throwing gang but without a detailed description of them it appears their search will not turn up any successful results. Then Laura receives a handwritten note from Jake Lawler, the younger brother of Mark Lawler, the leader of the gang and the one who threw the acid in Laura’s face. In the note Jake asks Laura to meet him, to talk to, he wants to explain what happened that night. Over time and many meetings Laura gets an insight into Jake’s life and realises that something awful has happened to him in his past too. The rest of the book tells how Laura decides she wants to meet Jake Lawler, confront one of her attackers, find out what he wants to say to her. She then begins following the different members of the gang and secretly films them going about their often, shady business in crime and day to day life. Laura becomes closer to Jake, so close in fact she forgives him for his part in her assault. When Laura makes a film about her attackers and it’s a huge success, because of the film the Police catch the attackers and they charged and locked up. Jake stays in touch with Laura and finally reveals his dark past to her.

My favourite characters were Laura and Jake, they seem to be drawn together both feeling fragile with incidents that have changed their lives.
I would describe the character of Jake as being the runt of his family, the one picked on, made to do the dogsbody work and bullied. I would also liken Jake to being like a “broken bird” the things that happened in his past that he has yet to come to terms with. Laura was a strong, confident person before she was attacked and throughout the book you see her fighting her panic attacks to regain her confidence and her life. I found the stories Laura learnt when attending “Bon Visage” (a retro reference, explained in the book) were interesting. Two of those attending the support group who share their stories illustrating other acid attacks and the perpetrators apparent reasoning for carrying out those attacks.

My immediate thoughts upon finishing reading the book were that the
ending seemed odd and the story felt unfinished. Laura may have found closure and be ready to move. Sheila has certainly moved on and is creating a new life for herself with Peter. Jake's story has to be been left in the air only half told? Maybe Jake will have his own book? But if that's the case half of his life story has already been told.

Now my honest opinion, I did like the book, though in some parts the pace was a little slow for my taste I continued reading to the end. I hate to DNF a book unless I absolutely have to. It also felt a little overly descriptive in some parts, yet rushed in other. There was also lots of little sub plots tacked into the main Laura/Jake plot. There’s the whole widowed Sheila who with Laura initially appears to have not gotten over the loss of husband/dad Michael who regularly gather friends around to re-enact his not so great plays. Then we have the sudden entry of Peter, the new boyfriend who quickly propose and marries Sheila. We also have other, bits sort of rushed in like Tom & Sophie but then it ends before it even goes anywhere. I think Sophie needed to be introduced and appear more in the book, as surely you would be around more for your best friend who had been attacked with acid. Especially as the character of Sophie feels she is to blame as she was the one on the phone distracting Laura from her surroundings and any potential danger. Some parts of the book flow really well others feel a little stilted or pushed in to fill out the book more.