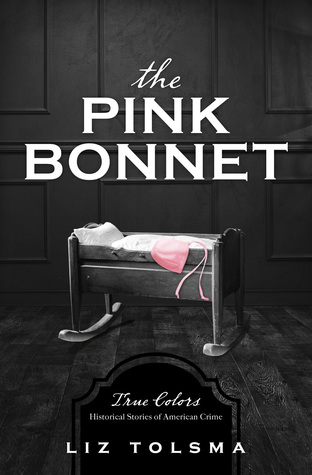 BLURB from Goodreads
A Desperate Mother Searches for Her ChildWidowed in Memphis during 1932, Cecile Dowd is struggling to provide for her three-year-old daughter. Unwittingly trusting a neighbor puts little Millie Mae into the clutches of Georgia Tann, corrupt Memphis Tennessee Children’s Home Society director suspected of the disappearance of hundreds of children. With the help of a sympathetic lawyer, the search for Millie uncovers a deep level of corruption that threatens their very lives. How far will a mother go to find out what happened to her child?

The first thing that caught my interest about this book was the cover, the stark dark background, the homemade looking wooden rocking crib. The only colour on the cover being the pink bonnet which plays an important part in this story. I think the cover definitely does its job by pulling you in making you want to know where the child is and what has happened. The blurb then goes on catching and pulling you in more, which consequently pushes you into having a grave concern for the child who the crib and bonnet belong too. This book is also based on a true story and I admit I have watched a film based on the true events that inspired this book.

The main characters in this book are single mum Cecile Dowd, and her much loved three year old Millie Mae. Cecile’s husband sadly died and that means she is on her own looking after Millie Mae. Cecile’s family fell out with her over her choice of husband. Despite the fact he has now died and so no longer in her life they still return her letters unopened. Cecile has a part time job at a nursery but her savings and rapidly being used and her wages just aren’t enough for her and Millie to live on.
Cecile has to look for other jobs but then that means asking for help taking care of Mille Mae whilst she attends the job interviews.

Mrs Ward, her neighbour is a mixed blessing, she is a bit of adult company for Cecile and she will watch over Millie Mae whilst Cecile attends the job interviews, but she also has an opinion on everything and is nosey too. It is on one of these occasions that Mrs Ward is caring for Millie Mae that the old lady signs the three year old off to Miss Georgia Tann who runs the Tennessee Children’s Home. When Cecile returns home after her interview Mrs Ward reveals what she has done. Cecile cannot believe it and is naturally beside herself with a mixture of emotions. Cecile’s first thought is to get to the offices of Miss Georgia Tann and ask for Millie Mae back, but when she arrives the offices are closed.

Cecile tries numerous ways to gain an audience with Miss Georgia Tann to ask, plead and then beg for Millie Mae back. Miss Tann’s attitude is that Millie Mae will be much better off adopted by a two parent family who have a better financial standing than Cecile. It seems lots of people agree with Miss Georgia Tann and seem willing to turn a blind eye to the methods she uses to gain access to these children that she then sells to new parents. Cecile of course refuses to give up on Millie, and after trying to learn more about Miss Georgia Tann realises she is not the only parent to have her child stolen and sold on!

My favourite character within the whole book was of course Cecile, the way she continues to fight relentlessly to get her daughter back. Her persistence in seeing Georgia Tann. The way she eventually gains help from someone close to Miss Tann. Though Cecile is not rich in a monetary way she has overwhelming love for her daughter and that’s what keeps her going over the days, weeks etc it takes to find her daughter. I did also like the character of Percy Vance, who helps with all the legal paperwork needed to transfer the child from parent to orphanage and then to their new parents. It is Percy who uses his “inside” knowledge and his work acquaintance’s to trace the children Georgia Tann has literally ripped from their own biological parent to then sell to whomever she sees fit to sell them to. Percy Vance puts not only his job on the line but his life too! Miss Georgia Tann and her important friends are not eager to be found out and are not adverse to underhand tactics to get rid of anyone making a fuss about what they are up to.

Even though I had seen a film based on Miss Georgia Tann and her exploits, this book was still fascinating and intriguing, yet horrifying and implausible at the same time. It also makes you ponder what goes on behind closed doors nowadays. For if this harsh practice of removing children from their biological parents and then re-homing them with “better off” parents with “better homes” could happen back in the thirties it could quite well be happening these days too!