REVIEW - NO FENCES IN ALASKA BY GLEN SOBEY 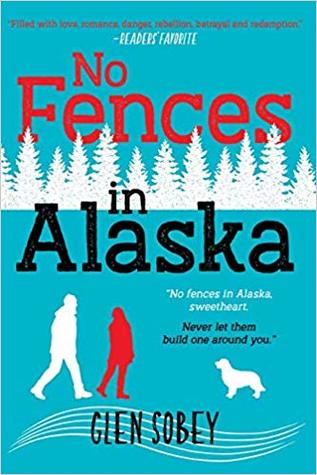 BLURB from Goodreads
Their worlds are about to come crashing down...


At sixteen years old, Harper Lyon's life is spinning out of control. She threatens her parents with suicide unless she can meet her drug-dealing boyfriend, a college student who doesn't know she's pregnant. Cooper Lyons, her estranged grandfather, lives in rural Alaska with only his dog and cat for company. He has just been diagnosed with early onset Alzheimer's, and he doesn't plan on letting the disease run its course. Harper needs to escape her parents and decide what to do about the baby. She and her grandpa are worlds apart, but they may be exactly what the other needs. When Harper calls her grandfather, he welcomes the opportunity to help her and redeem his previous failure with his daughter Heather, who died from a drug overdose years ago.

Can they save each other?

I was searching my kindle for my next read and the cover of this one caught my eye. I then saw the byline of “No fences in Alaska sweetheart, “Never let them build one round you” which made me want to read the blurb which had me want to start reading the book. The genre’s listed for this book are New Adult, YA, & Teens, which this book is certainly suitable for but I would like to add I think the book should also be classed as General Fiction as I think many adults would thoroughly enjoy reading it.

The very basics of the story are that Harper Lyon is a young 16yr old who is not getting on with her parents. Harper’s mother Natalie and her parents are very religious and strict and Harpers father Greg, found religion later in life and is trying to be very strict with his children. Natalie’s parents put a lot of pressure and have exceedingly high expectations from Greg as headmaster of a school they are funding. The slightest infraction of rules is to be punished no matter who that individual is. Which is how Harper finds herself expelled from the school her parents both work at. Greg also carries what some would say is emotional baggage from his childhood. The baggage he carries is in reference to this emotional baggage is in connection to his younger sister Heather who had been into boys, drink and drugs. Heather had died despite the best efforts of Greg’s parents. Greg blamed his father for his sister’s death and also for having an affair and causing the total breakdown of the family. This is one reason that he comes down so hard on Harper, but it is also a reason she feels she cannot talk to her parents. As Greg presumes Harper is on the same track of behaviour his sister was and attempts to clamp down even more on Harper. This however just pushes Harper further away, and into the arms of an older boyfriend, Zachary who uses her insecurities and ends up having her meet him in secret, gives her drugs and when she wakes up next to one of Zachary’s friends in bed at the side of her she realises she is in fact being used. I won’t go into much more detail but Harper decides to go to her Grandfather, (her father dad who they haven’t seen or spoken to for years) to live with him. Harper uses blackmail to get her parents to purchase her a ticket. Sadly, the blackmail is in a way a last cry for help from Harper to her parents but her father is so worried about losing his job that he caves and buys her the flight ticket. Harper doesn’t know what life will be like with her paternal Grandfather but assumes at this stage it can’t get any worse. Harper is totally unaware that her Grandfather, Cooper has just been given a diagnosis of Alzheimer’s and is still coming to terms with that. Cooper admits he may not have done everything right in bringing up his children or his marriage but he is sure and really wants to help this granddaughter that he hasn’t seen since she was a young child that stood on a table during a boat journey and sang at the top of her voices. Those on the boat applaud her singing, however her father Greg did not, pulling her from the table saying people have to eat from those etc and telling her off. In fact, he argued with his father about it and they had never visited each other since. Cooper hopes Harper still has a love of singing as it is something, they will have in common that they can build on. Which they do become increasingly close yet still keep their biggest secrets to themselves. Eventually there comes a point where the secrets reveal themselves. It is through the process of tackling one of the secrets that Harper meets a boy around her age who works as an EMT and plays his guitar and sings around different venues for money. It’s not long before Cooper has them set up singing in different venues for payment. Then things take a turn for the worse for both Harper and Cooper…..who can help?

I feel like I want to tell you so much more, but to go into more detail, reveals far too much of the plot, and you need to have the sequence of events to be revealed in the order and at the time the book does so.

My favourite character is Cooper, the man who has been living alone without his family for such a long time with only his cat Houdini and dog Snowball for company. He is desperate to help his granddaughter when she reaches out to him, despite him not knowing the whole story of her situation. As time goes on in the book, Cooper becomes eager to help Harper find new interests and “set her on the right track” whilst he is still well enough to do so. He is determined to help to set up Harper’s future before he succumbs to Alzheimer’s. Having said that Cooper is determined no one will have to look after him when he gets to a stage in his illness that he can no longer take care of himself.

I seriously loved this book, I was easily drawn into the book and went from thinking Harper was going to be a maybe “wayward”, alcoholic teen but the further you read into the book you realise that she is somewhat misunderstood. In that when an alcoholic drink was found in her bag at school and it is reported to the headmaster who is also her dad, she is immediately presumed guilty and expelled then blamed for “ruining” her father Greg’s reputation. Her father seems very quick to believe the worst of his daughter, he cannot seem to help himself but compare Harper to his sister Heather. As a reader you can understand why she feels she cannot approach her parents to talk about her situation and problems. When she couldn’t see that Zachary was just using her I wanted to take her by the shoulders and shake her and shout, you are worth so much more. Then her rushed decision to go to Alaska to her grandfather, to me showed her maturing and wanting to do better for herself. After reading some of her interactions with Cooper I wanted to hug her and shout at them both for keeping secrets lol. This book does take you through a wide range of emotions. I found it difficult to put this book down and was frantically wishing for a happy ever after ending for Cooper, Harper and her family, but that wouldn’t have been realistic and this book really represents Alzheimer’s and the other issues featured accurately and in an honest, way. I think this book covered a lot of different issues really very well. There’s the dementia, the drugs, drink, peer pressure, family issues and more all dealt with so well in this book. The descriptions of the area are so good you can envision them easily. The byline, is said by the character I adored and kind of gives you a lump in your throat and then you totally understand how powerful it is within the book too.

My immediate thoughts upon finishing the book were, Wow! What an amazing read! I am not ashamed to admit this book had me sobbing for the last 2% of it. Alzheimers/Dementia is portrayed honestly, truthfully and without frills or lies. Absolutely loved the relationship between Cooper and Harper. Would love to hear from these characters again a few years on, I will certainly be adding Glen Sobey's other book, The War Blog to my Want To Read List and keeping an eye out for any more titles written by him.
As a final sum up what can I say? I highly recommend reading, No Fences in Alaska!
Just make sure you have some tissues handy!