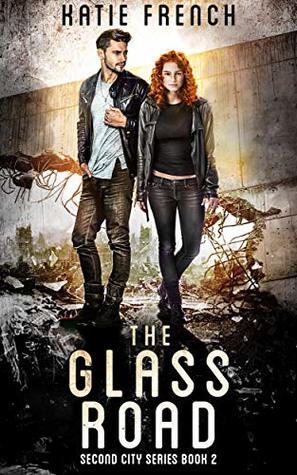 Meg is in trouble. Big trouble.

Meg, Murphy, and Hope have made it to Second City and found the renowned scientist and town leader, Fulton Tally. But, as soon as they’re inside the gates, guards descend and weapons are drawn. Meg finds herself locked up, alone and confused. And they took her favorite gun, goddamnit.
Plus, why is everyone calling her friend, Hope, by another name?
She soon learns Hope isn’t who she claimed to be. She is Gloria Young, singer and beloved celebrity of Second City who was reportedly abducted months ago. And she’s engaged to Fulton Tally, a man nearly thirty years her senior.
When she started this quest, Meg thought Tally would save her town and her sister, but Meg soon realizes Tally doesn’t care about her plight. He only cares that his fiancé is back and he will do anything in his power to keep her.
Even murder.
Tally puts Meg and Murphy to work in his factory, where they’re no better than slaves, and locks Gloria in a gilded cage. All three need to escape his oppressive reign before Tally makes his next move and puts them out of commission forever.

As soon as I finished reading The Night Road I knew Bk 2 The Glass Road was going straight onto my Must read list! The cover has a rather dilapidated, ramshackle buildings in the background with the two main characters front and center. There’s red haired Meg and Murphy the guy she met on her travels in The Night Road. I find the cover to be quite striking and I think it would catch my eye on a book store shelf. I would know by looking at the cover that it has a post apocalyptic setting and would pick the book up to read the blurb. Although the genre is listed as dystopian YA, I absolutely loved reading it and yep I am not a young adult!


This book picks right up where the first one ended with a little recap in case you have forgotten exactly where you are in the story. It’s good to have a small refresher at the very beginning. Meg still needs to find a way into Second City and give Fulton Tally the note that Trax wrote. Meg is naturally worried about how long the journey has taken to get to Second City, as she has no way of knowing if her sister Shannon is alive or not. Nor how many other residents of Shiprock have succumbed to the strange flu like virus.

Hope reveals she knows a way they can get into the city and persuade Fulton Tally to help. Hope isn’t exactly who she has been saying she is. In fact Hope isn’t even her real name. Her real name is Gloria! Gloria is engaged to Fulton Tally and she knows he will be desperate to get her back, as her presence makes him look a softer more caring leader to those that live in Second City. Sadly things do not go exactly to the plan Gloria has. In fact things go downhill rather rapidly. Gloria is taken back to her lush apartment that though it has everything she could ever need or want feels like a prison! Murphy and Meg are separated, and firstly put into cells and beaten up to keep Gloria in line. In fact Gloria going into Second City with them turned out to be a very bad decision, as Fulton Tally knows Gloria must be fond of her friends so he uses them to blackmail her into doing his bidding.

All is not lost as Gloria did have inside help to escape Second City before and those that helped are willing and able to do so once again. Meg has been put to work in a sewing factory and has to learn how to work the sewing machine pretty quickly as if you fail to sew your quota of garments you don’t get to eat. Murphy is imprisoned at the men’s factory which is putting together electrical components together. Regularly beaten Murphy is not in great shape when the time comes to follow the escape plan Gloria and her friends have put together.

We have the three main characters from the other book, Meg, Murphy and Hope/Gloria. I still liked the plucky Meg determined to do whatever is needed to obtain help for her sister and the residents of Shiprock. Murphy is still great book boyfriend material, in fact even more so in this book as he shows he would truly give his own life in the place of Meg. We do learn much more about Hope/Gloria in this book and we learn it is a large sacrifice on her part when she voluntarily returns to Second City and surrenders herself to Dr Fulton Tally. To those just looking on the surface, it would appear that Gloria has an easy life. Which compared to characters like her maid Biddy, or the women in the garment factory she does. Then you take a closer look, she has luxurious apartment, with lots of swanky gadgets, such as a tv, a food printer, and smart, lavish clothes to wear. However, she cannot come and go as she pleases. There’s the guard Dorsky on duty on the other side of her locked door. She has TV access but the news etc on it is censored and only what Fulton Tally approves of her seeing. Her only friend is Biddy. Biddy becomes a target for Fulton Tally. He knows she is dear to Gloria so threatens Biddy’s life to keep Gloria in line with what he wants. I came to adore Biddy maybe almost as much as Gloria did in the book. She is not just a maid but a mother figure, confidante and friend to Gloria.

My immediate thought upon finishing the book were that it was action packed and just when you think things are looking up for the main three characters, then some other challenge appears for them to tackle. The ending of the book leaves a great cliff-hanger and sets up Meg’s next trial. I am certainly looking forward to The Fever Road.
Posted by Jeanz xx at 03:00