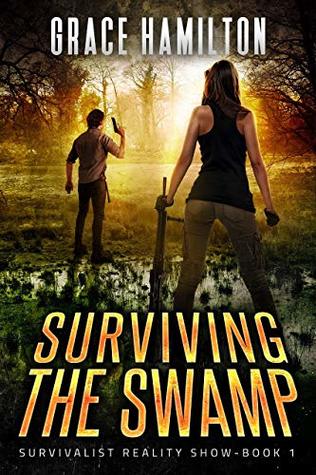 BLURB from Goodreads
Skin of Your Teeth Survival is a reality show made famous for pairing part-time survivalists with a real-life survival situation. Led by world-famous Prepper and Survivalist Wolf Henderson, season ten promises to be different: this time none of the contestants are survivalists—they’ve all been picked to fail. But when an EMP hits, the cast scatters and Wolf is left to guide a group of mis-fits in a suddenly dark and dangerous world. Wolf knows this group will be some of the first casualties if he doesn't help so he offers them safety at his island bug-out location and takes off with his ragtag team to move through the wild and unpredictable swampland of Florida. The loner of the group, Regan, only joined the reality show to escape her past life. She knows she can’t survive on her own, but connecting with others has never been her strong point. She believes she has a better shot in one of the major cities on the coast than in the swamp, so she joins the team with every intent of striking out on her own once the opportunity arises. But with the world around them growing more dangerous every day, she has to figure out whether she’s better off with the group or alone in the post-EMP world. And whether Regan or Wolf realize it, the dangerous journey through swampland will soon become a literal fight for survival once they reach the chaos of ‘civilized’ South Florida.
**This novel contains scenes with violence and referenced sexual content.**

I felt it was time to return to my favourite genre of post-apocalyptic and it happened by coincidence an author I have previously read and loved has just started releasing a new series. I decided to learn a little more about her book. When I read the series name and part of the blurb, I will be totally honest and say I was initially put off. How would the reality show elements come across? If all the contestants were picked to fail what was the point of the show? In the end I decided that the only way I would find anything out was to start reading the book. The cover has an overall apocalyptical feel. It has a background that fits the description of the swamp and surrounding area within the book. I would guess that the two figures pictured on the cover are most likely Wolf and Regan.

The book begins with Regan plodding on making slow but sure progress through the swamp to the next rendezvous point with the cast and crew of the reality show. The thing bothering Regan the most is that her feet are wet and that’s bad, very bad. The resident expert on the show, Wolf Henderson had given all the contestants a warning about foot rot, and told them all to carry spare socks with them. Unfortunately for Regan she had managed to lose her spare dry pair. Regan goes over in her head why she had thought it would be a good idea to enter this reality show. Her partner had already ditched her, and she was now all alone. Or as alone as you could be on a TV show. Regan finally comes to a point where there are three choices as to how to get to the rendezvous point. Choice one, the quickest and shortest way there was to wade through a pond area. Choice two was to head even deeper into the swamp and Choice three was a climb. It didn’t look impossible to climb, though it was quite steep. Having a partner would have made it a much easier option. Regan discovers each option has its pros and cons, she needed to just decide and get on with it! Regan manages to become stuck at around half way up, and is wondering about the chances of her injuring herself if she has to jump down. Suddenly Regan hears a voice and looks up to see another contestant, Tabitha Funelli. Tabitha helps Regan up the rest of the way and that’s when they hear an air horn sound. The two women walk into the camp to discover what is going on. Basically, there are no camera crew, in fact there was no crew about at all. Wolf, being the only expert there takes charge of the situation. It seems there has been some sort of “apocalypse” which means that they are basically on their own with no way to communicate with anyone! Wolf and some of the men discuss what could have happened. Some of the other contestants start pushing extra supplies into their own backpacks. Wolf, asks them all to slow down, and says no one should be heading off alone into the swamp, it’s too dangerous and reminds them the supplies are for everyone. One of the contestants called George spins around on Wolf and tells him his “little show is over”. George goes on to rant about not hanging around with Wolf, a Native American who is a wannabe survivalist, who thinks he knows it all. He goes on to say he knows enough and he is going home and the rest of them should be doing the same. Thankfully Wolf takes some deep breaths, he is proud of his very genuine Native American heritage and being an accomplished survivalist. Despite Wolf suggesting they all settle for the night and set out the next day George insists he is going now, and Mary goes with him! It seems everyone else is taking Wolf’s advice and everyone finds a comfy spot within the camp to sleep. The following morning as people awaken, they discover more people have left, but worse than that they have taken the majority of the supplies and anything useful with them!

All those remaining have decided to be in Wolf’s group whilst getting out of the Swamp and then reassess the situation once back in civilisation. The group consists of Wolf, Regan, Geno & Tabitha Funelli, and Fred. Despite the smaller groups impatience to set off Wolf is determined to forage for food, supplies and anything they could possibly need before actually beginning their journey out of the swamp.

My favourite characters within Surviving The Swamp are 27 year old Regan who has wasp allergies, so knows the importance of having a decent amount of epi-pens and other medical supplies on hand. The other main character I grew to like throughout the book was Native American, survival expert Wolf. He is infuriating at times with how slow he does things, and how everything has to be done his way. I can definitely imagine Wolf & Regan slipping into a relationship together, if they ever make it our of danger! I wasn’t overly keen on Lily at time she came across as a rather spoilt young girl who was more worried about her appearance than even her father’s safety. The other character I adored was Tabitha, small in stature but a big heart that she wears on her sleeve for all to see! Tabitha is a paramedic so her skill set is vital to the group. I loved how her persistence with Regan resulted in a great friendship between them both. Tabitha ending up putting her own safety on the line for others more than once, in this first instalment of the Survivalist Reality Show series.

The pace of the book is good and keeps you reading, you certainly don’t want to put it down to do anything else! So quite an addictive read. I enjoyed following the group through the different challenges they came across due to being in the swamp and their journey to Naples, as well as how their different characters had to learn to get along with each other.  I also liked the “Dear Diary” aspect of the book where Lily is chronicling what she and her grandfather are doing, and how they manage to get over to the island to await Wolf’s arrival.

To sum up I enjoyed the book, like most of the characters, though I think disliking some of the characters is a good thing too! You don’t like everyone you meet in real life so why would a book be any different! I am looking forward to reading more of the series and perhaps improving my opinion of Wolf’s daughter Lily as time goes on.