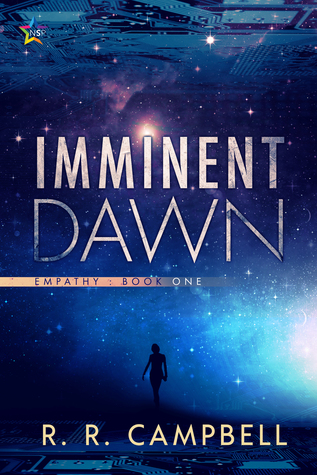 BLURB from Goodreads
Four people. One study. The internet-access brain implant to bind or destroy them all.Art-school dropout Chandra would do anything to apologize for her role in her wife’s coma—including enroll in the first round of human trials for an internet-access brain implant.At first, the secretive research compound is paradise, the perfect place to distract Chandra from her grief. But as she soon learns, the facility is more prison than resort, with its doctors, support staff, and her fellow patients all bent on hatching plots of their own, no matter how invested they might seem in helping her communicate with her wife.Making matters worse, a dark wave of uncertainty crashes down on the compound, forcing Chandra to become an unlikely but pivotal player in conspiracies stretching from the highest levels of the North American Union government to the lowest dredges of its shadowy hacking collectives.To save herself and her wife, Chandra and her newfound friends from the study will have to overcome the scheming of a ruthless tech magnate, the naïveté of an advancement-hungry administrative assistant, and the relentless pursuits of an investigative journalist, all of whom are determined to outpace the others in their own quests to resurrect lost love, cover their tracks, and uncover the truth.A twistedly delightful clockwork of intrigue and suspense, EMPATHY: Imminent Dawn is an electrifying sci-fi debut from author R. R. Campbell.


REVIEW
I love discovering Authors I haven't read before, so that's what had me taking a closer look at this title. Then when I read the blurb it made me think of Body Parts by Jessica Kepp and The Unit by Ninni Holmqvist.

The cover is appealing and eye catching enough and with the title “Imminent Dawn” and its potential meaning it made me want to pick up the book and learn more. The blurb then further sold the book to me with its Sci-Fi elements the whole humanisation of the big experiment and what it could mean for one of those taking part. It could be the only way she gets to communicate with her wife who is in a coma.

I was instantly engrossed and really enjoyed the first chapter but then irritatingly things tailed off and much slower paced and more the backstory. The whole series title EMPATHY fits extremely well. There’s a lot going on in this book. Dr Wyatt Halman is the one that is behind the whole idea of internet access brain implant. Those in Dr Wyatt’s immediate circle are his family, consisting of his children and his brother-in-law. Still Dr Wyatt hold back on some of the important experiment details. He keeps all the necessary details on paper, locked away in his safe. To which is immediate family will only gain access to upon his death.

Dr W Halman is a strange man, willing to use the brain of someone very dear to him to test his theories. Whilst reading the book I went through a lot of different feelings and thoughts on him as a character. When the reader discovers the losses in his family you feel sympathy, but then there’s all the mistakes and side effects of the trial that he is hiding.

I loved the character of Chandra, who becomes the face of Dr Wyatt Halman’s experiments. At first Chandra doesn’t care what it takes she will consent to anything for a slim chance of being able to talk to her wife once again who is in a coma. Her wife, Kyra was involved in an accident, one that Chandra ends up feeling entirely responsible for. Without giving away anything too spoilerish both Chandra and Kyra end up with their worlds turned upside down.

Another character I loved was Meredith, stuck working as a journalist at an, at best “middle of the road” newspaper. Then suddenly she starts receiving inside information about what is going on, and going wrong at the Human/Etech research compound. All workers and those taking part in the experimental research are cut off from the outside world for the duration of the experiment and they have all signed contracts to this effect. Meredith ends up not just putting her career on the line but her finances, and even her life.

My immediate thoughts upon finishing the book were that I was glad I persevered with it and read it to the end. Although at times it was a slower pace than I would have preferred, I did end up enjoying the book as a whole.


To finish up although I found this book a slower, more in depth, sci-fi read I am interested in more of the EMPATHY Series and what is still to come.