BLOG TOUR & REVIEW - WE ARE NOT OKAY BY NATÁLIA GOMES 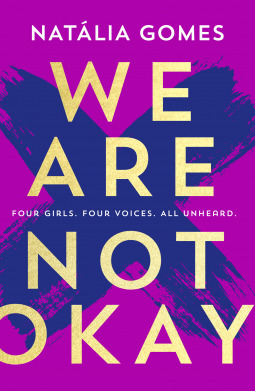 
I never used to read much from the contemporary genre whether it be YA or Adult but for some reason this book caught my eye, I read the blurb and felt I really wanted to read it.

It is a difficult book to describe and talk about without revealing too much of the plot, but I will try my best and share a little bit about each girl.
Sophia has a steady boyfriend, Steve, and is happy in their relationship but Steve wants to push things further than just kissing and touching under shirt. Sophia is managing to come up with excuses not to go any further but worries Steve will get fed up of her saying no and look elsewhere for the kind of relationship he wants. Then she wonders is she is saying no and isn’t ready, is it that Steve isn’t “the one” for her and does she just need to pluck up the courage and “do it”? To be fair Steve doesn’t push Sophia, yet at the same time wants to know if she will be saying “yes” soon or not? Sophia thinks about what she would call her own “short comings” in comparison to other girls at Birchwood High School. Sophia isn’t as fun and social as Trina, or as confident, pretty or popular as Lucy.
Lucy McNeill may appear confident but she feels different, she thinks everything seems different this year. Her dad has once again left the family home, he has another woman, in fact his girlfriend is pregnant! Lucy compares her father’s girlfriend Amber, to someone who she reminds her of from school. To Lucy people like Amber and Trina are the same, in her opinion they are sluts who steal others boyfriends/husbands. These “sluts” also wear short skirts and wear far too much make-up too. Even though Lucy thinks this way she cannot seem to be able to finish her relationship with Steve and ends up buying some lacy underwear and posing in it, then sending photos to Steve. At this stage I was "woah! alarm bells!" and "Oh you silly girl"
Trina Davis hasn’t got a very good reputation at school and Lucy blames her for “stealing” her boyfriend Rhys. Trina has been seeing Rhys during the school holidays and hopes their relationship continues, she doesn’t see what Rhys ever saw in his ex-girlfriend. Trina hates that everyone sees her as the bad person, they think she stole Rhys! Trina and Lucy used to be kind of friends, well they used to have quite a few classes together. Trina cannot understand why Lucy should have any ill feeling towards her, its not like she stole Rhys. As far as Trina knows Rhys and Lucy had finished their relationship before Rhys went out with her!
Ulana is a Muslim girl whose family is strict and all she wishes is to have some of the freedom the other girls seem to have. Ulana has a secret boyfriend, Aiden. They try to have “proper dates” but have to be extra careful not to be seen. Ulana explains to Aiden that her family would not approve purely because he is not a “good muslim boy”, they are “not the same”, they “should not mix” Then Ulana meets Aiden’s family and it seems that her family isn’t the other one with prejudices about who their child should and shouldn’t date.