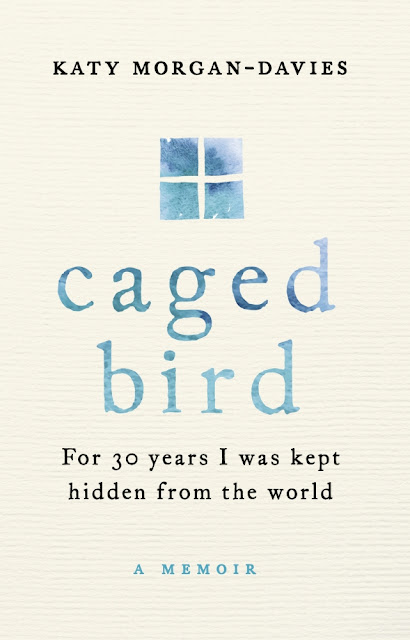 BLURB from Goodreads
'I was the shadow child no one ever saw...' From the day she was born until she escaped aged 30, Katy Morgan-Davies knew nothing but a life in captivity. Her father was the deluded and cruel leader of a cult based in South London who convinced himself that he was a god, and the immortal leader of the world.Her father's paranoia and his need to completely control those around him led to Katy being imprisoned indoors with the curtains drawn most of the time, denied any kind of love or friendship. From a young age, Katy's father subjected her to violence and mental abuse. She was not permitted contact with anyone outside the house and on the rare occasions she did have to go out, she was always chaperoned. When she did finally engineer her escape she realised just how little she knew of the world outside her front door. She had never before done the things we take for granted such as choosing what she wanted to eat from a menu or travelling by herself on public transport. Step by step, she learned the skills she needed in order to exist in a world that was completely unfamiliar to her.In this unique and powerful memoir, we see how Katy rose above what she suffered and found a way to freedom through her love of books. Reading the works of others enabled her to see her captivity for what it truly was, while writing gave her a voice when her own was silenced. Her story raises fascinating questions, such as how a child can be kept hidden from the world outside and how, in spite of years of being brainwashed, Katy still developed a clear sense of right and wrong.

REVIEW
To be 100% honest it was the title that initially drew me to this book, then the cover kind of intrigued me a little more, the blurb encouraged me to want to read the book and then when I found out this courageous woman actually lived not far from where I do. Apparently Katy Morgan-Davies lives in Leeds.

A stark white cover with just a small square window showing the outside and the blue sky. I think the cover actually depicts the title of the book brilliantly
ie, the caged bird, looking through the window, wanting to be free, wanting to escape and to be able to look through the window wishing she was a bird in that sky, free to fly wherever she wanted. I think the minimalist styling of the cover may actually drew me to the book more, as I wanted to know who was looking out of that very small window and why.

The genres listed for this book are Biographies and Memoirs and they fit very well. I think those who read

This book is the biography/memoir of Katy Morgan-Davies who was born into a rather different way of life and into and unconventional family.

First of all I should explain that Katy was not the name this brave women started out her life being called. Within the cult she grew up in she went by the name of Prem, or was referred to as "Project Prem". She then tried out a few different names mostly to fit the imaginary lives she played out in her head which for her was (I'm sure you will agree when you have read the book) the way she coped with her life. So throughout my review I refer to Project Prem/Prem/Rosie as the name she finally decided on and uses as her author name for this book, Katy.

Katy was brought up not going out to school, she was "home schooled" at home by the other members of the cult. Katy is kept in the house all the time only allowed out into the garden when it is evening when no one is around to witness it and ask questions as to who she is. This means Katy has no friends of her own age, nor does she have any contact with anyone else outside of her household at all. Katy's upbringing is what I can only describe as eccentric. Katy is deprived of any form of comfort at all. Anyone found hugging, or showing any type of affection is severely
punished. The only way to live or rather exist is by employing a life of dumb obedience. It turns out that Katy is not on any type of official list or document she really "doesn't exist" legally. Then you read the quote in the blurb and understanding dawns, that yes Katy truly was "the shadow child no one ever saw".

It is truly horrific how Katy is forced to live, no friends or family relationships of any sort. In fact her own grandparents do not know of her existence.
. . . its difficult to describe the book as it is interesting and terrible at the same time. The pace of the book is of rather slow in parts, dare I say, it does feel a little monotonous in certain sections and you think about what Katy went through on a daily basis, you ponder what on earth every day must have felt like for her. A minute must have felt like an hour, a month perhaps felt more like a year. The routine the cult kept was fastidious, every had to be done to the precise specifications of what the cult leader Bala decreed. He referred to himself as
being immortal, as being their God. After around a third of the book, I knew I absolutely had to finish the whole book, I totally had to know how everything ended for Katy. Having said that, there really were occasions I had to put the book down and take a break, what Katy goes through is not exactly light hearted easy reading. I am glad I read the whole book and I hope it is a popular book and many other people read it as Katy deserves to have her story told.

Other members of the cult have attempted escape, some were brought back and badly beaten in an attempt to bring them back into line with the teachings of their God Comrade Bala. These women are also emotionally abused, as if they do anything wrong, in act, in fact they even think of doing something wrong and Bala finds out, they are severely punished and humiliated as well as being constantly verbally abused too. The abuse does not just come from Bala but from all the other Comrades at the instruction of Bala.

Escape for anyone is difficult as when they join the cult, they give up all connection with family and friends, because of course the only people they need and who are worthy of their time are other cult members. Even so cult members are not encouraged to grow close in anyway at all to one another. The only "relationship" they are permitted to have is with Bala and that is on his terms and subject to his demands and whims. Escape or Katy is almost impossible, she doesn't know anyone at all outside the cult she exists in. She has no idea who could or would help her or even how to seek out the help she would need. Not only that, Katy is very rarely left alone. When she goes to the toilet, a comrade accompanies her and actually watches. The same when she has a bath, Katy has no privacy at all.

Katy was forced to live never really knowing about her true parentage. Its not until after her escape that she learns her father is also the head of their cult. Katy doesn't know which of the women in the house they are in is her mother and there is no mother/daughter relationship at all. the women are encouraged to tell tales of indiscretions about each other.

Sian had to be extra hard on Katy so as not to arouse suspicions of her giving Katy special treatment as she is Katy's biological mother. There is a highly emotional scene in the book when Katy is allowed to visit Comrade Sian in hospital after she has an "accident". It is Bala himself that takes Katy to the hospital, he actually explains to the hospital staff that Katy is a "family friend". It's clear Sian is seriously ill and Katy has had suspicions that she is her mother for some time. When Bala tells her it is time they left, something comes over Katy and she gathers courage, because what she is about to say will no doubt result in punishment for her. Katy turns back to Sian in the hospital bed and says goodbye to her mother. Sian replies calling Katy baby. It is then that Katy feels sure Sian truly is her mother. It is the last time Katy sees her mother as Sian dies.

I don't want to go into intricate detail about what Katy went through, how she finally escaped, who let her down and still blindly believed in the word of Bala, even campaigning Bala's innocence, despite her part in helping Katy to escape and then those whom though they managed to escape the cult when Katy was still very young, never forgot her and came forward to support her case against her biological father Bala. For all the bad Katy endures she does finally meet some lovely supportive people who play a significant part in her lie as she learns how to live independently.

As a reader this book takes you through a whole wide range of emotions. You also find yourself asking how could no one have known of this poor, innocent,child's
existence. Then you wonder how she will escape and how she can possibly build a life when she has no real-life skills. This book is so much more than what I have described and revealed within this review.