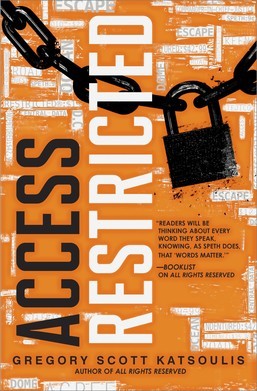 BLURB from Goodreads
At the end of All Rights Reserved, Speth and her friends freed the city of Vermaine from Silas Rog and his oppressive litigation. But now, with the Wi-Fi untethered, the citizens of her city are looking to Speth to lead them. Just as Speth never intended to lead a rebellion of Silents, she has no idea how to begin putting Vermaine back to rights. All she wants to do is break out of the dome and track down her parents, who were sold into indentured servitude years before. Leaving the care of the city in the hands of her friend and mentor, Kel, Speth and a few friends embark on a journey to explore the rest of their world and spread the cause of freedom.

This book, once again has a bold and bright cover. This time it is orange,  and has metal chain with a padlock prominent on the cover which I'd say fits with the title of the book. The chained padlock also fits in with a scene from within the book.
I think the colour will make this book cover stand out on a shelf, though I think anyone that read All Rights Reserved would be eagerly awaiting this title.
The genres I have seen listed for this book are Sci-Fi, Dystopian and YA which all fit the book well though once again I should point out that I am waaay past the YA age group and still read and loved this book.

In this book Speth and her placer friends are still causing mayhem for the powers in charge! However because Speth & friends have freed those that live under the rule of Silas Rog, the people of Onzieme still look to Speth for guidance on what to do next. It was never Speth's intention to become a replacement leader, all she wanted to do after freeing her neighbours and friends from Silas was to go find her parents, free them from their indenture and run away together somewhere and start their new life together. When Speth leaves to try to escape the dome and find her parents it is Kel that steps up and tries to help the people now they are free.

There's plenty of action from the placers, though redundant from placing items now the town has been freed they go on helping wherever they can. Some of them end up accompanying Speth when they are in a car chase, though they would have wanted to stay behind. They accept the situation  and agree to help as much as they can. Whilst Seth's unplanned car chase means she cannot go and collect her sister Saretha from the hospital, in fact Speth almost doesn't go, she finally leaves when Kel promises to watch out for her sister. Kel also tells them to make contact with Kiely, the placer who trained her, as she may be able to help them in someways.

Though Speth flees Onzieme and the dome that surrounds it there is no guarantee she will find her parents and free them. In fact she may get caught and taken back to Silas Rog or his sister, Lucretia. Lucretia seems to be obsessed with capturing Speth and not just because of what Speth has done to Silas, Lucretia's brother, it seems to be something even more personal the way Lucretia doggedly tracks and chases Speth. Speth & the group begin to realise the sign of zipped and locked lips has spread much wider than they could ever imagine. Every where they go there seems to be silents willing to help them on their way, and to intervene in the chasing and potential capturing of them.

We also learn why Indenturing is so widespread and seemingly being done more. It seems that any children that are born to parents already indentured become the property of the Rog's. So as soon as these children are old enough to walk they are put to work. Then if they have children the cycle continues over and over. In fact some of the characters liken it to slavery.

Of course I still love Speth for her determination, bravery and selfless acts of sacrifice just made me like her even more. Speth always seems to be blaming herself for things in this book. Be it for her friend and family losses to being willing to go ahead and sacrifice herself for the good and well being of others.
I also immediately took to Mira who is Margot's younger sister, and so sweet, yet sassy at the same time. Margot is also really protective over Mira so it's quite funny when she tells Mira off for things. The amusing thing is Mira usually gets her own way anyhow.
I also had a new favourite smaller character who I instantly liked despite her surname being Rog was Victoria, who was a younger, affluent, sheltered character became so brave and became defiant as well as supporting the underdogs in the book.
The two characters I loved disliking were Silas and Lucretia Rog, the way they offer a "fair" trial and it turns out the unbiased judge is someone who turns out to be much closer to the case which would make them truly biased before any statements have been made. I loved the way Silas and Lucretia thought they could win no matter what evidence was available against them. If they dislike something they just change the parameters of the law within their dome.

We catch up with a lot of the characters from All Rights Reserved in this book, as well as meeting new characters such as the family of those who chose to commit suicide and/or family of those that have recently been indentured. Speth is a little shocked that most of these people seem to support her rather than blame her for their family members death such as Beecher's father, Mr Randall and Mrs Croate (Sera's mother).

So I feel I really don't want to say any more as I always try not to give away spoilers. There is happiness in this book as well as sadness when we lose well liked characters. . . and I totally didn't see one of the losses coming at all.
I just want to add that I loved the way the names/titles of each chapter had their cost for saying them eg, "Out Of The Dome: $8.96", "Into The Fire: $9.97" and "Keene: $10.99".

My immediate thoughts upon finishing reading this book were, "Wow amazing!"
I can definitely say Access Restricted is as good as All Rights Reserved. I would highly recommend reading this book series. It has an amazing plot, a well created dystopian society and is a fantastic read! When I finished reading All Rights Reserved I felt I wanted to shout about how great it was from the rooftops, well Access Restricted left me feeling the same way!