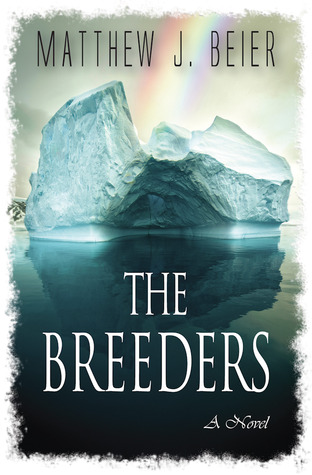 BLURB from Goodreads
The storm has come. The homosexuals, once an ostracized social minority, have taken over the world. They understood the dangers of an overpopulated planet, usurped government power, and created a culture of perfectly engineered families. But Grace Jarvis and Dex Wheelock are heterosexuals--part of the government’s highly controlled backup plan for reproduction--and they have a problem:Grace is pregnant. Dex is the father. It is a crime that has only one consequence: banishment to the Antarctic Sanctuary, an isolated biological reserve where reproductive criminals are allowed to exist in peace, without disrupting the rest of civilization. Yet there are rumors that genocide has already begun and that the homosexuals are finally setting natural breeders on a path to extinction. This leaves Grace and Dex with only two choices: to succumb to the tyrannical regime, or run.They choose to run.Matthew Beier’s debut novel tells the intimate story of two people bound by the force of life itself as they set out to protect their unborn child and find value for themselves in a world that has rendered them worthless. This rainbow-tinted reflection of our own society--part political satire and part dystopian thriller--is a novel you won’t want to miss.

REVIEW
I couldn't believe I had missed out on reading this one when I saw it's publishing date! The cover features a large iceberg and a rainbow over it. Upon reading the book I came to the conclusion that this could be Sanctuary, the place people are sent if they disobey the governments laws. The cover certainly attracted my eyes and then when I read the Blurb I knew I just had to read this book!

The genres listed for this book are LGBTQIA and Literary Fiction though  personally I would also add Dystopian and Futuristic as it has an “alternative” society controlled by what most would label as an unconventional government with their new laws.

The world is now ruled by the majority of the population which are homosexual. As the world was becoming rapidly over populated those in charge decree that there should be no more “natural” pregnancies. The government are increasingly going down the route of engineered families that they perceive as being perfect. Though they have the engineering expertise they also have a back up plan of men and women (hetrosexuals) who can be controlled, conceive and produce offspring in a constrained environment. However should anyone become pregnant naturally, the guilty pair are banished to a place called Sanctuary, located in the Antarctica, which is an extremely harsh place. Those sent to Sanctuary live a hard life as a punishment. The ”back up” individuals are referred to as Failsafes (men) and Carriers (women).

The book is told from two main points of view. Dex Wheelock, a fail safe with two mothers as parents, who had what he thought could have been the beginnings of a meaningful relationship with a carrier called Diana. Things had been going really well, then one day she just disappeared into thin air. No matter how he tried he could not find out where she had gone. Dex’s friend invites him to a party to distract him from losing Diana. Dex is attracted to a woman called Grace and they end up having sex that evening.

The other point of view is from the perspective of Grace Jarvis, a carrier, with two fathers who finds herself pregnant after what she considered a one night stand at a party. The pregnancy leaves Grace with a very difficult decision to make. Though Grace initially attempts to hide her pregnancy, this is not something that she can do for long. The pregnancy literally tears her family apart. Dividing her parents and family who have shockingly differing opinions on her pregnancy. Dex and Grace meet up again and discuss their options which come down to just two options, to being inevitably found out as Grace’s pregnancy goes further along and being banished to Sanctuary, or to run! There is a rumour of a resistance that can help people in their situation. Neither of them want to leave their families behind but they have no choice. To begin with Dex is determined to support Grace and their baby but at a crucial moment he gets cold feet leaving Grace in the hands of the resistance alone. Whilst being on the run with the resistance Grace is becomes unsure about the resistance and their true objectives but what choice does she really have but to continue on the path she is on. There is no option for her to turn back and she is even told she would not be allowed to leave as she had seen and heard too much of the resistance secrets and locations to be allowed to escape alive!

I of course really liked the main characters of Dex and Grace. Dex seems to have been quite spoilt by his two mothers. We see Grace’s family split with her father ?? being disgusted with her pregnancy and literally turning his back on her not wanting any part in her life or his grand-child’s.  Luckily Grace has the unlimited love, moral and financial support of her dad Stuart.

This book is really action packed and had me hooked within reading the first 10%. There is a lot going on, the pregnancy just seems to be the “thing” that triggers some of the changes. The Breeders is full of family woes, disagreement and darkness as the truth of how quickly some of the characters discard friends/family in trouble. Then uplifting when complete strangers risk their lives to help to people that they have only just met.

I guess some people will find the book controversial, with the switch of power being in the hands of homosexuals rather than heterosexual. The head of the government is referred to as Queen Vincent and he wants to eradicate heterosexuals. The book turns the majorities on their head, having what we would still think of minorities leading the way. I found the book engrossing and intriguing. For those possibly put off by other reviews I would want to remind everyone that this is fiction and that I find reading a way to escape my everyday real life.

I definitely enjoyed reading this book with its complex society and it intricately woven plot. I loved that things were revealed to us as Grace was learning about them too. The book was both an enjoyable read and a very thought provoking one too. I’d say this book is a great conversation starter. The book tips the prejudice that homosexuals receive on its head telling the story where they are in charge and it is the heterosexuals that are the harassed minority.