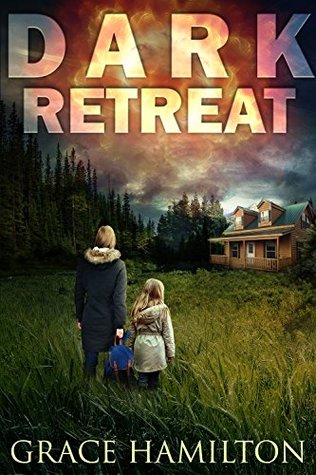 BLURB from Goodreads
Three months after life as she knows it was decimated, Megan Wolford has only one goal: protect her daughter, Caitlin, at any cost. When a mysterious illness strikes Caitlin down, Megan is forced to forage for medical supplies at a remote lodge. The last thing she wants is help from her fellow survivors when so many in her life have let her down—but soon she'll find herself with no other option.   Ex-Navy SEAL Wyatt Morris is doing everything he can to hold his family together after the tragic death of his prepper Dad, so when Megan enters their lands, he is mistrustful at first despite feeling drawn to her. He won't turn away an ill child though--no matter how deadly the world has become. But the arrival of another stranger named Kyle soon gives them all a new reason to be suspicious. Wyatt knows he’ll have to forge alliances in order to keep his family safe, but trusting the wrong person could be a deadly mistake.   When Megan and Wyatt discover her daughter’s illness may be linked to Kyle’s arrival, it sets off a race to discover the truth before it’s too late to save Caitlin—and the rest of the Morris clan. Can they work together for survival . . . and something more?


I had been reading a lot of newly released/about to be released titles and decided it was about time I read something that had been released for some time.
I was also in the mood for something Post Apocalyptic and really loved the sound of this one.

The cover certainly gives a bleak impression of the world the two females are living in. It also makes you want to know more about them and the lodge/cabin they are facing. Is it a place of safety or are they heading into danger? Only one way to find out, I think this book is a good choice for me after looking at the cover and the blurb certainly clinches it for me, its a must read book for me!

The genres I have seen listed or this book are as listed above, Sci-Fi, Fantasy, Outdoors & Nature and Post Apocalyptic which are all great descriptors and clues to what the book contains. The only other genre I would possibly add is Survival though I guess that should/could fall under Post-Apocalyptic. I was a little unsure I would class this as outdoor & nature as I would think a book given that genre would be a purely factual one, but on the other there are a lot of tips on survival, such as herb knowledge, snaring & trapping and security etc included within this book which could be applied in the real world we live in.

Solar flares are fairly common, though the ones that plunge the world right back into the dark ages were really massive ones. There had been some warnings given out, though Megan hadn't heard o seen any of them. The only reason Megan learns anything about these warnings is when she goes out to the local store to pick up her usual bread and milk and finds that the store shelves are completely empty!

Caitlin is usually a very bubbly, full of energy child but suddenly within just 24 hours she has become a weak and lifeless. Megan knows she needs to find help for her daughter and fast. Megan realises she can't be walking the city streets that are now full of looters. Poor Megan finds herself in an awful predicament, she desperately needs to find something or someone to help Caitlin. She cannot be seen on the streets looking weak herself with Cailtin as that would make her more of a target to have what little they have stolen or taken from her by force. Yet it certainly isn't safe to leave Caitlin alone whilst she searches for help. Eventually Megan realises she has to move when everything is quieter, less people about and hopefully less threats to their safety around.  So as Megan is struggling to carry her young daughter, Caitlin she is looking for shelter, food and some sort medical help. A Lodge style cabin catches her eye in the distance. Though she worries if she can trudge that far whilst still holding her daughter. The sight of the cabin gives her renewed energy to push on despite the pain and lethargy she is feeling. She wonders if the Lodge is empty, or maybe it will have people with some knowledge to help her with her increasingly sick daughter Caitlin. Megan briefly puts Caitlin down by a nearby tree whilst she checks out the cabin. When Megan discovers the cabin doesn't appear to be in current use she relaxes somewhat and put Caitlin on one of the beds and decides to just rest awhile then start foraging for food and further supplies that may be of use to them. However she is so tired she falls asleep curled round her daughter.

It's there that Wyatt Morris and his clan of survivors find her. Naturally its a shock for both Megan and the Morris Clan when they meet. There's lots of distrust on both sides. Albert makes his feelings crystal clear he doesn't like Megan and Caitlin and he doesn't want them here any longer than is absolutely necessary.

The Morris clan have survived by working together and not trusting outsiders. So it with quite a leap of faith when they accept Megan and her sick daughter Caitlin. The head of the clan is Rosie, she is the one with the knowledge of old remedies and herbs and there uses, her eldest son Wyatt immediately asks her to take a look at the ill Caitlin.

It is Rosie head of the Morris clan that takes control of the situation and immediately sets to work to find something within her known family remedies and herbal knowledge to help the youngster.

Once the furore has settled it is decided that Megan and Caitlin should stay until Caitlin is well enough to walk again. Megan makes it clear she doesn't want charity and she is more than willing to join in the hunting, trapping, cleaning and meal making or whatever is necessary. Though Caitlin isn't getting any worse she isn't getting any better either. Megan has agreed to stay but is always planning on where she will go and what she wants for her and Caitlin in the future. Wyatt would be much happier if Megan would just agreed to stay with them permanently. Wyatt is attracted to Megan and really hopes she will stay with them.

Everyone falls into some sort of routine until Kyle Grice appears, claiming to be a vet. Normally Wyatt would just speak to him and then part ways. It's the fact the man claims he has some sort of medical knowledge that makes Wyatt invite him to stay for the night. Once again Albert immediately distrusts Kyle saying there is something not right about him. When Chase also voices his concerns about the newcomer Wyatt makes sure they keep a closer eye on him.

Great world building. Real survival knowledge within, brilliant instantly and easily adorable characters. The detailed descriptions of surroundings was really good too. They helped you visualise what was in the

I loved hating the bad guy Kyle Grice, he really is an awful man who will stop at nothing to get to the top of the pile, therefore being in authority and having others do his dirty work. At the moment he is on the rough climb to the position at the top that he so desires. He doesn't care whom he hurts or kills on his way either.

My immediate thoughts upon finishing the book were that it was a great read! Definitely eager to read much more of this series. Already grown fond and become attached to lots of the characters within the book.

I ended up totally adoring the characters in this book, so looking forward to reading more. I certainly have high expectations for the rest of the series after reading book one! This book and it's brilliant characters made me think of the great series called The End Of All Things by Lissa Bryan which I loved.