REVIEW - FLIGHT OF A STARLING BY LISA HEATHFIELD 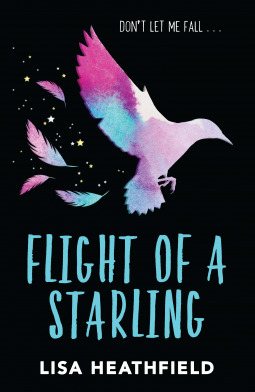 BLURB from Goodreads
Rita and Lo, sisters and best friends, have spent their lives on the wing – flying through the air in their trapeze act, never staying in one place for long. Behind the greasepaint and the glitter, they know that the true magic is the family they travel with.Until Lo meets a boy. Suddenly, she wants nothing more than to stay still. And as secrets start to tear apart the close-knit circus community, how far will Lo go to keep her feet on the ground?

REVIEW
As I had read Seed and Paper Butterflies both by Lisa Heathfield and loved both books this one quickly made it to my "Must Read" List! Also as I had recently read Spectacle by Rachel Vincent which had a "circus theme" to it I fancied reading something else with a similar theme. The blurb also mentioned the trapeze which was always my favourite act to watch at a circus both as a child and as an adult taking my daughter to the circus too.

I love the cover! The stark black background, the type you would see inside a big top at a circus when looking up at a trapeze act, then the byline "Don't let me fall..." that fits the trapeze, circus theme but also fits various other places within the book too. The brightly coloured starling on the cover represents the trapeze act within the book and the fact they too fly through the air and wear brightly coloured costumes with feathers. There are also the feathers being shed from the starling which mix in with the stars and stardust on the cover. I think this cover represents the trapeze family within this book perfectly. I also think the shedding feathers could well represent those that leave the circus such as main character Lo's Gran, Margaret. I certainly think this cover will attract the eye and attention when it's on a bookstore shelf. What more can I say this cover is perfection!

The main character in this book is Laura, or Lo as everyone call's her, she is part of a group that travels with her family and another couple of families and form a circus. Sadly the circus is not what it used to be, less and less people are being born into the circus and staying in it. In fact this circus is in danger of extinction itself. The main character Lo, seems to long for the life of a flattie. A flattie is someone not in/from a circus. So when Lo meets a flattie called Dean she is as curious about his life, as he is about her life in the circus.
It begins with harmless flirting when a group of the circus teens go to explore the town they are about to set up in. The book concentrates on Lo and Dean, their differences in lifestyle and the fact that they both yearn for something different, and better. Dean lives with his mother who holds down two jobs and they still struggle to make ends meet. Dean is trying to learn a trade, one that he really isn't interested in, that would bring in money for him and his mother quicker and on a more regular basis. Lo's father and most of the circus people have a strong dislike and weariness around flatties, so Lo ends up sneaking around to meet Dean.
When Lo's Da finds out she is seeing a flattie he demands she stops. Lo has become too attached to Dean now and it's like an addiction, she has to see him no matter the cost, no matter what she is neglecting to go see him. Lo's parents have always presumed that their daughter would marry Spider, the fire-breathing son of one of the other families that make up the circus. They have also presumed that their other daughter Rita would marry one of the circus performers called Ash. Rita seemed fairly happy with the arrangement until she develops a crush on Rob, the mechanic who does motorbike tricks with them. Rob was once a flattie but he was allowed to join them as he proved himself doing the motorbike tricks and the amount of ideas he had for further tricks. Lo neither likes nor dislikes him to begin with but later in the book she changes her mind when she sees how he watches her mother and when Spider peeks into Robs home then shows Lo, saying he thinks Rob has a woman with him. When Lo looks in she sees her mother.
Despite being ordered to end whatever relationship it is she has with Dean, and everyone thinking once the circus moved to a different place it would be the end anyway. The relationship continues with Dean using his mother's car to get to the new places the circus is at. It's at one of the new places that Lo also sees her mother and Rob on the beach, but cannot say anything about it as she has sneaked out to see Dean after being warned not to. That is the same day that Grands has a fall and is injured making Lo both angry at her Ma, as is she had been where she should have been she would have heard Grands and then he wouldn't have lain on the floor so long. Lo also feels a little guilty that she wasn't about to help Grands too, due to her seeing Dean. So Lo is carrying a lot of information around with her, confusion about her mother and Rob, as well as about her mother and father. Everything is almost revealed when Rita declares her love for Rob. Their Da goes round to Rob's home and drags him back to his home demanding to know what is going on. Lo sees the guilty looks between Ma and Rob but says nothing. Rob turns everything round onto Rita making out she is a silly little girl with a crush, that he had tried to tell her he wasn't interested but she hadn't listened.
With so much whirling round in Lo's head she makes a catastrophic decision. . . which she later regrets so much. In fact all the sacrifices the circus performing families have made may no longer save the circus as they wonder if it's worth continuing their lifestyle.

The book is written from the differing points of view of Rita and Lo. You can actually feel the different personalities within their own chapters too. It is a rather sad story really, all the things the circus performers give up to keep their show and way of life alive when in reality it is a way of life that is slowly dying. Within the book you see how prejudiced people can be. At one point a young teen boy calling Lo and her family "pikeys" and suggesting they are unclean and are all thieves. On the other hand, the travelling circus performers dislike "flatties" living in one place, coming to the circus demanding more and more dangerous stunts to keep their trade.

My thoughts throughout reading this book, were that it was an emotional and poignant read. You agonize along with Lo wanting to see Dean even though she knows it is a forbidden. She also tortures herself with the two images she has of Rob and her mother together. Also as a reader you have to feel some frustration at Lo and some of the hasty decisions she makes. I wanted to hug Grands, I think if Lo had talked more openly with him, maybe she wouldn't have made such a life changing decision. It shows up the difference in culture and knowledge when the circus people come into contact with medical flatties whom they think can fix anything and everything, almost like magic.
I also loved the characters of Lo & Rita, they were close sisters who told each other almost everything. In fact it is Rita that Lo finally confesses what she has done that will change all their lives. I seriously wanted to shake Lo & Rita's mother and scream at her asking how long she truly thought she could keep such a secret amongst people that live so close to each other. It wasn't really a case of who found out first, more a question of when! I felt like punching Rob. Rob who is a flattie pretending to have circus in his blood.....who in my opinion didn't really care about the circus ways of life, he just wanted the adrenaline that the roar of the crowd made when he came up with more dangerous stunts and they watched them in awe. Why did he have to join the circus and what on earth did he think would be the result of his "meetings" with Liz. Surely he also would know it was only a matter of when the secret came out. I enjoyed disliking Rob as a character, he played with Rita's emotions, and was doing something that would impact and possibly break the circus he professed to love to tiny pieces.

My actual first thoughts upon finishing the book were that the book was certainly thought provoking, sad yet uplifting, full of emotions and loss.
Once again I will be on the look out for any other titles by this author. I love her style of writing along with the real life issues she weaves in her slightly more unusual plots. You'll understand what I mean if you read more than one of her books. I highly recommend you read them all.