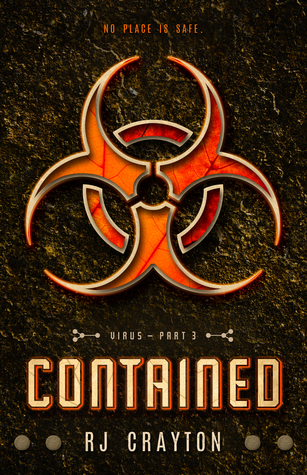 BLURB from Goodreads
Elaan, Lijah and Josh are starting to think that perhaps no place is safe.As they're forced to leave the one place they thought was safe, they find old friends in new places. Just as they think things are finally coming under control, shifts happen.In this exciting final book, our leads search for the solutions that have evaded them thus far, in hopes of reaching a happy ending for themselves and the world in peril.

REVIEW
As I revealed at the end of my review of Exposed, I started reading this book straight away! I have really felt hooked all the way through these books. I'll be sad to come to the end of the last book.

The cover of this book looks quite stone like which does fit one of the settings in the book really well. The symbol appears once again, this time a brighter orange shade, does that indicate a possible vaccine or even a cure? The byline on this cover says "No place is safe" which again fits this book very well on more than one occasion.

In this book the teens are once again reunited and are with the person/woman their father sent them too, but once again they are being hunted down. What they had thought would be a safe place has once again been discovered. So now there is the person who their dad sent them to, a teenage friend the person has made called Amadu. It's the university that Amadu would have attended that they make for. The person/woman thinks she may have discovered the final missing element that James and Kingston have been missing in their efforts at making a vaccine. Before approaching the University they set up "camp" at the home of one of Amadu's tutors. Then go to the University. . . sadly someone seems to have pre-empted their journey and they soon find themselves captured. The person/woman soon reveals they have been caught by an old boyfriend of hers that still seems to be very obsessive over her. Can they use it to their advantage. Will Alex, the man in charge, be persuaded to allow them to hide in his underground complex or will he just hand them over to the government.

Sadly the immune Elaan and Josh (who on paper is logged as an immune due to false paperwork been done by Dr Kingston Wells) end up being sent to the Virginian complex that is under the direct rule of President Thoreaux. It is Thoreaux great plan to kill off any people that are carriers of the virus. Thoreaux wants a perfect, elite race. Hence the author comparing President Thoreaux to Dr Mengele. Thoreaux has a breeding plan which involves him wanting to "love" match immunes, then have them marry and reproduce. Eventually creating a healthy population. Which possibly may sound a good idea to some. One of the other things Thoreaux wants to implement is his very own version of religion too.
Once again it is Dr James Woodson trying to manouvre test results so that Elaan and Josh are "matched". It is Dr Kingston Wells that has this weird hate for Elaan. We never find out why he dislikes her so much. Unless it is that he thinks his son better, or a higher class person to Elaan. Dr Woodson's plan is scuppered but is soon back on track. If Elaan and Josh do escape the complex in Virginia it will be down to Elaan's father and not Josh's!

Whilst all this is going on for Elaan and Josh, Elijah is still trapped with the very woman his father sent them to thinking she could keep them safe. They are both still in the underground complex at the mercy of Alex. Alex's only weakness seems to be that he professes love for the woman he loved and lost all those years ago. Will that give her enough power over Alex to keep herself and Elijah free. It seems at one point she will not be able to keep Elijah safe when Alex has him locked up in quarantine. Will Alex send Elijah to be killed? Just when you think all is lost both the "woman" and Elijah get help from an unexpected source.

The author has written the characters so well that you can visualise them and you genuinely care about them. Even when Elijah is being obstinate, and not liking the person his father has sent him, Josh and Elaan to for safety. You can see the situation from both points of view. It's difficult to say much more about this book or series without spoiling the reading experience. I have honestly been hooked all the way through the whole series. I've loved both the pace and amount of action in this book. RJ Crayton created great characters such as the teenagers Elaan, Elijah, Josh, and Amadu. She also formed some brilliant adult characters, that you liked/loved and disliked/hated, such as liking Dr James Woodson and Nina (the generals wife). I enjoyed disliking Dr Kingston Wells and Alex, and of course hating President Thoreaux and his experimental basement. In fact there was a very relevant and realistic comparison of President Thoreaux (in the book) to Dr Mengele (who worked for Hitler and was a very real, destructive, twisted scientist that ordered, and took part in some horrific experiments). I could go on and on about this book, but as I've said I don't want to reveal spoilers that should be revealed slowly within the context of you reading the book/series.

So what was I thinking immediately upon finishing this book . . . Well my very first thought was when can I read the next one! Then realised this book was the, last, book! I honestly really, really, enjoyed reading this book, lots of edge of the seat moments. I guess you could look at the fact I still have a few questions about the characters within the book as the series ending badly as it was left 'unfinished' not 'totally resolved' but my opinion is I look on the fact I have a few questions still unanswered as the authors way of letting the individual reader come to their own conclusions.
In fact I thoroughly enjoyed the whole series. So much so I'd love there to be a spin off from this series, or an add on novella maybe to catch up with some of the characters of this series.
There is one thing for sure, I will be taking a close look at the other titles RJ Crayton has written and most likely adding most of them to my "must buy" list as well as my "must read" list.