REVIEW - AMONG THE MONSTERS - PREQUEL TO THE HUMAN WILDERNESS - NEW AMERICA TRILOGY BY S.H. LIVERNOIS

Part psychological thriller, part soft horror, with a touch of near-future science fiction and the supernatural,
Among the Monsters is a prequel to the novel The Human Wilderness,
the first installment of the New America Trilogy. 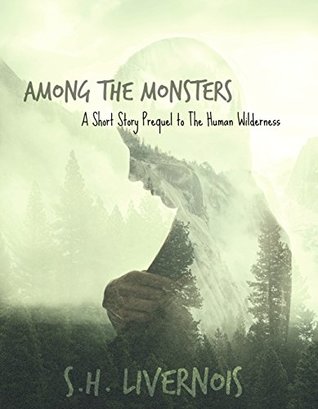 BLURB from Goodreads
"You're going to save us all." The apocalypse stole everything from Rebecca. Normal life. Her friends and family. Her sense of belonging. Now, she lives with a handful of fellow survivors — mere strangers — eking out a meager, dystopian life behind steel walls. The only other people on Earth are mutated humans, living like a horde of animals in the wilderness beyond. Some people call them zombies, but the name doesn't quite fit. These monsters are much more enigmatic and terrifying than that. Then one day, Rebecca's life changes when a kindly old woman emerges from the wilderness with amazing yet impossible news: Her little brother and sister survived the plague that destroyed the world. Three years ago, a mystery epidemic brought humanity to its knees, and the collapse of civilization followed. Her family's survival through that unspeakable horror never crossed Rebecca's mind. Will she really see them again? It's what she's longed for: a normal life, friendly faces, the comfort of family. During the harrowing journey that follows, Rebecca uncovers a harsh truth about post-apocalyptic society, its survivors, and the disturbing conspiracy that links them all. Even more surprising is the role she may play in their plans.

REVIEW
I had originally about to read The Human Wilderness, and within the very first pages it is stated there is a prequel novel available. So I went on amazon to find it and it was free!

The cover is a pale faded green which represents the post apocalyptic genre of the book well. The world has become a wilderness as you can see on the cover, trees and weeds and grasses have become overgrown. My favourite aspect of the book cover is the faded silhouette of a young girl/woman on it which makes total sense when you read the novella.

The genre labels on Goodreads for this prequel are Horror and Zombies, but in my opinion you could easily add it to Post Apocalyptic. I'd also say the prequel has hints at dystopian elements to come later in the series.

The "normal" world has ended, those that have survived being infected and turned into parasites are living in small settlements fortified with anything they could find strong enough to keep the parasites out. These walls/fences are also patrolled as the parasites are continually attempting to get inside the settlements to the human survivors within.

The main characters featured in this novella are sisters Rebecca aged 10, and Abby aged 6.
The two girls are at the grandparents playing out, whilst keeping away from their grandparents hostile neighbours. Abby has spotted some kittens under the neighbours home and nags and nags until Rebecca "rescues" them for her to play with. Rebecca braves the neighbours wrath and crawls in amongst the dirt and spiders to reach the kittens. Its an indication how seriously Rebecca takes looking after her sister and trying to give her things she'd like.

We then skip forward in time to Rebecca who is now alone, it's been a long time since Rebecca lost her family so when a woman called Martha tells them they are alive and she can take them to them, of course the girls go willingly.
It's a decision that she will come to regret quite quickly. It seems Martha is collecting girls from the different settlements and taking them to an apparently amazing place and to "the saviour".

I have read The Human Wilderness now too and would say I was glad I read this prequel as the characters from this novella are referenced in the first book. I think reading the novella before or after book one would work. I enjoyed the prequel as we got some background of the area and type conditions would be in the rest of the series.

My immediate thoughts when finishing this novella was to start reading The Human Wilderness as soon as possible. So I ended up reading a couple of chapters straight away.