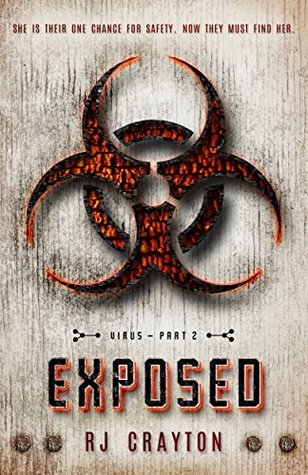 BLURB from Goodreads
The safety of the underground bunker is left behind. Elaan and her friends are out in the open, exposed to the world above. Exposed to a world that has been ravished by the virus. Can they make it to the one person they've been told can provide them safety?

REVIEW
After finishing Contained I needed to know more! The cliffhanger situation book one had left my favourite teen characters in, had me starting book two Exposed straight away!

The cover of Exposed gives the impression of a situation  that has become even worse than in Contained. It's a grey/white background with the same symbol on the front cover. This time the colour of symbol is a more orangey red. As the title suggests that the virus is worsening and maybe means more people have been or are being Exposed to the virus and its mutation. The byline is, "She is their one chance for safety. Now they must find her." Again this really works well as a teaser for the book.

Elaan has given Elijah the letter his father wrote him, and then finds one of her own. The siblings read their own letters and then swap over to read each others, which is a good job as the information they need is spread between the letters as an extra security measure. I love the fact that their father James knows his daughter Elaan so well he knows she will want to keep what may be the last letter/communication she ever has with her father. So her father has done a small letter on a separate sheet that she can keep and gives instructions to destroy the information letters.
The teens check exactly what is contained in their backpacks as secretly as possible in front of Boxcar Willie, who wants payment for getting them through the checkpoints. Boxcar Willie has already suggested that he "have a couple of nights" with Elaan as payment. Naturally both her brother and boyfriend are dead set against this. Though Elaan actually quietly considers it if it is their only chance for escape.
The teens have learnt that cash is almost worthless, the currency is jewellery and items that can be bartered for other things. Elijah and Elaan find the special coins their parents bought them every year for their birthdays, whereas Josh has cash, and lots of it! Elijah splits their "currency" three ways, though always takes the smaller cut, be it in the valauble coins of the cash. Determined to be fair with Josh and wanted to make sure his sister has every chance possible.

So as the blurb already tells you, Elaan, Josh and Lijah are out of the supposed safety of the Scientist Protection site underground. they are above ground attempting to follow a hastily drawn map that will take them to the last person they thought they would be seeking out for a chance at a place of safety. Elijah has shown the map to Joshua as he has a photographic memory, then given the map to Elaan and at her suggestion drawn a rough map outline for himself in the event they get separated. Elijah has also made Josh promise to take care of Elaan and make sure they follow the map to the person their father is sending them to.
So I want to explain a little about the character but obviously want to leave most of the surprises intact for you to unlock yourselves as you go through the series. What I can tell you about the person who represents safety is that they are female and is related to the man called Mark Dayton who initially, unknowingly brought the virus to America. This means his sister is a "carrier". She is relatively safe so long as she doesn't come into contact with the Helnona virus as if she does she will then become a carrier and spread the virus.

As Elijah predicted the three teens do get split up. Josh and Elaan are together and Elijah, the eldest of the three on his own. Elijah knows in his heart he can count of Josh getting Elaan to safety or doing everything possible to keep her safe. Elaan is naturally worried about her elder brother, and wants to wait around or search around for him but Josh insists that Elijah would want them to continue with their plan, and that Elijah will either catch up with them or meet them at their destination.

Elaan and Josh walk and make "camp"  where ever they can find a safe place. They eventually come across a tandem. Though the tandem is a great find, when Elaan finds it's previous owners it turns into a horrifying find too! The tandem certainly cuts time off their journey much quicker than walking until they end up with a puncture. It's then they meet another person who they later find out is distantly part of the Dayton family. The name that no one utters or wishes to be associated with, as to be related means an immediate death sentence. The man they meet is called Lee, he stops to help as Elaan reminds him of his own daughter that he has sadly lost contact with due to the outbreak and progression of the virus.

I really loved the character of Lee, the way despite the chance that Josh and Elaan may have the virus or want to rob him, he still stops and offers his help. Of course after the incident with Boxcar-Willie both teens are a little skeptical about what this strange man may want in return from them. When the teens go with Lee to his home, they see evidence themselves that in fact Elaan does look remarkably like his daughter, though that fact both puts them at ease whilst making them a little edgy at the same time.

Whilst all the above has been happening to Elaan and Josh, Elijah has been having a dilemma of his own. Should he do as he promised his sister and make his way to the destination their father wishes them to go and stay at. To be honest Elijah had only ever intended to take Elaan there and then go his own way alone, but now he is alone already maybe he doesn't need to even see the woman their father was sending him to. He is sure that Josh is has the same chances of getting Elaan to safety as he would have. Maybe he could just go it alone now. Then Lijah thinks about his little sister Elaan, what would she want him to do? She'd want to see him and make sure he was safe after the way they were separated. Finally he decides he needs to check Elaan is safe, let her know he is fine and then he can go off alone and do whatever he wants.

Elaan and Josh can't believe how deserted everywhere is until they hear a rumour that the government may have purposely sent out military personnel virus carriers out to spread even more death and destruction.

Again I was hooked to this book from the first word to the very last one! And yep I was so engrossed in the plot and the author had made me feel so connected to it's characters that had to immediately begin reading the final installment in the Virus Series!
The book is from either Elaan's point of view or later in the book we have chapters from the points of view of both Josh and Elijah. I love the sibling relationship between Elaan and Elijah, they clearly love each other over anything and anyone else, and yes, they may have their differences such as the fact whether or not Elaan should be going into a relationship with Josh but when needed they are there and are prepared to do whatever is necessary for each others safety.

I've probably rattled on enough but I always like to share my immediate thoughts on finishing the book, though I have had to edit out anything spoilery this time! So here's the questions and thoughts running through my mind as I finished Exposed:
There's so much more to be unraveled.....as well as learning what is now going on at the scientist protection complex now the teens have escaped? Did the General ever return? How have those inside survived with no food deliveries from 'up top'? Have Dr James Woodson and Dr Kingston Wells made a vaccine yet? Or maybe made a cure for the infected? Are the government still after Elijah, Elaan and Josh? or do the three teens have bigger problems with the rumours of military personnel being made into carriers and being sent out into what is left of an already dying world?
And yes! I did begin reading Contained straight away, highly addictive series!