REVIEW - THE PURSUAL - THE NOME CHRONICLES BY F.F. JOHN 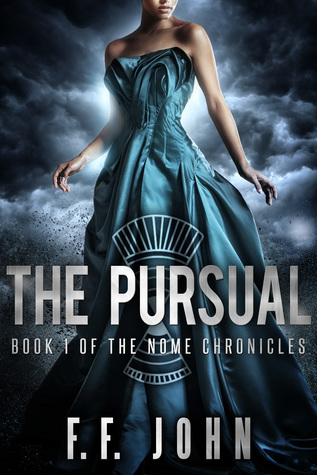 BLURB from Goodreads
Neith and Invier are madly in love, yet destined for an unhappy ever after.Invier's family is too lowly-ranked for a union with Neith, so she, unwilling to accept a loveless union with someone else, revives a long-abandoned competition called the Pursual. In the Pursual, the prize is the girl and an alliance with her influential family.Entered into the competition without his consent, Invier becomes suspicious of Neith's motives. Still, he must win, or see his love married to a rival. The mysterious deaths of competitors, the discovery of dark secrets, and a growing rebellion mean that nothing will come easy.The competition meant to bring them together threatens to tear the couple apart. Yet only by working together will they overcome their rivals and gain a life with each other.

REVIEW
As soon as I had finished reading The Proem, (which is the prequel to this series), I felt compelled to read more. I felt I had to learn more about the society and characters I had just met. So approaching this book I had high expectations for it.

I like the title, it's straight to the point and certainly fits the book well when you read the definition of the word. The blurb lets you know that this book contains a competition so you have a strong hint of what is to come.

This cover still made me think of The Selection Series by Kiera Cass, The Lone City Series by Amy Ewing and The Perfected Series by Kate Jarvik Birch. The cover has a dark blue shade in the background, where it was purple on The Proem cover. The dark blue makes me think of a stormy sky so does that represent the mood of this book? A troubled competition, or trouble for one or more of the characters maybe. The female body I'd say it is Nieth, is wearing beautiful blue coloured, and very expensive looking dress or gown. The cover once again features the family insignia of the Reffour household. I have to say I'd want to take this book with such an attractive cover from a store shelf to learn more about it.

Though I more than likely covered some of the society information in my previous review of The Proem, I'll go ahead and re-explain it as understanding the hierachy within this dystopian civilisation. Those highest in society are part of the "Top Twenty" Nomes, they own the businesses are "the haves") that run the country and employ those from the lower classes. Then there's the "Sixty" that have what I would describe as "white collar" jobs or jobs where they don't get their hands dirty! ("the have some money") Then there's the Lesser Lands where those that provide the physical labour, and lowest in the hierachy live - ("the have nots"). Within each "class" there is also a "pecking order". In terms of pairing you are expected to marry within three or four levels within your own class. Which means Neith should be paired within the "Top Twenty" Nomes, which at first makes you think it's not a problem she can marry Invier as his family are in the "Top Twenty" but his family is too low in the "Top Twenty" they are only just holding on to their rank at 20. That is the reason that Neith researches the history of the tradition of having a "Pursual". In it's oldest sense it meant suitors fighting and competing with each other to gain the right to be paired with the Scion or Scioness whose family has organised the "Pursual". There was a lot of violence, bloody battles and deaths in those old fashioned Pursuals. The more modern take on the Pursual means that there will be no fights to the death and all challenges are within a specialist simulator. There will also space for an audience to sit and watch what goes on in the simulator. Every competitor will have an equal chance of winning. Though after the first challenge, the winner of that one will be given extra points. Meaning the winner of the first challenge will get a large headstart! The person that wins is the one that has the most points at the end of the competition. It is he/she that will then be named Paladin.
Naturally with most things celebrated in the upper classes of this society, there is a special party to announce the competitors. Naturally the celebrations, as always are sorted out by Master Portan. He also educates Nieth on the etiquette of a modern Pursual, and what will be expected of her and the competitiors. In this book you have a closer look at the relationship between Master Portan and Neith Reffour. Master Portan has a lot of jobs to do, including educating Neith, being an advisor to the Nome of Reffour. Master Portan acts as the compere to the ceremony of the names of the Pursual competitors being read out. There's a slight murmur of shock when he reads out the name of Scioness Adela Seltan and varying levels of applause and cheers for the following names Scion James Saint Espirit, Scion Loic Carre, Scion Erhart Vesta, Scion Ika Ateguns, Scion Seth Talum, Scion Mehrdad Cyra. . . . the Scion Invier Floran's name is called his families faces are a picture of shock whilst Invier's face is also tinged with horror! Neither Invier nor his family had put his name forward as a competitor, so how did his name end up being called out? To back out now would be devastating for his family. Though the fall out from such a decision wouldn't bother Invier or probably his father, it would undoubtedly upset his mother and it would serious damage his sister, Song's pairing prospects.
To say the competition gets out of hand is an understatement really, as in there are some kind of related deaths, but I'm not going to tell you anything about that! Only that it truly is edge of the seat reading! Everything seems to be going the way Neith would like when suddenly the Nome of Reffour comes under attack, from so called "friendly Nomes"!!

A character within this book that became a favourite for me, was Master Portan who shows he truly loves Neith and is totally loyal to the Reffour Nome. We do glimpse inside the bond shared between Master Portan and Neith portrays him as a surrogate father figure who finds it particularly difficult to deprive Nieth of anything if its within his power to fix or provide her wishes he will, and he does prove that in this book on more than one occasion. I felt like we saw a different side to Neith in this book. and is was a less flattering side. She came across selfish more than once, in fact her best friend Bel calls her out on it too. I liked that we learnt more about Belema Mazon and what profession her family do. The ending was certainly different and I wasn't expecting that. Though the ending hints at much much more to come in the next books & novella's which are on my "must read" list already!

The writing style of this book is the same as for the novella, different chapters are told from the different points of view of certain characters such as Neith, Bel and Invier. I didn't think it was possible but I loved this book even more than the prior novella. I am eagerly awaiting the next installment.

My final thoughts as I finished the book were "wow, action packed, full of twists and turns. Looking forward to reading more of this series..".