REVIEW - THE PROEM - THE NOME CHRONICLES BY F.F. JOHN 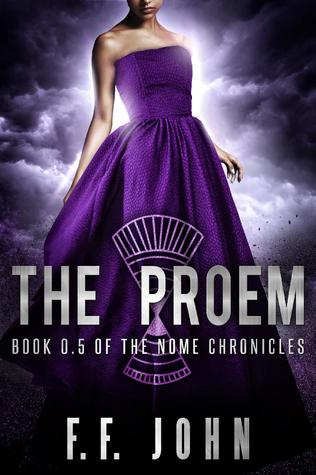 BLURB from Goodreads
Falling in love is dangerous in a world where power and profit are key. It's the 25th century and the wrong partner can prove disastrous. Neith has always known her future partner must come from a family whose wealth and position would benefit to her powerful family. That is, until she meets Invier. The moment he expresses his desire for a future together, Neith's world turns upside down and she has a change of heart. Invier's family lacks the necessary standing and although their feelings for each other are strong, a relationship won't be an easy feat. Neith's father and society would crush the prospect of a forever. Rivals would interpret an partnership with a family of such low-standing as an opportunity to crush Neith's family.Can Neith and Invier find a way to be together? Can they overcome the expectations and personal concerns poised to keep them apart?

REVIEW
The first thing that drew me to the book was the title, then I read the blurb and I knew I had to read this book. The cover instantly made me think of The Selection Series by Kiera Cass, The Lone City Series by Amy Ewing and The Perfected Series by Kate Jarvik Birch. The cover has a bluey, purple shade background and there is a female body wearing a beautiful purple coloured dress that in the book, the main character's call the colour, boysenberry.
The cover also features the family insignia of the Reffour household. I think the cover would certainly stand out on a bookstore shelf.

I'll start by explaining the society a little. As usual there is the scenario "haves" and "have nots". The main character in the book is from the well off, "top twenty" Nomes which are the elite "houses/families".  It's not all perfect within the top twenty Nomes, as you are expected to behave in a certain way. Within the Nomes and families there are certain statuses. Such as the most important person is the head of a family, if male he is called a Titan, if a woman she is called Titane. Next is a Scion or Scioness which are the first born child of the Titan & Titane, their heir. Any children after the Scion & Scioness are referred to as Doge & Dogennes. Once a female reaches 17 years old she is expected to have a "pairing" which I'd explain as being like an engagement. Though a Pairing can be broken it usually results in a marriage. It is very important to marry well. If from the top twenty, you are expected to marry someone who is only one or two tiers below your family, but the ideal pairing and marriage is to marry up the tiers. In following this etiquette, the individuals are making the top Nomes and their businesses even stronger. To marry below yourself is considered a very bad/wrong pairing then marriage is to risk being shunned which means not being invited to events and even worse people not wanting to do business with you.
The next in the "pecking order" are "the sixty" or the "lower class houses" they also have the Scion/Scioness etc and live similarly to the top twenty but are considered not as well off or as of much of a high standard. The group called "the sixty" provides what I would describe as white collar workers to the businesses of the "Top Twenty".
Both the "Top Twenty" and "The Sixty" have a lot of technology, such as robots to do their bidding and clean up or drones that take messages to people as well as having a comms system that from the description in the book resembles a watch that you talk into.
If you belong to neither the "top twenty" or "the sixty" then you are in the "Lesser Lands", these people provide the workers for the physical jobs.

The main character Neith Reffour the only child, so Scioness of the Reffour House which is in 2nd place in the top twenty. Though Neith doesn't have a sister she has a very close friend who is the same age. The Reffour and Mezan houses and families are very close. In fact so close that Tari Mezan was going to hand over her youngest daughter Bel over to Neith's mother to bring them up as sisters. Sadly Neith's mum died, so Neith was left alone living with her father Nabor Reffour, but is extremely close and seems to look towards Tari Mezan as a mother figure, and certainly treats Bel as a best friend and sister. In fact the whole Mezan family class Neith as part of their family too.

It's whilst shopping for the perfect match shoes to a new dress that she has bought for a pairing party. Naturally she has asked Bel's advice on the colour and she has been instructed the exact shade she needs is called boysenberry. It's whilst shopping that Neith bumps into a young man who immediately catches her eye. They talk briefly and Neith is smitten with the good looking and politely spoken male. She learns his name in Invier when his mother calls out to him in the shoe store, but just as he asks her name his mother announces she is going to another store.

Neith, her father and the whole Mezan family also attend the pairing party of Scioness Enyama Damil and Doge Lance Singer. Neith and Bel are gossiping about the absence of Adaora Opitz, and Neith insists of attempting to coerce more information from the younger sister Madina Opitz.

So my favourite character is as it should be the main character Neith. Neith is into history, and comes up with the idea of wanting a Pursual rather than the more popular pairing. Though I have to admit as the saying goes "the juries still out" on Invier, there just seems to be an edge about, maybe a defiance. Is he going to hurt Neith? Because if he does he will have the Mezan boys after him! Both Priye and Dan Mezan seem very protective over Neith as they are about their blood sister Bel. I actually wonder if there is going to be a twist in the whole Neith pairing/persual and could she end up in a marriage with one of the Mezan males to further cement the relationship both personal and business between the families? Or due to her determination to have a Persual could come to regret her decision and end up paired with a male from the Lesser Lands!!

I didn't put this novella down until I finished it. I was totally engrossed in the hierachy of the society and its etiquette. The society reminded me of the circles from Amy Ewing's Lone City Series. Though in this book people reproduce themselves rather than having surrogates like the Lone City Series. I certainly think if you read any of the following books then this will be for you, The Lone City Series by Amy Ewing, The Selection Series by Kiera Cass, The Perfected Series by Kate Jarvik Birch and finally The Registry by Shannon Stoker. It's difficult to explain as it is an original plot it just has the feel of the other series I have mentioned.

My thoughts upon finishing the book were: loving the intricacies of this society, and all its rules and tradition. Already adore the main characters of Neith and Bel. I'm still wary of Invier, I'm not sure I trust him with Neith's heart. Very much looking forward to reading more of this series.