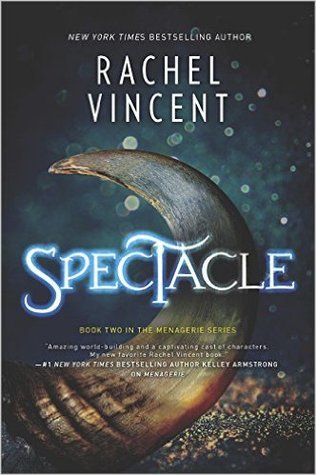 BLURB from Goodreads
When their coup of Metzger's Menagerie is discovered, Delilah and her fellow cryptids find their newly won freedom brutally stripped away as they are sold into The Savage Spectacle, a private collection of "exotic wildlife." Specializing in ruthless cryptid cage matches, safari-style creature hunts and living party favors, the Spectacle's owner, Willem Vandekamp, caters to the forbidden fetishes of the wealthy and powerful. At the Spectacle, any wish can be granted—for the right price.
But Vandekamp's closely guarded client list isn't the only secret being kept at the Spectacle. Beneath the beauty and brutality of life in the collection lie much darker truths, and no one is more determined than Delilah to strip the masks from the human monsters and drag all dark things into the light.

REVIEW
I was really looking forward to reading this one. I loved Menagerie and can't wait to catch up with all the characters and to meet more Cryptids, as well as wanting to see if the general population can at some point in Spectacle, come to accept the Cryptids.

At the very beginning the book starts with a young nine year old girl called Tabitha, following her parents to the barn to see what the noise is about. There she see's Isabelle whom she has come to think of as a sister as she writhes on the barn floor giving birth.....but giving birth to what? Well we don't really find out in Spectacle but we do learn that Isabelle is a Cryptid that originally lived with her Cryptid family on land neighbouring. When Cryptids were being rounded up Isabelle's father begged Tabitha's parents to take in their daughter and hide her. Finally it is Tabitha's father that agrees to take the young Isabelle in and even comes up with the solution to dying the young Cryptid's green hair a colour that would make her appear human. When in later years it becomes more and more difficult to hide Isabelle's true nature, she is kept hidden at home in relative safety.

Then after that mysterious scene we quickly pick up the story of Metzger's Menagerie almost where the last book left off. The Cryptids than can pass for human are able to walk around freely at all times. The more unusual Cryptids are kept in their "cages" that have been made as comfortable as Delilah & Gallagher can make them until all the humans have left the Menagerie grounds and then they are given as much freedom as possible. So life for the vast majority of the Cryptids at Metzger's have improved. Money is very tight, in fact with implementing as many improvements as they can and feeding everyone they are only just breaking even.

The evening everything changes had gone just like all the others, other than a strange looking man in the audience, who seems to have attended on his own which is quite unusual, as most people come in couples or a group of friends. Suddenly Delilah and the majority of the other Cryptids find themselves once again caged like animals! Apparently the fact that Metzger is no longer in charge has reached another well known Cryptid collector, Willem Vandekamp!

We learn a little about Willem Vandekamp via the letters between Willem's mother, Judith and her estranged sister Barbara. Willem Vandekamp left school as valedictorian, then gained a full scholarship and attended Colorado college to study cryptobiology and became, Dr Willem Vandekamp, owner of the Savage Spectacle. His very own collection of Cryptids, which he "rents out" to those that can afford to have their curiosities quenched. He also puts on shows and events in his large home.

So Willem Vandekamp has decided he wants these Cryptids for his own collection and he basically goes into the grounds where Metzger's Menagerie has just finished it's show for the night and takes them by force. There are no laws in place to protect the Cryptids, just investigations and legislation against the Cryptids, more or less allowing humans all the rights and the Cryptids none. We read about these laws, investigations etc within the book through little newspaper clippings/reports. As Willem and his men (or more like soldiers) that he employs to capture and transport the cryptids at Metzgers Menageries. Anyone that resists capture is tranquilised. As Willem has friends in high places the human workers of the Menagerie are arrested so out of the way as Willem's staff take the Cryptids. So now the Cryptids are to be part of Willem Vandekamp's collection that is named the Savage Spectacle. Though the Savage Spectacle employees seem somewhat more respectful than the old ones that worked at Metzger's before Delilah took over they aren't revealing any information to their captives. Adrian Woodgrow introduces himself as the gamekeeper and advises the Cryptids to cooperate as punishment is swift and harsh. To begin with the Cryptids are kept in small holding cells then one by one all examined and given the same standard clothes to wear. All the Cryptids are also fitted with a collar that Willem Vandekamp invented. The collars are the thing that Vandekamp and the Savage Spectacle employees control the Cryptids with. The metal collars can limit where they can walk, hence the female Cryptids are kept in a dormitory along with some of Vandekamps existing species. If a Cryptid tries to go through into an area they are not allowed in they are shocked via the metal collar. The collars also enable Vandekamp and his men to prevent the Cryptids talking about certain subjects or even just stop them talking at all, at their whim. The Cryptids are basically used and abused for the richer people's amusement. From curious people wanting a closer look at Cryptids, to bloodthirsty people wanting to watch Cryptids fight in a sand pit ring to the death! When Cryptids become older and not so pretty to look at, or fit enough to fight in the ring, then they are put into the woods for organised hunts. The hunts have three stages and consist of two people that have paid for the chance to hunt Cryptids. There are three levels of the hunt. In Stage One the cryptids are hunted by two people that have tasers as their weapon. Stage Two the hunters have long bows and Stage Three, the hunters have guns. I suppose it's Willem Vandekamp's skewed view of survival of the fittest. If the Cryptids think Willem is bad, his wife Tabitha is even worse!! I have to admit to wondering if its just coincidence Willem's wife is called Tabitha? Or could she possibly be the Tabitha from the flashback at the very beginning of the book?
Naturally the Cryptids are horrified but are not in a position to do anything about it, other than endure it until they can gather enough information and Delilah and Gallagher can come up with a plan.

Vandekamp is initially at a loss as to what Delilah is, having taken blood tests  and them coming back "human". Delilah begins by keeping what she has learnt to herself thinking she is safer if Vandekamp doesn't know. Later she uses her knowledge as a bartering item to get to see a newly captured Gallagher. Vandekamp uses the cryptids emotions and their caring nature to get them to do what he wants. For example to force Gallagher to fight, he threatens Delilah time and time again.

There are occasions where Delilah's furiae takes over and deals out the justice. I don't want to go into great detail as I think you need to read about the occasions within the context and order of the story. What I will say is that the saying "an eye for an eye" is very fitting for the type and style of justice that Delilah deals out. I think Vandekamp is equally frustrated yet annoyed that by threatening those she cares about he can dominate Delilah, but finds it impossible to command Delilah's inner furiae. Delilah attempts to explain to the Vandekamps that she has no say of when the furiae awakens or what punishment it deals out to those that have angered it.

Then the Vandekamps allow something so awful to be done to Delilah that she begs the help of the Cryptids that can bury memories, to make her forget. Though she later changes her mind and has to face what Tabitha Vandkamp has also done to her. Will the result be what she hopes with all her heart for? Will she survive long enough to find out?

I think both Willem and Tabitha look down on the Cryptids as a much lower species and because of this attitude they really end up underestimating them. Maybe individually there is nothing they can do. But each Cryptid doing their part collecting information and then a fluke situation occurs that presents the ideal "now or never" chance to escape. Of course the workers at the Savage Spectacle try to get the Cryptids back under control, but the sheer amount of them and the fact they are working together makes that a very hard task.

My immediate thoughts on finishing reading this book were, well initially stunned, then wow! What a brilliant book, full of explosive action. I would have read the next book straight away, had I had it! What more can I say? I loved it! Thankyou Rachel Vincent for a fantastic read. I can't wait for the next book!!