Monster Island is a Young Adult serial mystery thriller
where the pages practically turn themselves. Readers who like LOST, Maze Runner,
and Miss Peregrine's Home for Peculiar Children will devour this action-packed tale.
Parts 1-5 are included in this complete omnibus.
For more information, please visit katiefrenchbooks.com. 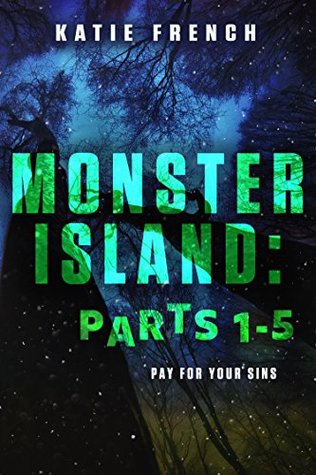 BLURB from Goodreads
My name is Lucca DiVitas. I woke up in a burlap sack to the sound of screaming. There's a note in my pocket that says, "Pay For Your Sins." The cages are empty. The howls are real. They're coming.

REVIEW
I freely admit that I don’t normally read this genre, but as I have read other titles by this author and loved them so much I decided to give this book a go.

The cover for the omnibus edition has tall trees, a forest with a dark background to represent the night. So not a place you’d like to be in the dark. The title is in a bright green, so you’ll see this one on the bookshelf, and you really don’t want to miss this one!

I think the specified genres of YA, mystery, thriller are still right but personally I feel it also has a bit of a dystopian, and horror edge to it aswell, maybe thats just me or because I have read other books by Katie French that are dystopian. I'll be interested to read what other readers would say on this.

When you start reading this book you are pulled straight in, and held there until the last word on the last page. I hated having to put the book down to do other things and would have loved to have had the time to sit and read it all the way through.
The book is from the point of view of the teenage characters within the book. I thought the way the author builds the tension slowly is really great, it keeps you on the edge of your seat and guessing along with the characters themselves. I was pleased by the fact that as a reader we only know what the teens know, so we are as puzzled as them as to where they are and why they are there. I liked how both Lucca and Kat try to think if they have done anything bad enough to warrant them being kidnapped from their homes and dumped in this isolated, potentially dangerous place that shows no signs of civilisation. In fact I was curious as to what anyone could do to warrant the punishment or revenge of being put on such a dangerous, horror filled place, let alone what teenagers could have done.
The teens do discover what I would describe as cryptic sayings or quotes in the same handwriting as the note Lucca found in his pocket such as “If you poison us do we not die? And if you wrong us, shall we not REVENGE?” Kat instantly recognises it, not that it really reveals anything to the two teens.
The two teens don’t get off to an easy start with Kat thinking Lucca is going to attack her. Both of them are scared, they don’t know where they are, or how they got there either. As he looks back up from his pocket he sees Kat has suddenly stopped and is transfixed by something in the distance. Lucca follows her gaze and sees what she is staring at. There are eight large cages, the metal doors to them are wide open. The two teens discuss what could have been in the cages and where it or they could be now. Worried about being out in the open they notice a cinder block building and head towards that hoping for some way to contact someone, anyone that can help them solve this unsettling position they both find themselves in.
I really loved the astrological desriptions revealed in a scene between Kat, Jos and their Nana before they were taken. Kat is a cancerian, which means though she can be moody and emotional, she is also very caring and is usually the one to fix things. Where as Joslyn is a scorpion, known to be hot headed and having a temper.
I also identified with the solution and action Kat takes against a boy who has been bullying Joslyn, she certainly teaches him a lesson, though she also gives herself a rather nasty scare in the process. Kat comes across as really brave and in control the way Kat is prepared to face anything from a twelve year old boy who is bullying her sister to a large squid, monster wolf/bears and the sadistic people who have kidnapped them and placed them on this island of horrors! She would do anything for her younger sister.

I grew quite fond of both of the main characters Lucca and Kat they both seem like normal individuals. Neither of them comes from an especially wealthy family, so I guessed that they hadn't been kidnapped for ransom money.

I'd have to say from the first book Lucca has been the character that has been my ultimate favourite! He continues to be a strong character throughout the whole book, and still exhibits a fierce protectiveness towards Kat and also her younger sister Joslyn whom he has only known since they met on this awful island.
The character that probably shocked me and I would have to say was my least favourite teen character, was Jade. We don't really know why she is like she is towards the other teenagers. Jade is a character that puts herself and her own safety first. The reason she was on the Island was not really fully disclosed, neither was her father’s demise, and reasons for it.
The other character that works so well, that you have to have some level of dislike or maybe hate for is Vito, Lucca's father. Vito is easily led, in financial trouble so easily blackmailed and made to toe the line by the person controlling the Island and its horrific experiments. Sadly Lucca learns a lot of un-savoury things about his father, but being the forgiving young man that he is doesn't shun his father when he has more than one opportunity to do so, even though he continually lets his son down. Though I suppose some readers may think Vito manages to redeem himself by making the ultimate sacrifice.

Monster Island will keep you glued to your seat wanting to read through the whole of this book! You will not want to put it down. I didn't. After all the suspense, building up gradually from the very beginning of the section of the book title Taken, right up until the final section titled An Inch Of Light. Finally some “light” is shed on who is behind the teenagers being kidnapped and why they were taken in the first place. We find out whose idea it was to kidnap the children and take them to "Monster Island" and why “they” did it. I was so shocked as to who had kidnapped Lucca though, I hadn't really contemplated that it could be who it turns out to have done the actual deed!
The very existence of the Island and what scientific experiments have taken place there is quite shocking! We do meet more of the adults towards the end of the omnibus, but to be honest I think it is the teenagers all the way through this series that have behaved in a more adult way, than the actual adult characters themselves!

The ending is good, I'm not sure it was how I saw it all ending. There is also the addition of an Epilogue which was interesting to read, but I also felt I wanted updates on all the teenagers, and the adults that featured too. For me things were not explained enough about Jade. . . mind you could that mean there is more to come? Has the horrifying person at the helm of everything that was happening and being created at the Island really been stopped. . . . could that person have escaped or maybe that person had other colleagues/investors/friends who will want to continue the experiments? Having mentioned those questions, it is also feasible that the book just ended with the epilogue which gives the series a fairly good ending.

QUOTES ABOUT THE BOOK

"I've read Katie French books before, and this isn't my first in this YA genre, but this is outstanding in its readability. Just can't wait to get my eyes on episodes 3-5. Superb. Great read and highly recommended." "What else can I say about this series other than I am enthusiastically, though a little impatiently awaiting more! I certainly recommend this series so far!"