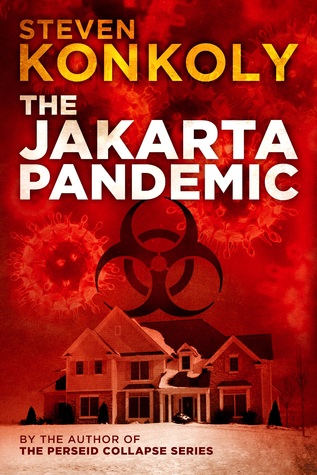 BLURB from Goodreads
The People's Republic of China announces strict travel restrictions...  Indonesia goes dark...  Cases of an uncategorized influenza virus appear in major cities around the globe...  Department of Health and Human Services officials claim that measures have been taken to safeguard the American public... Most ignore the warnings...  Alex Fletcher, Iraq War veteran, has read the signs for years. A seasoned sales representative for Biosphere Pharmaceuticals, he understands the unique dangers of a pandemic flu and has taken the necessary steps to prepare. With his family and home mobilized to endure an extended period of seclusion, Alex thinks he's ready for the pandemic. He's not even close.  The lethal H16N1 virus rapidly spreads across the nation, stretching the fragile bonds of society to the breaking point. Schools close, grocery stores empty, fuel deliveries stop, hospitals start turning away the sick...riots engulf the cities.  As hostility and mistrust engulfs his idyllic Maine neighborhood, Alex quickly realizes that the H16N1 virus will be the least of his problems.

REVIEW
I had purchased an ecopy of this one sometime ago from amazon when it was on sale a while ago so it had been sitting on my kindle/tablet waiting for me to get around to reading it.
I had recently read a couple of books from a contemporary genre and was missing the post apocalyptic genre.

The cover is bright red, which certanily catches your attention and also suits the fact that the book deals with an infection. The red colour could also be to depict the anger, and bloodshed as both are covered in this book. I'd say the house on the cover is the house that belongs to the Fletcher family, which represents a place of safety, and that they have to guard to keep safe too.

I was pulled into the book immediately, and felt compelled to continue reading it to the last page. So there's a new virus that seems to be spreading quickly, but it's in China and Indonesia so nothing to worry about yet. It's not long before all that changes when the virus hits in America and "normal" life soon drastically changes for the families living in the Durham Road Neighbourhood. The central family in the book is the Fletchers which consist of father Alex, mother Kate, son Ryan and daughter Emma.
Alex works for Biosphere a drug company and has samples of anti viral medication that could help those with this new virus. Biosphere wants Alex and all the other representatives to bring their samples to be re-distributed and sold to another company. Alex knows this virus is on the increase so gives his remaining stock to a Dr he knows. Alex has also kept and collected medication samples over the years so has his own small supply in his basement, where he also has other supplies such as food, fuel and water should an event like this, or a storm that would result in them holing up in their home occur.
Alex has also tried to help the other residents in Durham road and his own and his wife's extended family advice of such an event happening. As the virus spreads Alex attempts to help people suggesting they stock up on food etc. Soon Alex immediate boss asks where the anti viral samples are, and Alex has to resign. Alex had an idea this would happen but it means he can stay home as the situation develops, ensuring his family is safe, has supplies to survive when they have to totally cut off from the rest of the world and to keep himself and his family isolated from others that may either have the "Jakarta Flu" or be carrying the virus and being contagious.
The neighbour's on Durham Road soon fall into sections, those who are prepared and have supplies and are determined to limit human interaction. In comparison to those who make rotas for childminding and think they have plenty of time to get food etc, that the government should sort everything out for them.
Alex readily admits to having some anti viral medication and gives what he can to the appointed "Durham Road Group Leader" so she can give them out as and when people need them. Things turn nasty at a neighbourhood meeting when some of the less organised men suggest that they take an inventory of everyone's food supplies so that they can be shared out equally amongst everyone, starting at the Fletcher House! Naturally Alex doesn't want this. . .I mean who would. You have worked hard and paid for the few supplies you have and its not a never ending supply. You have collected these items that are majorly important to your families survival.
Alex Fletcher and his wife Kate have many difficult decisions ahead. The community does have a few residents who pull together to try their best to protect each other and the neighbours around them. It soon becomes apparent that things are so bad in certain areas that those who live there are moving towards Maine . . . and Durham Road is one of the places that these people are looking around to move in.
Alex and Ed try to somehow vet those that come onto the estate in their usually supply filled vehicles. They have come to a conclusion that they cannot keep these people out of the empty houses so it would be better to help these refugees move into the vacant homes. Alex and Ed direct one such couple to a home nearby, and it turns out to be a life saving decision, as the couple have medical supplies and experience to go with them.
Sadly they cannot keep the "riff raff" element out that want to take what little supplies Durham Road have. One of the neighbours who suggested taking Alex supplies and splitting them called Todd, takes it upon himself to direct anyone and everyone that knocks on his door over to the Fletcher home. One family or group of travellers look like instant trouble. Alex a former marine has seen these sort of people before and knows that there is no reasoning with these types. Even if he could spare a little of the food they have it would never be enough, these people (whom he nicknames the "Mansons") would be back for more and more until everything the Fletchers had would be gone.
It soon becomes apparent that Alex and his neighbours Ed and Charlie (whom Alex had initially thought would be a nuisance and was "gun happy") are prepared to back each other up and "do what needs to be done" to protect their homes and families.
Even though Alex has planned extensively it becomes apparent sticking to those plans may be much harder than he had thought. Alex marine instincts kick in and his wife jokes with him saying he is enjoying all the covert operations watching the "new neighbours" that have just moved in. It is soon proven that Alex first impression of the "manson family" was correct and maybe he should have gone with the knee jerk reaction he felt when first confronted with the head of their family and his shotgun! The lead Manson then openly threatens Alex and his family. Thats when Alex realises his first thoughts were right and there would be no reasoning with this group of people the only thing they understood was violence. So how far are Alex and Charlie prepared to go? They both wonder if they could kill to protect their families.

My favourite characters were Alex and Charlie. Alex the ex marine, prepared for almost anything and prepared to use whatever he has or can find to defend his family and their home. Alex does try to shelter his two children Ryan and Emma from the harsh realities, but for family safety has to share his thoughts with his wife Kate. The first impression we the reader get of Charlie is that he is perhaps "all mouth and no action" but when things get dangerous he turns out to be invaluable, and plays an active part, along with Alex in ridding the neigbourhood of imminent danger. Even the quieter character of Ed becomes involved in the Manson/Fletcher feud!
Obviously the characters I hated the most were the "Mansons" that drove into the area after stealing someone else's car, and think they can literally knock on a door and be provided with anything and everything they need. They honestly see nothing wrong in taking vital supplies from others. Though I suppose I should also mention Todd, the Durham Road resident that wanted to commandeer the Fletchers provisions, and when that doesnt work, he foolishly tells the new rough "Manson family" about it all. I'd like to think he was way too naive telling the Mansons about the Fletchers food etc as if it is not naivete the conclusion I come to is that Todd vindictively told the Mansons about the Fletchers in the hope when they confronted them he would get some of the supplies for himself and his family. Basically Todd lit the kindling and stood back to watch the fire. I mean things could have gone really badly, ending up with the Fletchers being killed or thrown out of their own home with nothing.

I really enjoyed the book from beginning to end. I'd love to read more about the Fletcher family and their neighbours, so I hope to read more of the Perseid series. I'd say if you love the post apocalyptic genre, then you need to read this one for sure! I enjoyed the writing style that kept me hooked, and on the edge of my seat throughout the book. You really could envision Alex setting up wood with cans standing on top of them as early warning systems for people breaking into his home. I will also be taking a look at the other books/series written by this author too.

My immediate thoughts upon finishing this book were, brilliant book, nail biting, edge of the seat reading and highly addictive too. When can I read more!
I found this book to be a very thought provoking throughout, you do find yourself thinking what would I have done, as well as at times wanting to shout at Alex no don't do that! don't say that! Then at other times I guess I became a little over safety conscious along with Kate Fletcher and must say when first confronted by the "Manson family my instinct matched Kate's of just shoot them now!