REVIEW - THE GIRL IN THE CITY - LEAH KING BY PHILIP HARRIS 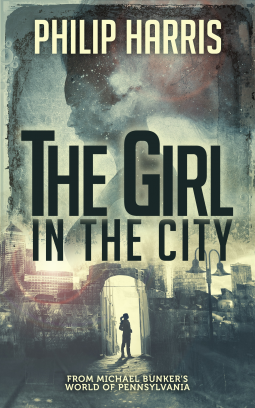 Title: The Girl In the City
Series: This is a novella set in the world of Michael Bunker's Pennsylvania
Author: Phillip Harris
Genre: Post Apocalyptic, Dystopian
Release Date: 2nd February 2015

BLURB from Goodreads
With the oppressive Transport Authority controlling every aspect of their existence, Leah and her father do what they can to carve a good life for themselves. Leah spends her nights scavenging in the rural zone around the City, risking capture by the Wild Ones as she hunts for salvage her father can trade for food and other essentials. But when Leah takes a bag of salvage from a dying stranger, she and her father are drawn into the world of Transport and its war against the terrorist organization, TRACE. A war that could cost them both their lives.

INITIAL THOUGHTS
I was struggling reading another book when I cam across this one. I needed something to lift me from my "possible reading slump" so I reverted to something from both genres I love, post apocalyptic & dystopian. As this is set in the world of Michael Bunker's Pennsylvania I am hoping I may have discovered a great new series to read.

THOUGHTS WHILST READING
There weren't any really as it was a fairly quick read novella.

REVIEW
I received an e-arc copy of this book from Netgalley in exchange for my honest review. I then looked the title up on Amazon so I could add the links to this review post and discovered I had actually bought this novella in December 2015! So it's been sat waiting for me to get around to reading it! I wish there were more reading hours in the day, or even an extra day in the week just for reading! I could use either the extra hours or both the extra hours and the extra day!!
The cover has a green hue to it which adds a feeling of darkness and the possibility of possible danger. You later realise it could represent one the latter scenes in the novella. There are two depictions of the same female on the cover, in the top section is a profile silhouette within smoke . . .and there is also a female figure in a street scene. I think the cover represents the novella very well. I should also add that there is a different cover shown on Goodreads for this book. Which one do I prefer? The one I have featured above as it suits the feel, genre, and plot of the book much better.Would the cover make me pick this book up from the shelf in a bookstore? I think I would pick it up to read the blurb due to the curiosity the cover makes me feel  about the female on it.
So because I didn't really read that this book was based on another authors books, I initially expected this to be a prequel to a series. . .I know my bad . .should have read the description better. The book starts with the main female character of Leah out on a salvage scouting mission for salvage as that is the currency that is used to barter with for food etc. as the "city" is in ruins really and is being governed by the harsh regime of the "Transport Police" who seem to literally make up their own rules on what is right and wrong. These "mission" of searching for salvage are becoming increasingly difficult as the good salvage has already been taken and those that live outside the city and are referred to as the "Wild Ones" . There are many rumours about the Wild One such as they capture people, torture, and murder them. The most gruesome fact or rumour is that the Wild Ones are cannibals! So it's understandable that Leah should be scared of them and ends up losing a whole nights salvage to escape them. Salvage that was to be bartered for food.
It's a chance meeting in an alleyway that ends up drastically changing her life. M man is being chased and is shot and the last thing he does is hand Leah a bag with a mysterious package. Initially Leah thinks the contents of the bag will be something she can barter for food. . . but when she shows her father, it becomes apparent it is something of a much higher value.
There's plenty of twists and turns within this novella. I found it quite a gripping read. The whole post apocalyptic part of the world that those in the city and surrounding are having to live. The dystopian aspect is well covered with the tyrannical governing body called the "transport police" and their heavy handed techniques, and the rebel force known as TRACE fighting the government.
The characters, Leah, her father, Isaac (an Amish man) are all great, and in my opinion could have been developed even more giving a lengthier novella. I liked the way Leah's mum was referenced and spoken about even though she had previously passed, it helped to give an insight into why Leah was the way she is. I loved the relationship between Leah and her father. Her father feeling the need to attempt to shelter Leah and how Leah returns this feeling of protectiveness. The only downside is that ideally I'd have wanted there to be more, at least a series of novella's. I felt frustrated we didn't get the chance to know what sort of life Leah would have, and how she would cope.
So did I enjoy the novella? Yes, though I did want more! I think the novella could have been filled out, maybe even made into a novel length, the society created and characters were already there.
Would I recommend reading this novella?Yes, it's a great one or two sitting read.
Would I want to read more? If this novella were ever filled out into a full length novel, or more novella's were added and this made into a series I would be interested in reading more, so yes! Also reading this novella has made me take a look at the author of the world it is set in.
Would I want to read more by this author? I have already purchased another novella (Curfew) by this author to read.