BLURB from Goodreads
Behind every myth, there's a spark of truth...There's nothing special about Ben Garston. He's just a guy with an attitude in a beat-up leather jacket, drowning his sorrows in a downtown bar. Or so he'd have you believe.What Ben Garston can't let you know is that he was once known as Red Ben. That the world of myth and legend isn't just a fantasy, as we've been led to believe. And he certainly can't let you know the secret of what's hiding just beneath his skin...But not even Ben knows what kind of hell is about to break loose. A centuries-old rivalry has just resurfaced, and the delicate balance between his world and ours is about to be shattered. 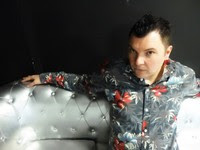 Could you tell us a little about your Ben Garston Series, and your plans for the Series? ie. How many books will there be in the series?

The Ben Garston series envision a world in which the myths and legends of the medieval era actually existed, with a few survivors – Remnants – living among us in modern times, most of them hidden in human form. These creatures, including Red Ben, all live under the Lore, abiding by an ancient and magical Pact that means they’re forbidden to meddle in human affairs. When a centuries’ old rivalry comes bubbling to the surface, Ben is thrown headlong into a race to save the world from a terrible war.
As things stand, there are 3 contracted books in the series, with the follow up out in August 2017. I’m on a journey with Ben Garston too, so we’ll see where he goes. I can certainly see beyond Book 3. Watch this space.

Are Cover Designs & Titles for the rest of the series already chosen? (& Who has/is designing the covers for you?)
We have a title for Book 2. It’s called RAISING FIRE (you heard it here first). I believe I’m about to see an early draft of the cover, also rendered by the wonderful Tracey Winwood. I couldn’t be happier with the CHASING EMBERS cover. It’s as close to my vision as anyone could get and captures the theme and the mood perfectly. I love it.

Do you already know what happens, right up to the last word of the last book in the series?
I’m honestly not sure where the series is headed. I have Book 3 sketched out, but plans can change in the writing and the characters in this series often surprise me! Book 4, if there is one, is a swirl of vague and colourful ideas. Beyond that? It’s as mysterious as any future.

How long did it take you to write Chasing Embers, from the original idea to finishing writing it?
About a year and a half, with another 6 months of editing. Book 2 took about a year. I was up against it.

Is there anything in Chasing Embers you would change now if you could and what would it be?
I wouldn’t change anything plot-wise. I told the story I wanted to tell. I think we all grow and learn as writers and we always should be. That doesn’t stop with publication. You learn from your mistakes and listen to readers, but I don’t tend to look back at any of my work too long because it’s impossible to do so without an overly critical eye. All I can change is what I do in the future, which I hope will be even better!

Checkout the rest of the Blog Tour 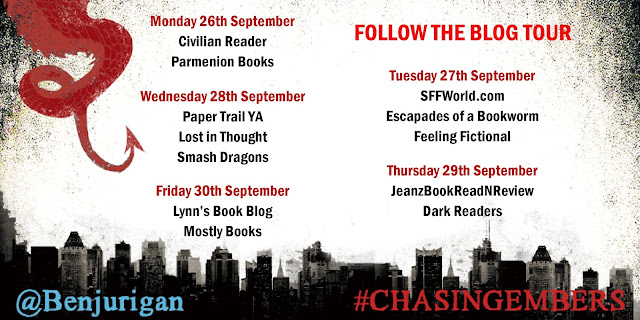