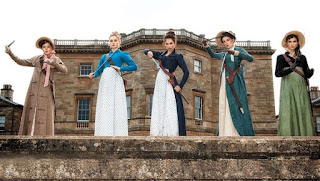 INITIAL THOUGHTS
I should probably point out I am not a big Pride & Prejudice fan as such,
I'd just seen the ads for this DVD on TV and thought it looked entertaining. As a fairly newbie zombie genre book reader, I thought I'd give watching this a go.

COVER
I love the DVD cover for this film. The main feature of the cover being the fighting stance the main characters are in, as if they are in the middle of a fight with the zombies. The characters prominently shown on the cover are three of the Bennet girls, Mr Darcy, Lt. Wickham, Mr Bingley, Parson Collins and Lady Catherine De Bourgh. As you'll know if you have read any of my book reviews, I do love a good byline! On this DVD cover the byline says "Slay With Pride, Kill With Prejudice"

REVIEW
I purchased this DVD from Amazon UK. So although I wouldn't say I'm a big fan of the original Pride & Prejudice, I know the gist of the story. I will say I hadn't realised that this DVD was a book to movie adaptation.
So as you will have guessed this is basically Pride & Prejudice, with the extra addition of zombies on the rampage. The five Bennet girls have been trained in all the correct etiquette required for the era they are living in. Their parents typically want to marry each daughter off to a wealthy husbands to secure them an easy life. The Bennet estate is bequeathed to a male in the family so once their father dies the girls will have nothing.
The danger of zombies means people are trained in the different arts of defense. There are mixed opinions as well as snobbery attached to whether you were trained in Japan or China.
Zombies feed on human brains and the more brains the zombies feed on, the less humanlike they are. Though there is a view by some, that if caught early enough in the zombification process they are fed pigs brain and attend church that the zombies can keep a lot of their humanity. A large wall is built to keep the zombies out of the "posh area" but even that comes under threat!
I think the choice of Matt Smith as Parson Collins is brilliant, he adds comedy and really camps things up as a character who is very exuberant during a dance at a ball. All the actresses chosen to play the Bennet girls are believable both as "young ladies of good breeding" as befitting the era and make excellent kick butt zombie killers too!
So although I did like the whole cast of characters I did have a few favourites. I loved Sally Phillips who played the Bennets girls' mother, she added the perfect amount of ditzy to her role whilst remaining believable for the era the film is set in.
There's plenty of zombie attacks and fighting scenes as well as some swooning and era relevant parts in the film. I loved an early scene where Mr Darcy is investigating a zombie sighting/tip. To find the "zombie" he releases some flies from a small bottle, he waits whilst they are buzzing around and when one of the ladies in the room questions their use and how noisy they are he explains it is not the buzzing sound the lady needs to worry about. The danger is when the flies land and stop their buzzing. . . as that means they have found a rotting corpse!
I was surprised by the twist at the very end. I thought we had seen the end of one particular character (I won't say which as I don't want to spoil the film for you) and then they reappear at the very end of the film.
I enjoyed seeing the costumes of the 19th Century as well as how the Liz and the other Bennet girls adapted them to conceal their zombie fighting weaponry. 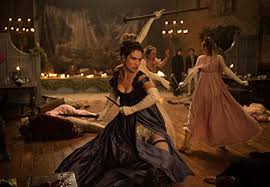 The scenes where the girls are under attack from the zombies are very well choreographed, which makes them look believable.

FINAL THOUGHTS
I did enjoy the film. I actually admit to liking it more than I thought I would! There's plenty going on throughout the whole film, right up until the very ending. The film has action, fighting, betrayal and suspense all thrown in together with romance, and old England traditions of courtship and what a lady should or shouldn't be doing. I also found the soundtrack of the film quite good too.