REVIEW - THE AUCTION BY ELCI NORTH 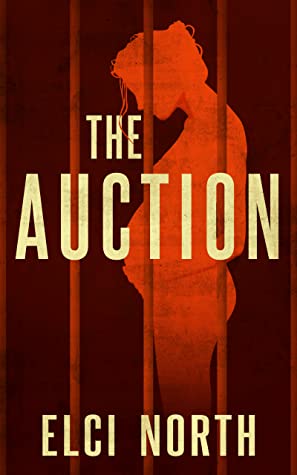 Logical computer programmer Jane overindulges at a graduation party, winds up pregnant, and is forced to marry a near-stranger. Drama queen Angelica bets a gay guy in a bar that he couldn’t “do it with a woman.” Pregnant Angelica loses her job and the love of her life. And after 13 years of trying, Millie finally conceives, but sitting vigil at her severely injured husband’s bedside takes priority. Fifteen-year-old Wendy loves school and art, but an ex-convict breaks the glass from her window and rapes her.

Their paths cross when they are sentenced to the same pregnancy prison. But as lawmakers know, putting women together can lead to ideas. Ideas that could end the baby auction and bring down the government.

REVIEW
It was the image on the cover that first drew my attention to this book. The image of the pregnant woman behind bars is certainly a compelling one. Then once I read the blurb, I knew that I absolutely had to read it.

Sadly, the society within the book is not all that unbelievable when you look around and read the news articles right now from different parts of the world. The society is run by men and of course this means that the world is angled and in favour of the male race. The government is made up of men too, the head of which is President Boyce. President Boyce’s ideal, that he pushes everyone to strive to is his vision of the “Halcyon Days” basically what the male government see as the “good old days.” His good old days consist of the women at home having babies, doing all the housework, with a pretty dress, face full of makeup and dinner ready on the table when the bread winner husband arrives home from work. The government and their vision of the Halcyon Days is an extremely discriminatory one. When it becomes apparent that the government needs more money for the running of the country, they begin to use babies as a source of income. A system is created where families “give a baby, and, take a baby” When pregnant women have their children, they leave their baby at the hospital. Most of the time they don’t even see or hold their own baby. This procedure is referred to as “giving a baby.” Later the babies are put up for auction. This is the other part of the procedure “taking a child.” There is a set minimum bid amount, that all babies make. If the parents that give a child are poor, they are given a loan, a “Family Development Loan” which is “offered” or rather “given” by the Office Of Reproductive Oversight. This loan is for an 18 year term which is free of interest for just the first 6 months. If the baby you give up is sold for over $35,000 the parents receive 2% of that amount.

Women are really not allowed to work unless they meet very specific criteria, which are, that they have completed the menopause, are sterile or carry a severe genetic disorder which would mean the baby would be a burden of the health & welfare and cost the government money. In other words, they cannot have any/any more babies! There are only a few jobs women are permitted to do and those are not influential positions. Women are not allowed to own a business at all. Even when women are “conforming” and are pregnant they have to keep up certain conditions and have regular checks whilst pregnant. If the government think the women is in contempt of any rules and/or is not caring for her unborn baby, the woman will have to go to a Home for Pregnant Women or as they are referred to by the normal population as “pregnancy prison.” Women also have to marry the biological father of their baby, or if they are not available, a male member of the biological father’s family. There are no excuses for not marrying the biological father of your baby. Even the word “Rape” is literally outlawed. President Boyce and his government simply do not recognise rape, there is no such thing, it is the fault of the women, she led the man on past his point of control, so it is all her own fault! The government is also very prejudiced against any other sort of disability on one level, such as those disabled have to prove they can live independent lives to be allowed to get married. If they cannot prove this then they must remain with their parents until their parents die and then they are put in an institution and are not allowed to marry or procreate. Yet when it comes to the auction and the whole “giving a child and taking a child” all parents are informed is that all children are lovable, that there is no such thing as “maternal instinct” women can and will love which ever baby they buy and bring home form the auction. Those who have access to plenty of money can afford to purchase not only a fit & healthy child but one that has certain genetic markers they find appealing too. Those with little money have to buy the less healthy, perhaps disabled babies that are left until last that no one else wants. They then have to care for that child for the rest of their life and that of the child. The government also stresses that there is no such thing as maternal instinct, so parents should accept whichever child they purchase at the auction and love and care for it as much as if it were the baby they created.

The government has been run a long time by President Boyce, others have tried to topple him and all have failed but there is a new candidate now, a woman called Wilma Harding the head of the Traditionalist party.

The book gives some background of the very different main female characters of, Jane, Angelica, Millie, Wendy. Soon they all have one thing in common, for different reasons, they are all sent to “pregnancy prison.” The book reveals their different stories of becoming pregnant, Millie who is blind and very much in love with her husband, Jason, and they have been trying for years to have a baby. Wendy a young teen who hasn’t even finished school who was in bed one night and a man broke into her home, through her bedroom window and raped her, she became pregnant and had to marry the biological father of her baby. Each women had a different tale. They each followed a different path, to how they ended up being pregnant. The women in the McKee Home For Pregnant Women have restricted access to the telephone and also limited visiting hours for their partners or loved ones to come and see them. None of the women are happy to be in the home except Wendy who is relieved to be away from her “psycho husband” as she refers to him. Angelica has a boyfriend, Angus who happens to be a top lawyer, Jane’s husband, Dave, is a computer whizz, Millie’s visitor is neighbour Beverley, and these are the only contacts the women have with the outside world. Angus, Dave and Beverley put their heads together initially just to get the women out of “pregnancy prison” and then set their sights even bigger, they want to bring the whole system of “The Auction” down.

I could honestly go on and on telling you even more about the book and I probably seem like I have revealed a lot already but there is so much more to the book too. The intricacies of each womans background, how they became pregnant, how they ended up in pregnancy prison, what they want from their future etc. Then of course there are secondary characters and their stories too. The world building is brilliantly done, it is so believable, and so skewed against women, you end up hating President Boyce as much as Jane, Millie, Angelica & Wendy do! There is still quite a bit of humour in the book, such as the description of the director of the pregnancy prison, Candy and her hair that literally has you visualising this ditzy, petty, candy floss haired women who thinks she is superior to these women. As well as the women’s stories being told there are “Flash News Brief” pages between the chapters up dating you on what is happening within the world, outside of the pregnancy prison.

My immediate thoughts upon finishing the book were Oh Wow! How very eerily believable with how our world is currently seeming to go backwards on women’s rights!

Summing up I loved this book, and it was quite funny that I was watching Handmaids Tale which also has the theme of men being in charge, and women being oppressed as well as similar themes. There was just one thing missing for me at the end, maybe a bit of a loose end, which obviously I cannot really go into, but I will just say it was regarding the character called Wendy, apart from that it was a really great read! I will certainly be keeping my eyes open for other books by this author.